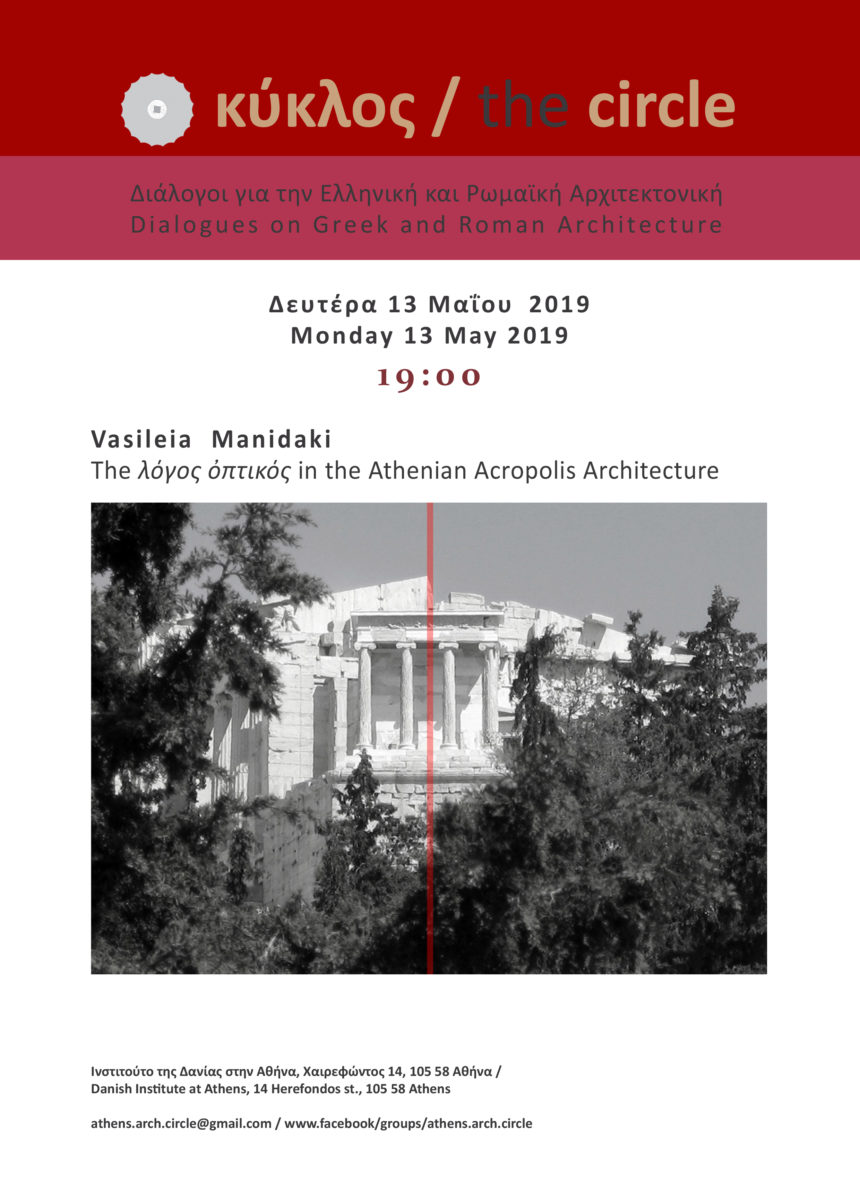 The λόγος ὀπτικός in the Athenian Acropolis Architecture

The next lecture of the “THE CIRCLE, Dialogues for Greek and Roman Architecture” will be given by Vasileia  Manidaki , Architect NTUA, The Acropolis Restoration Service (Y.S.M.A), Hellenic Ministry of Culture.

The topic of the lecture is “The λόγος ὀπτικός in the Athenian Acropolis Architecture”.

The λόγος ὀπτικός in the Athenian Acropolis Architecture.

The depth, the clarity, the degree, the completeness, or the absence of visibility are basic tools in the hands of architects who are planning their work within the urban fabric; this is the λόγος ὀπτικός according to Vitruvius, who prefers to use the Greek term for the regulation of visibility and the treatment of viewing.

Visibility is the heart of the physical relationship between viewer and building. And it is more than that. Particularly in the case of a Classical Greek temple, visibility has associations with monumentality, impressiveness, memory, symbolism, divine epiphany, divine protection, designation of a landmark in urban scale, formation of the city identity, demonstration of wealth and power, inspiration of emotions like awe, and pride.

Of course, there is no architectural work where visibility has not been taken into account; however, the study of the planning of temples and other important public buildings of the ancient Greek city has not received the importance it deserves. When the question comes to the grouping or to the synthesis of buildings in Archaic and Early Classical cities, the usual studies, based on the measure of the foot unit, a modular system, a grid, or a proportional system do not offer solutions. In the historiography of the Greek architecture, the phenomenon of asymmetrical synthesis has been considered as a result of the picturesqueness of the composition, or of optical corrections, or of the orientation towards a sacred landmark, and most intriguing of all, as part of the concept of σκηνογραφία, the third sort of Greek drawing as described by Vitruvius. In my understanding, the aspect of visibility could be relevant to all approaches above, but at the same time could be useful as a methodological tool for the interpretation of the given physical evidence.

In this paper-a study in progress- I will concentrate on the Late Archaic, Early Classical and Classical period of the Athenian Acropolis. I will deal with the planning process of architecture by examining visibility as a criterion for the siting of buildings within sanctuaries, and the synthesis of the buildings in an ensemble. After defining the terminology, the clarification of the subject, and a short overview on the historiography of the older research, I will deal with previously known and new evidence from the Athenian Acropolis, the testimonies from ancient sources and some ideas that are implied by this evidence. Finally, I will attempt an explanatory synthesis that brings these ideas together.