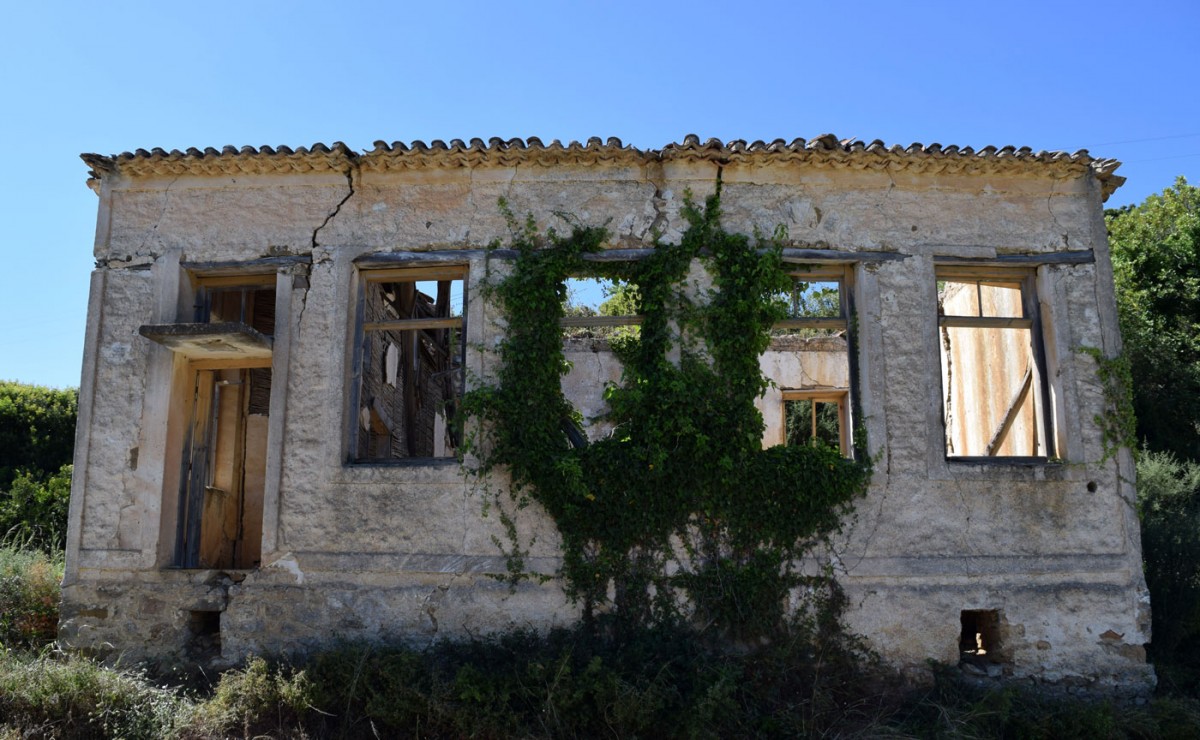 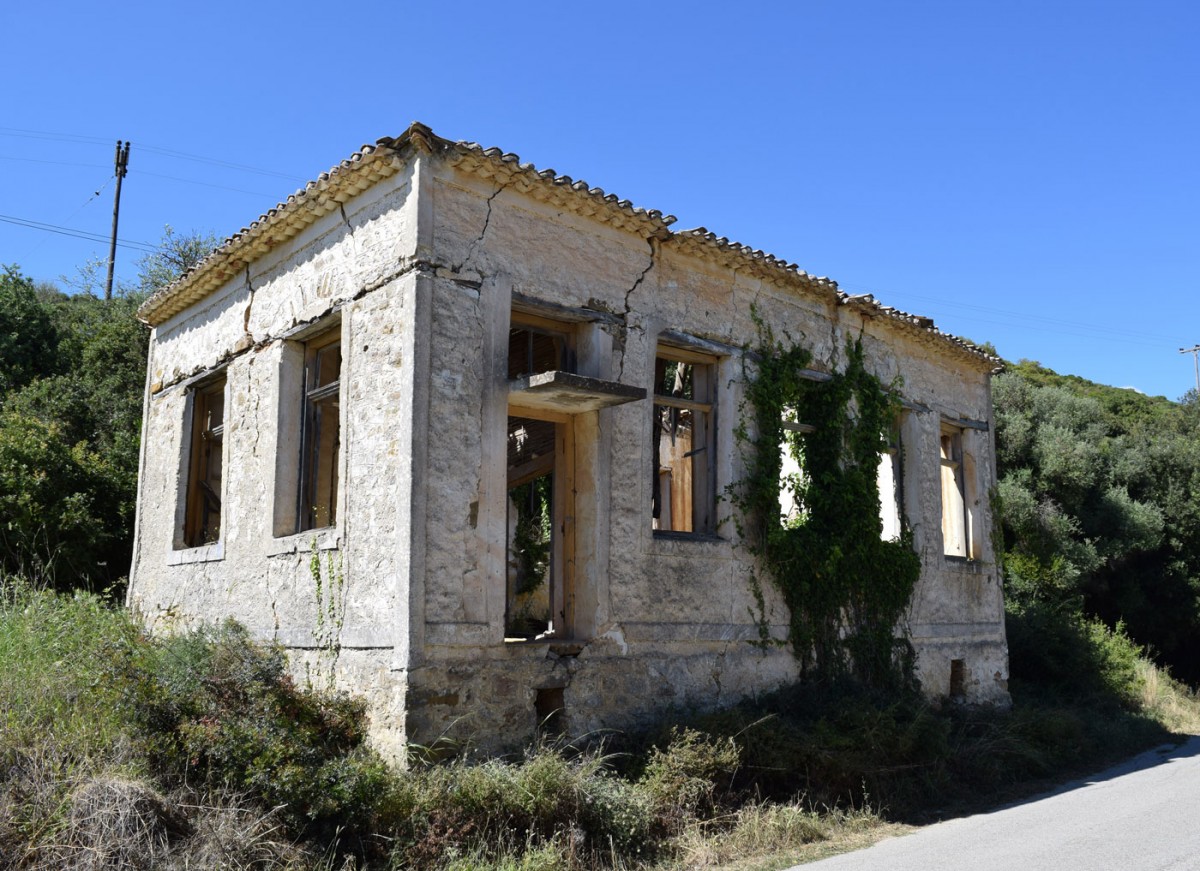 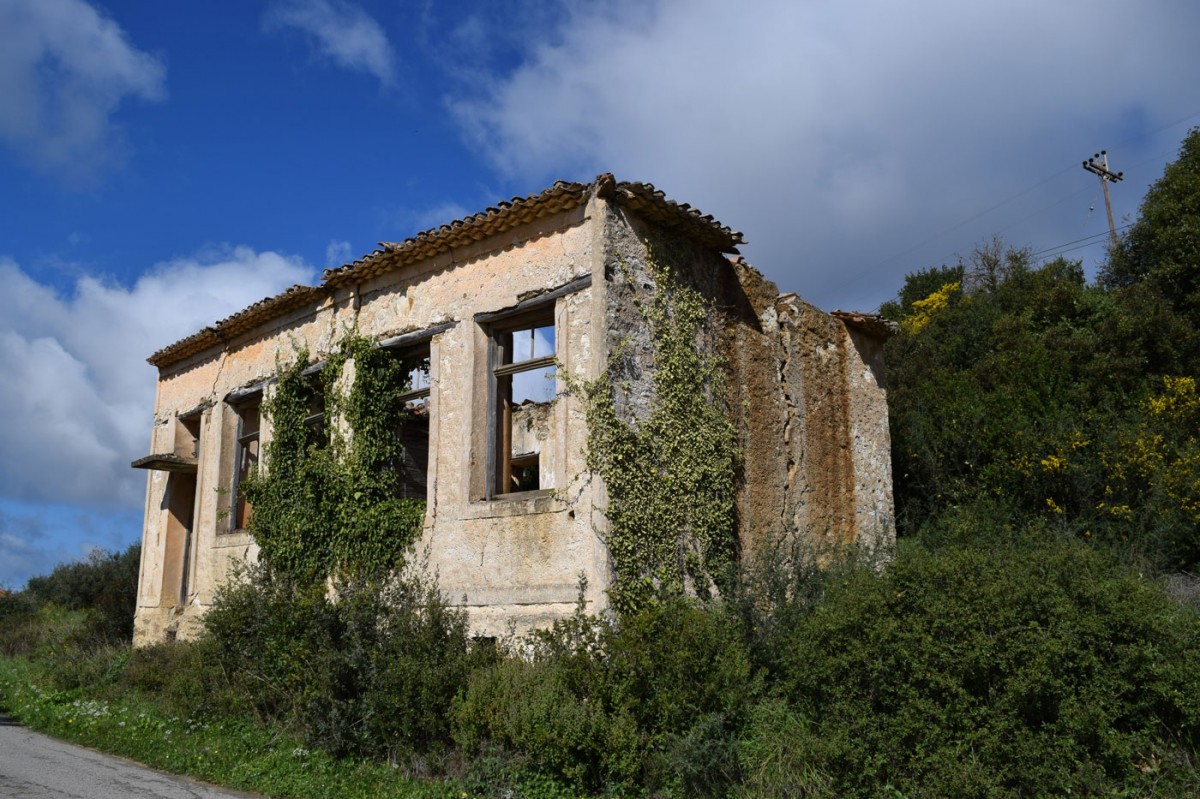 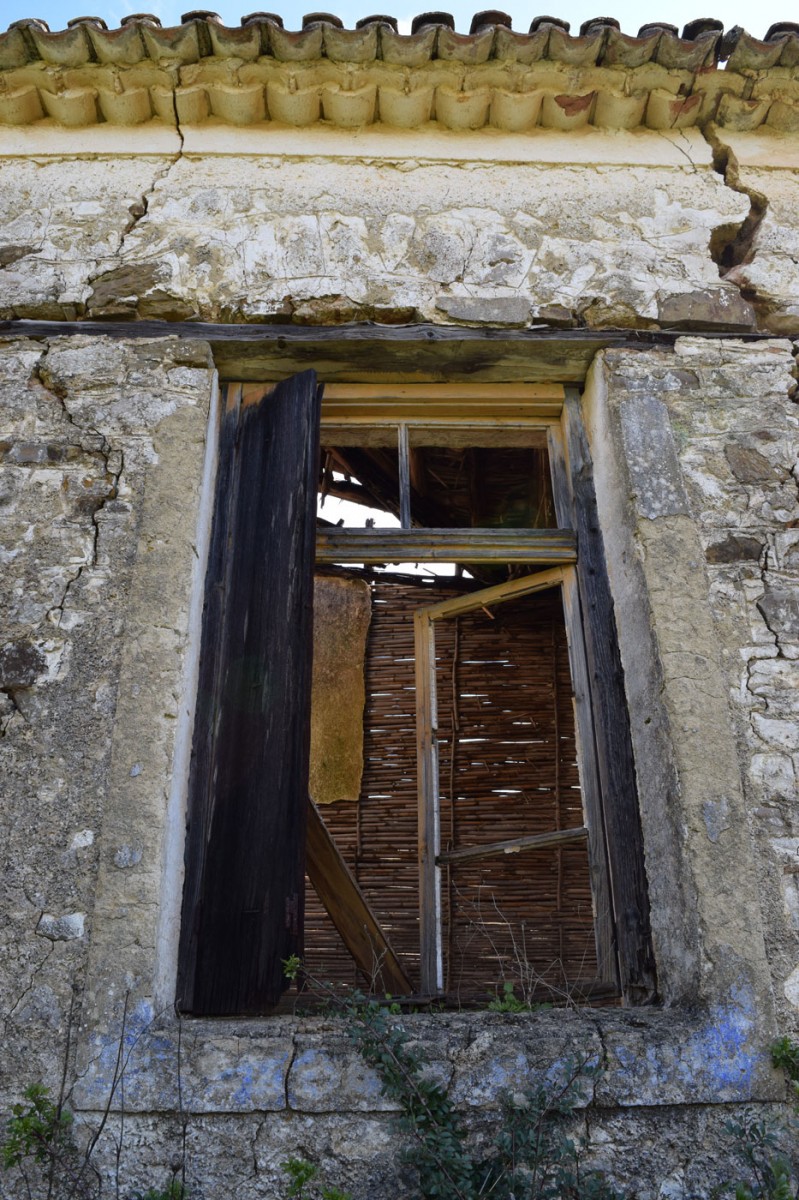 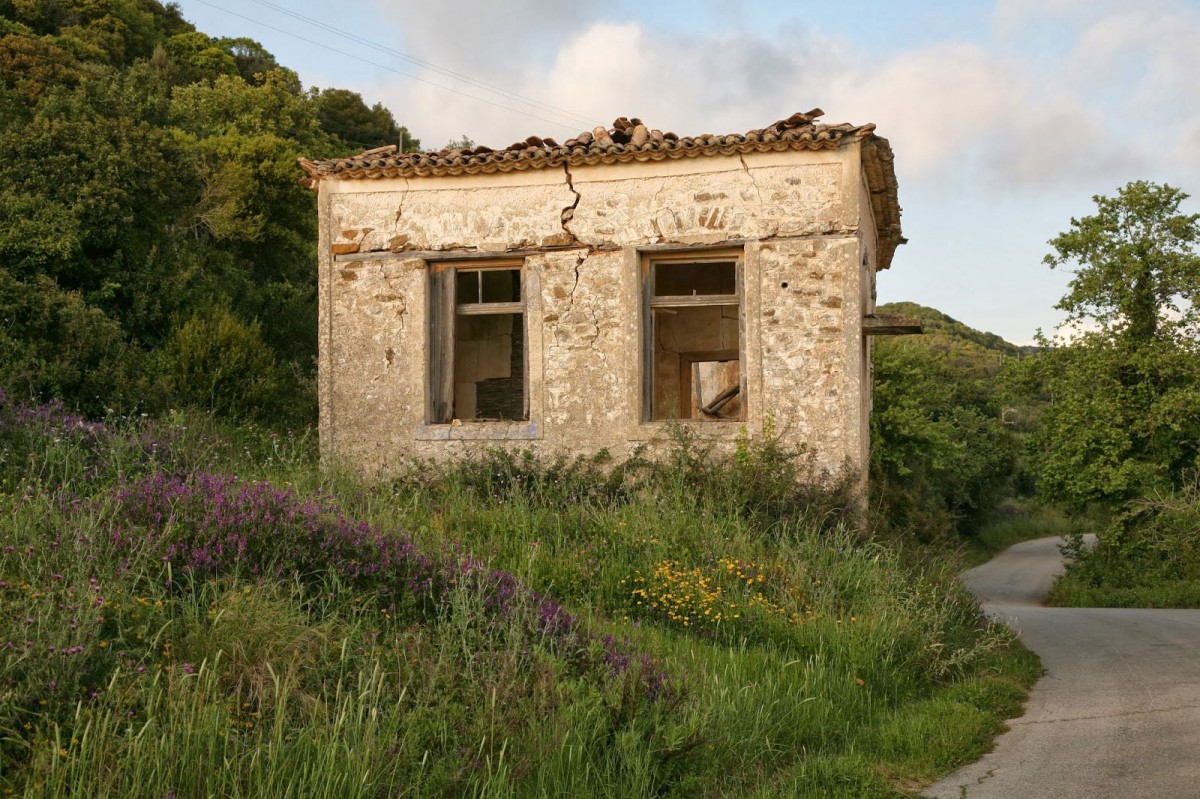 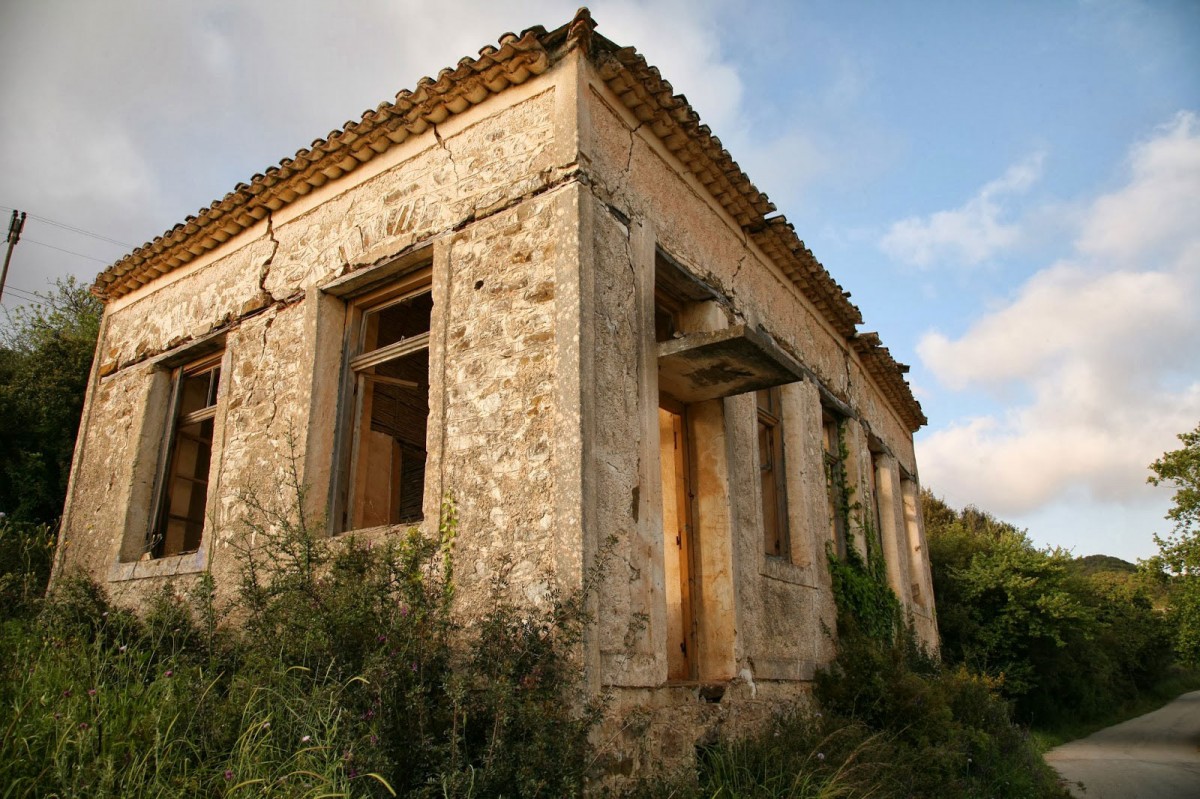 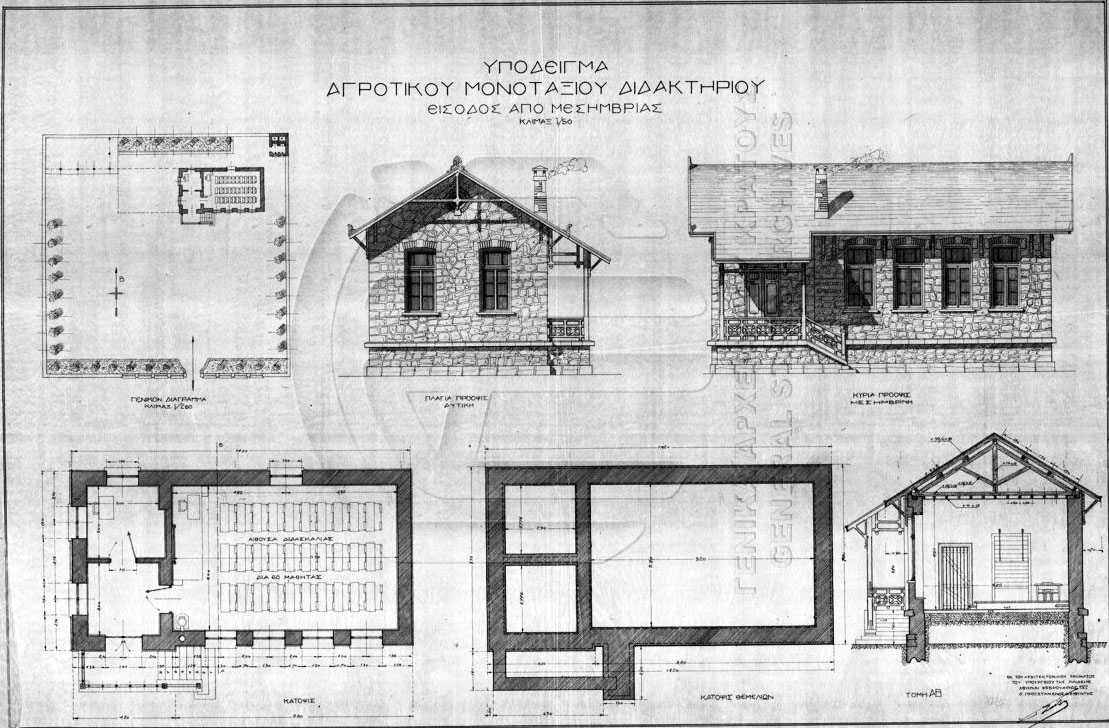 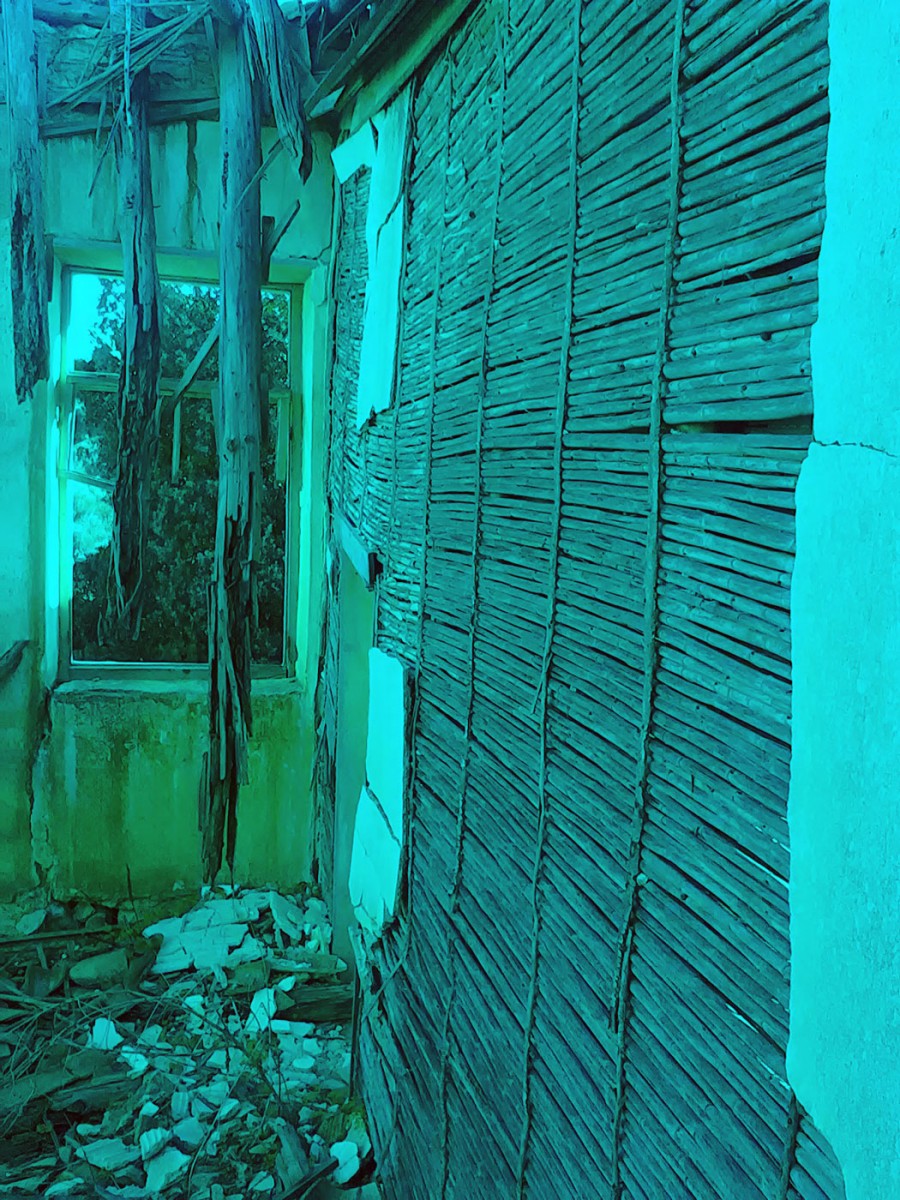 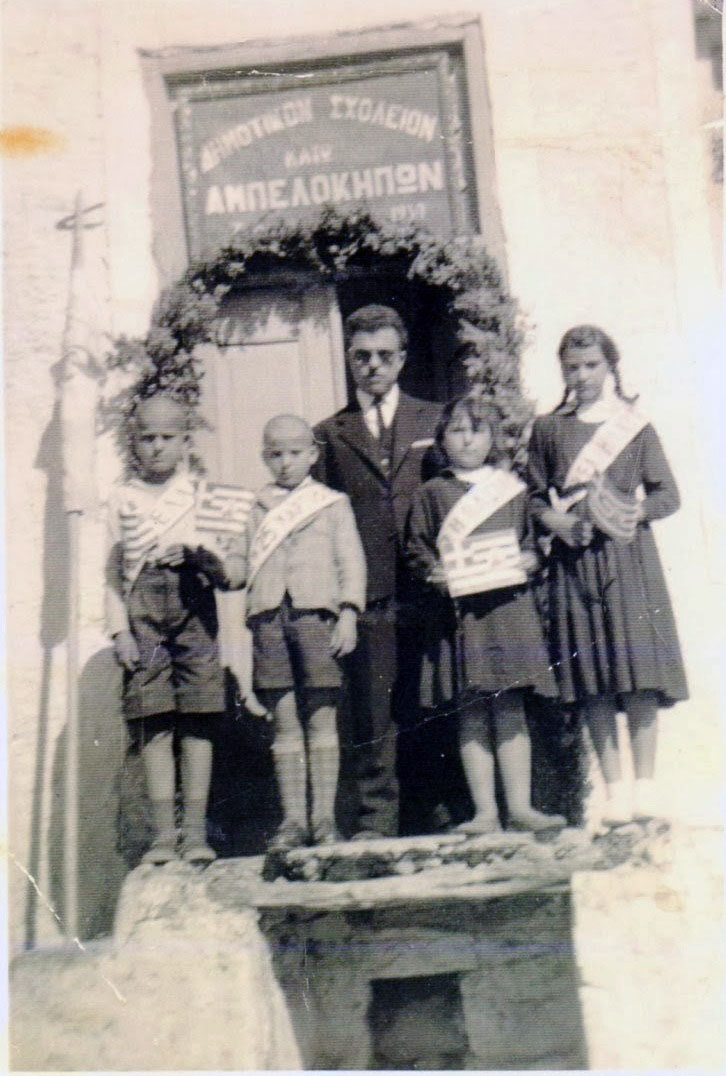 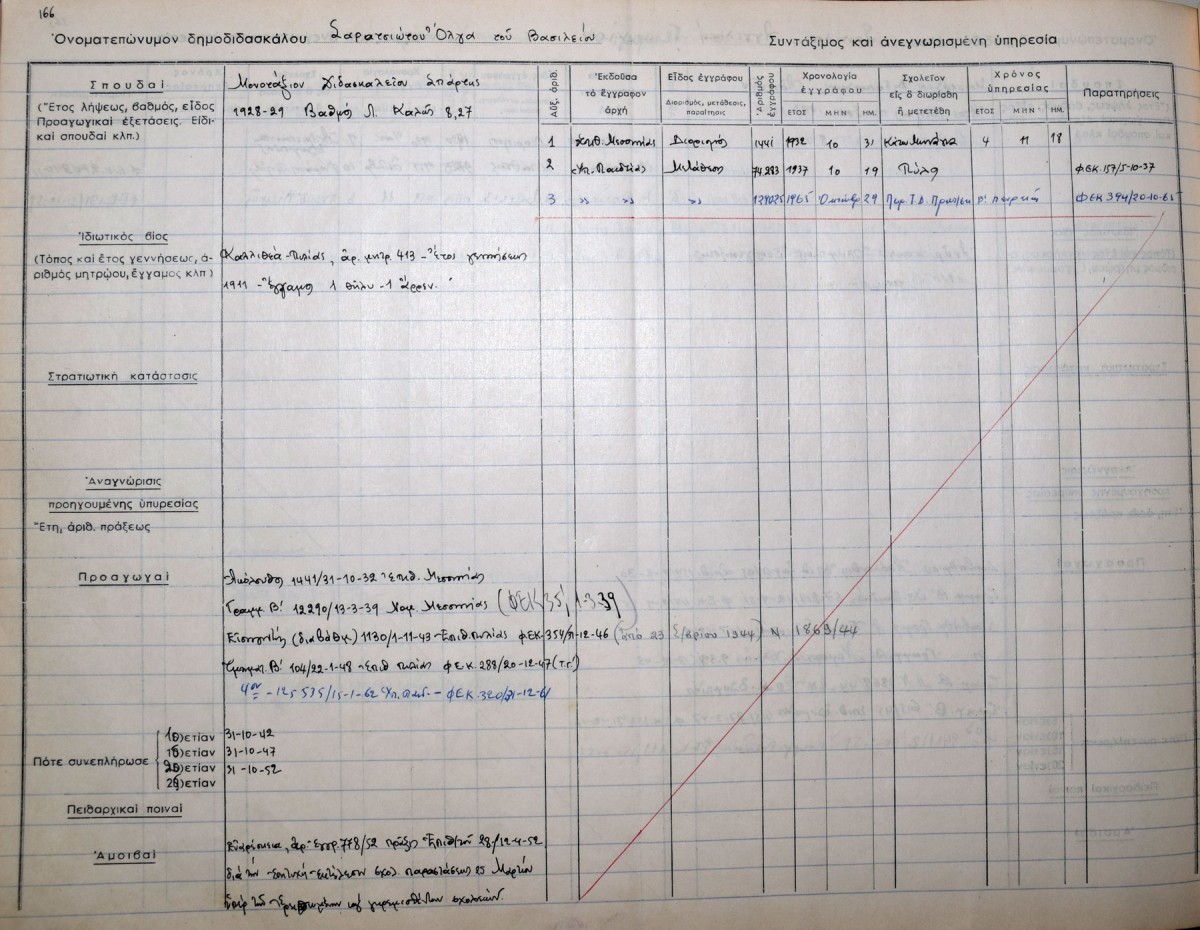 A historic monument waits to be rescued and restored

The region of Kato Ambelokipi is situated in the central hinterland of south west Messenia, cut vertically across by the limits of mount Lycodimos which reach an altitude of 340 meters in this semi mountainous district. Its terrain is hilly and was difficult to access till at least the mid 1950s. This region of the Kato Ambelokipi settlement is the passage from east to west Pylia. It is here that the ruined Primary School building of the settlement is located, which from 1941 to 1944 was the historic headquarters of the Greek Resistance in south Messenia. It is a building full of culture and history that has left its mark on the area.

The historic building was constructed between 1932 and 1934 by the then Ministry of Education, according to the standard architectural design (now in the State Archives), of an agricultural, single classroom school of the 1920s. Itis 10.7m long, 7m wide and is entered from the south. On the main southern façade it has four windows, with two on the side west façade. On the north side it has two additional windows and none on the east. It features one classroom for 60 students, a hall and a teacher’s office. The building was constructed by traditional stonemasons known as “Tsafaraious”, from the settlement of Chomatada, as well as with voluntary work by the locals.

It is worth noting that a tremendous struggle was required, both for the building’s construction and for it to be formally established as an institution. Lack of money and a road network drove the locals to fund raising in the greater area of Pylia, so as to collect the money required.

At the same time, the absence of building materials lead to innovative solutions for that era, such as the creating of a limekilnand transportation of materials from distant regions by horse ,donkey or mule. Last, the pressure put on the state for establishing the primary school as an institution, was because, by decree of the Venizelos government in 1929, the limit for founding a one classroom primary school in a settlement went down to 15 students. The aim of the new legislative measure was to fight illiteracy, since, according to the 1928 census, there were 3,500 settlements with less than 15 children of school age and so every year over 25,000 children did not attend any school.

The primary school opened in September of 1935 in an enthusiastic, emotional climate and its first educator was the primary school teacher Olga Saratsiotou who came from the Kallithea settlement in Pylia.Saratsiotou taught for the first two years and in September 1937 she handed over her position to the primary school teacher Konstantinos Gemelos, who came from Asia Minor and had arrived in Greece in 1922, during the Asia Minor catastrophe. Gemelos was young, elegant and brought to both school and settlement a new air of culture and activity with his innovative educational and cultural work. Like a modern Aristotle he changed the idea of the classroom, introducing “early morning walks” (εωθινούς περιπάτους), during which he would teach his young pupils in the natural environment. Another of his educational innovations was publishing his pupils’ best compositions in small books called “Small Diamonds” and distributing them to primary schools in the greater area. At the same time, Gemelos organized unique cultural activities, such as theatrical performances, musical events thanks to the first gramophone he himself brought to the settlement, photography lessons and educational trips outside the settlement boundaries, with trips to major monuments and archaeological sites in the region of Pylia.

This educational work was violently interrupted with the outbreak of war in October 1940, when the late teacher was drafted and the school closed. In September 1941, the school opened again, in fear of the German and Italian occupational forces. On September 27, 1941, the National Liberation Front (EAM) was founded, with the aim to free Greece from its occupiers and safeguard the sovereignty of the Greek people. This lead the EAM committee of the Pylia province to set up headquarters of the National Resistance movement in southern Messenia in the primary school of Kato Ambelokipi (then called Kato Menagia). This strategic decision was taken bearing in mind the important parameter of the settlement’s geographical location; i.e. it was isolated, had difficult access and was situated in the centre of southern Messenia. Thus, it was the most suitable spot to set up headquarters that would organize and guide the resistance struggle against the occupiers.

So, between 1941 and 1944, the primary school building was the headquarters of the councils and decisions made by the EAM in Pylia, while the teacher Konstantinos Gemelos became a member of its provincial committee. At the same time, the building functioned as a home for resistance fighters fleeing the occupiers and as a place of supplies for the resistance organizations in the greater area. In October 1943 it became the quarters for the first armed section of the Greek People’s Liberation Army (ΕΛΑΣ) that came to Messenia and a place for meetings and councils of their numerous members.

The headquarters’ activities culminated in the “Pan-Pylian Conference” of the EAM’s provincial committee, whose secretary was Dionysios Komoutsakis from Methoni and the topic was the organizing and carrying out of elections throughout the country, that took place in February 1943. Taking part in the conference were all the leaders of south Messenia, such as veteran Major Elias Clapas from the Harokopeio settlement and Yiannis Chronopoulos or “Raphael” from the settlement of Mesochori, who was secretary of the provincial council of the Panhellenic Youth Organization (EΠΟΝ) in Pylia.

As part of their important activities, those of the organization’smembers with some technical skills exploited the Menagiotiko torrent in the area and the great volume of water passing through sloping territory. They created a hydroelectric plant, a marvelous local invention, in the oldest deserted watermill of the district, situated at a steep point of the Menagiotiko valley. The historic “Old mill” [Παλιόμυλος] was a 19th century watermill that, according to an 1841 document from the State Archives, passed from ottoman ownership to state owned land and was then auctioned. The hydroelectricity aimed to charge a car battery which wasthentaken by the organization to a nearby active watermill to operate a secret radio.At the same time, with the use of a typewriter, a press release was written called “The Fighter” [Ο Αγωνιστής], with news broadcast by the BBC, Cairo and Moscow. Then, every week, through the headquarters and members of the organization, the press releases circulated with absolute secrecy among all the settlements in the greater area.

Through the operations of the EAM headquarters, the occupational forces were informed about the possible existence of a pocket of national resistance in that particular region. So on April 4 1944, joint military forces of Germans and men from the Greek Security Battalions arrived at the settlement of Kato Ambelokipi. The EAM organization had been informed and had managed to smuggle out of the settlement both weapons and the male population, leaving behind only women, children and the elderly. Simultaneously, everything that could be used as evidence was smuggled out of the school and the building was transformed by the organization into a deserted place with a few broken window panes and then locked. The Germans rounded up all the remaining inhabitants in a walled courtyard and started thorough investigations in all the houses, in search of evidence of organized resistance but found no trace whatsoever. For the time being, at least, the settlement was safe from being burnt down and its inhabitants executed.

A few months later, however, in August 1944, mountain artillery of Germans who were in Petalidi, attacked the settlement, on being informed again about pockets of organized resistance in the region of Kato Ambelokipi. The dry hissing sound of the first shell broke the silence of the night and fell on the settlement outskirts. The ELAS ammunition was in the heart of the settlement, inside a warehouse belonging to a local guerrilla. Two Cretan guerillas from the division of Crete, trapped in the district and responsible for guarding the ammunition, moved it throughout the night outside the settlement to a predetermined spot, for fear of possible shell fire inside Kato Ambelokipi. The barrage of artillery shells did not find the target and so, once more, the EAM headquarters and the settlement were miraculously saved.

With the departure of the German forces from Greece in October 1944, the headquarters of EAM’s national resistance, having contributed in full to the struggle for the country’s liberation, returned to its original educational role. In post war years, the school will again become a beacon of learning and culture for hundreds of pupils who later distinguished themselves in many fields. InJune 1970, however, itsbellrangforthelasttime. The school closed down fοr good because of a perpendicular crack on the east side of the building, resulting from a technical failure and strong seismic activity in the area. Over the next five years, until 1975, the settlement’s pupils are obliged to attend classes at the primary school of the nearby settlement of Kallithea. In September 1975, the school bell will ring again in the settlement, in an auxiliary building belonging to the church, until June 1981 when, due to a lack of the required number of students, the school will finally close.

The building that captured major historical and cultural events of Messenia has been almost entirely destroyed, due to the abandoning of closed schools in the years that followed. This is part of political and social inertia, combined with ignorance of history and forgetfulness of historical buildings located in remote rural areas. Today, the visitor that finds him/herself in front of this historic monument will certainly feel sad and bitter while trying to understand how the past relates to the present and the relationship of the existing building with the history of the region. This monument, however, could be a historical and cultural reference point for the whole of Messenia. By restoring it architecturally and aesthetically, all human geography of the area, in a historical context, could be displayed there in an exhibition whose theme would be local history as recorded in this exceptional monument of culture.

Perhaps, recent awareness shown by the prefecture of the Peloponnese, regarding the necessity to rescue this historic monument of Messenia, will lead to direct actions required for funding and restoring the building identified with the resistance and struggles of the Greeks for freedom and independence. Not only will an architectural and historic monument of Messenia be rescued, but our collective identity and dignity as well, both in the eyes of those generations that constructed this building and struggled for the country’s freedom and in those of the future.

PhD Candidate of the Department of History, Archaeology andCultural Management,University of the Peloponnese