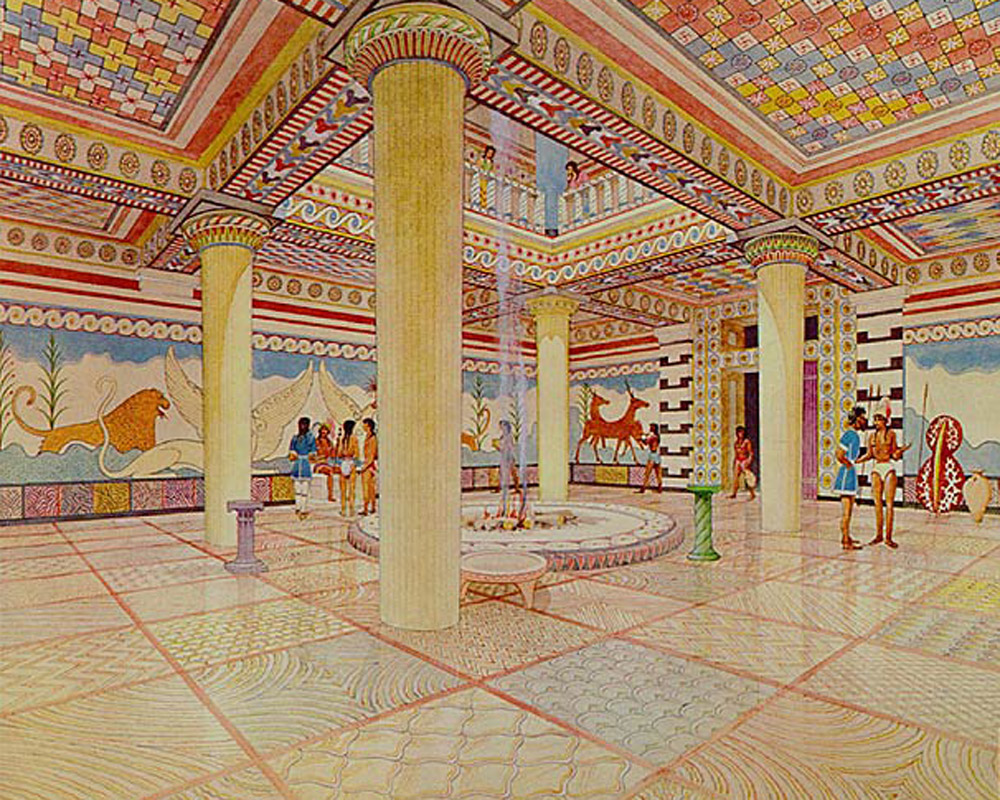 Simulating a combination of carpet and stone

The floors of Greek Bronze Age palaces were made of plaster that was often incised and painted with grids containing brightly colored patterns and/or marine animal figures.

In researching one such floor in the Throne Room at the Palace of Nestor, one of the best-preserved palaces of the Mycenaean civilization, University of Cincinnati Department of Classics doctoral student Emily Catherine Egan has found evidence that the floor’s painted designs, dating back to between 1300-1200 BC, were meant to replicate a physical hybrid of cloth and stone – serving not only to impress but also to instruct the ancient viewer. These observations formed the subject of Egan’s presentantion at the Annual Meeting of the Archaeological Institute of America, Jan. 2-5, in Chicago, one of a number of UC presentations at the conference.

Egan’s work at the Palace of Nestor builds on a long tradition in UC’s McMicken College of Arts and Sciences since the remains of the site were first discovered in 1939 by UC archaeologist Carl Blegen.

According to Egan, “Mycenaean palatial floor paintings are typically believed to represent a single surface treatment – most often cut stone or pieced carpets. At Pylos, however, the range of represented patterns suggests that the floor in the great hall of the palace was deliberately designed to represent both of these materials simultaneously, creating a new, clever way to impress visitors while simultaneously instructing them on where to look and how to move within the space.”

As part of her work with UC’s Hora Apotheke Reorganization Project (HARP), Egan conducted research on the painted floor at the Palace of Nestor from 2012-13. She examined firsthand sections of the floor, as well as published and unpublished excavation documents and drawings.

During her research, Egan noted that some of the intricate motifs of the Throne Room floor recalled the mottled and veined patterns of painted stone masonry, while other elements mimicked patterns on depictions of textiles in wall paintings both from Crete and the Greek mainland.

She contended that the hybrid combination of these materials on the Throne Room floor (also evident in other paintings in the palace) was specifically designed to “supersede reality. It depicted something that could not exist in the real world, a floor made of both carpet and stone. As such, the painting would have communicated the immense, and potentially supernatural power of the reigning monarch, who seemingly had the ability to manipulate and transform his physical environment.”

Egan also argued that the hybrid quality of the floor was intended to draw attention to one of its other notable features – a dramatic diagonal in the grid design, apparent upon standing at the doorway of the room. Past studies had posited that this introduction of a strong diagonal into the floor’s otherwise regular grid pattern had been an uncorrected mistake.

However, Egan’s first-hand examination of parts of the floor found evidence that small mistakes on individual painted tiles had been corrected by the ancient artists. Thus, she reasoned, “Since they corrected such small mistakes, it seems highly unlikely that those same artists would have left a major error, like mis-aligning a large portion of the room’s floor, uncorrected. Instead, I believe that the diagonal was intentional – a way to draw both a visitor’s eyes and his or her footsteps toward the throne positioned along the right-hand wall of the room. It was painting with a purpose.”

In addition, Egan’s study at the Palace of Nestor has uncovered the first evidence for the use of a drafting technique called an artist’s grid to paint a floor. Until now, artists’ grids have only been identified in Bronze Age wall paintings, almost all of them from Crete. (An artist’s grid is just that, a faint grid laid down on a surface to be painted in order to subdivide that surface and aid in breaking down and accurately spacing a complex, repeating pattern or design.)

According to Egan, “A fragment of wall painting from Pylos shows evidence of the use of an artist’s grid, and nine squares of the Throne Room’s floor feature the same technique. As on walls, the floor grids were used to create a range of sophisticated, balanced designs – only this time on a horizontal rather than vertical canvas. This find is particularly exciting because it solves a long-standing riddle. When first excavated, these ‘mini grids’ were tentatively identified as functional elements of the room – marking out places for dignitaries to stand on occasions of state. My re-study of the grids, however, now shows that they were artists’ tools, providing us with important new information about how the painted floor was designed and constructed.”