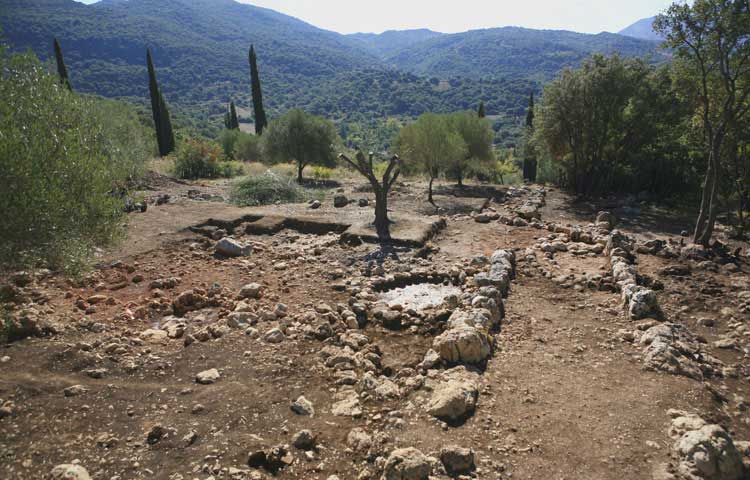 The second lecture of this year’s Mycenean Seminar will be given by Dr. Antonis Vasilakis, Honorary Director of the Ministry of Culture and Tourism, and Former Ephor of Antiquities of Kephalonia, Ithaka and Zakynthos. The lecture will focus on the large apsidal/ellipsoidal (ovoid) building of the Late Helladic II-III period, which was uncovered in its entirety in 2012, almost down to floor level.

Part of the building had been discovered and excavated during the previous excavation period. The perimeter of the building is 45 m and it covers an area of 168 sq. m. The exterior wall is 1.20 m thick and the interior walls 0.80 m. It is an irregular apsidal or ellipsoidal /ovoid shape. The interior of the building is divided, along the north-south axis, in three unequal sections. The middle section is subdivided, on an east-west axis, into two rooms, i.e. a total of four large rooms. Identically or similarly shaped buildings, already present during the Middle Helladic period, are attested in contemporary Late Helladic architecture all over the mainland, from Messenia, up to central Macedonia, the closest parallel being the ellipsoidal Megaron B, at Thermon, in Aetolia. This is the first time that a megaron of this type and size has been unearthed at Kephalonia, an otherwise heavily Mycenaeanised island, judging by the rich cemeteries excavated over the years. Its discovery at Tzannata contributes significantly to our meagre knowledge concerning the domestic architecture of this period in the Ionian islands. The location of the Late Helladic-Mycenaean settlement at Poros, combined with the nearby royal tholos tomb, excavated in 1992, suggests the need for a re-examination of the theories concerning the historical reality of the territory controlled by Odysseus, the king / wanax of the Kephalenians and of Mycenaean Ithaca. The latter should, as the speaker of the lecture will stress, be indentified with this site, on the basis, for the first time, of ‘instructive’ archaeological stratigraphical data.

Where and when:
in the Alki Argyriadi Amphitheatre (Central Building of the University of Athens,
Panepistimiou 30), at 19:00