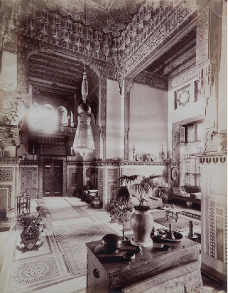 Mercedes VOLAIT, InVisu (CNRS – INHA) will address the topic “The Commodification of Islamic Artefacts in late Ottoman Cairo and Damascus before Benakis Time: a Story of Supply and Demand”.

The lecture is presented by École française d’Athènes.

The lecture aims to explore new ground on the global consumption, from the mid-19th c. onward, of what we term today “Islamic art”. It intends to do so by looking into both its international and domestic dimensions. While there is literature on the former, the latter has been little considered so far. Research on Islamic art collecting during the 19th century has helped to map varied rationales for the Western appropriation of artefacts of Cairene or Damascene provenance; their connections to World’s fair displays and the fashioning of aesthetic interiors have been highlighted. Much less is known on goods procurement, beyond large-scale plunder by Western travellers. Fragmentary evidence suggests that the trade of antiques and the sale of assets for the benefit of pious foundations equally took place. The presentation will discuss the commodification of artefacts in late Ottoman Cairo and Damascus, and the range of agencies involved, within this double perspective.