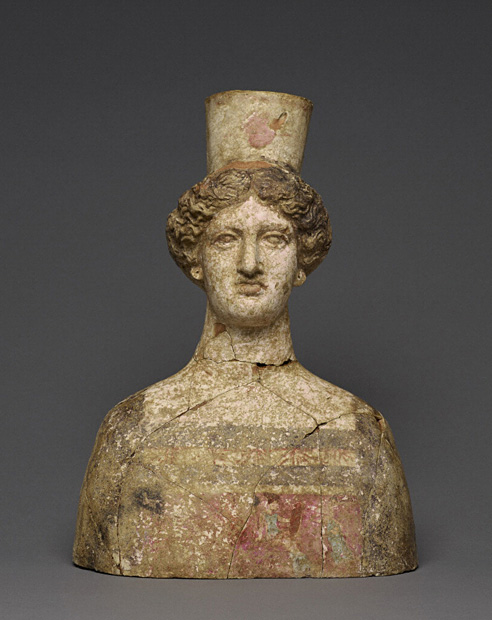 The Sanctuaries of Demeter and Persephone at Morgantina

A cache of over 30 votive offerings excavated from the sanctuaries of the ancient city of Morgantina is on loan from the Museo Archeologico Regionale of Aidone, Sicily. These objects, which date from 400 to 200 B.C., were given as gifts by worshippers to Demeter and her daughter Persephone, goddesses of agricultural fertility who also presided over the feminine sphere. Ranging from brightly painted (and originally bejeweled) terracotta figures of the deities (at right) to personal ornaments such as bone hair pins and oil lamps used in nocturnal rituals, the artifacts reveal religious practices and highlight the vibrancy of local craftsmanship. The loans are showcased in a special installation in Gods and Goddesses (Gallery 104) at the Getty Villa.

Situated in the fertile hills of central Sicily, Morgantina has been under excavation by American and Italian archaeologists since 1955, bringing to light its sanctuaries, theater, public baths, market, and houses. As the site of a native Sikel village in the prehistoric period and a later Greek settlement from around 550 B.C., Morgantina attests to the integration between indigenous and colonial communities. Under Greek influence, the local religion centered on the cult of Demeter and Persephone (also known as Kore). Persephone’s abduction by Hades (god of the Underworld) and their subsequent union provided the ancients with a divine explanation for the changing of the seasons. This myth was believed to have taken place in Sicily at Lake Pergusa, not far from Morgantina.