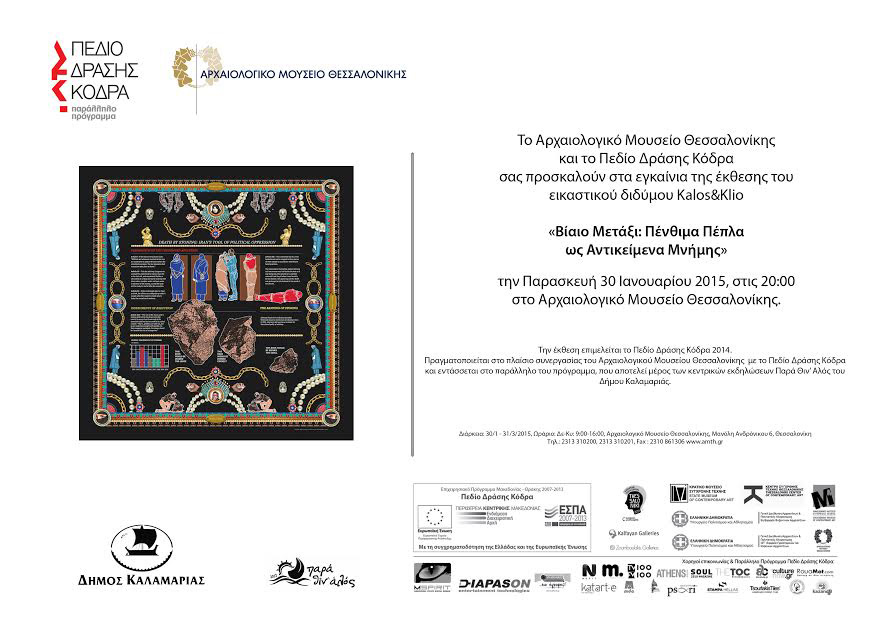 An exhibition entitled “Violent Silk: Mourning Veils as Objects of Memory” by the artist duo Kalos&Klio opens on January 30, 2015, in the Archaeological Museum of Thessaloniki. It is presented in this year’ s Parallel Program by Action Field Kodra 2014 titled “I NEED A HERO-Valuable Matters in Valuable Times” (Main Curators: Dimitris Mihalaros, Anthi Argyriou, Panagis Koutsokostas) a contemporary art festival organized in the context of Para Thin’ Alos of Municipality of Kalamaria, in collaboration with the Archaeological Museum of Thessaloniki. The exhibition is curated by Panagis Koutsokostas.

The title Violent Silk follows the controversial manufacturing production of silk, a traditional process that exports silk of the higher quality by boiling and killing the silkworm. To comment on this violent method and explore its connotations, the exhibition showcases a series of twelve artworks printed on silk fabric and presented as mourning veils form a symbolical “worn world”, as a reference to cultural memory and identity and includes also an archive of texts and images which describes twelve different examples of violence on a global scale.

As the artists Kalos&Klio said: “Each silk mourning veil converses to a single theme of violence, it unveils and raises questions on the aestheticization of violence in our consumer society, it questions the stereotypes that exist for this object in the western world and it addresses the phenomenon of violence in both institutional frameworks and informal justice structures. Violence is often manifested as massive retaliatory behaviour based on deep rooted culture norms, traditional practices, value systems and social institutions worldwide. Violent phenomena of cruel public punishment such as the still enforced death penalty, the barbarous death by stoning, human trafficking and the massive exploitation of people in China’s factories along with the unequal distribution of wealth that created the infamous Greek-European Dept Crisis are some of the violent phenomena the works discuss. […]”

“The way of the composition of those silk veils, which refer to both ancient and contemporary veils, provokes with the violence of its strong and often paradox compositions and the seemingly unconnected internet information. The works become thus polysemous and it is worth exhibiting them in our Museum, a place where prismatic views, ambiguity, calling dogmatic opinions into question and proposals for redemption of injustice and violence in human life, find sanctuary through the multileveled interpretations of the antique artifacts. […]” said archaeologist and director of the Archaeological Museum of Thessaloniki Polyxeni Adam-Veleni.