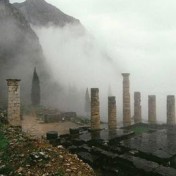 An enormous task of cosmological dimensions has been proved the site conservation project for the Oracle of Delphi, in Boeotia, Greece.

According to recent geological examinations, Pythia s’ tripod, as well as the whole main oracle, were standing in a crossroads of two large geological rifts, resulting to an awe inspiring experience for the ancients and loads of trouble for us. For 15 years, the sacred spring of Castalia remains closed while visiting the whole archaeological site – from the Athena Pronaea Sanctuary to the Stadium and from Castalia to the Museum – remains a distant dream. Frequent rock-falls from the famous Phaedriades overlooking the site are a constant danger for visitors, who are now able to visit only the Temple of Apollo.

However, there is hope that the Delphi Site will be restored as one through the large conservation project recently announced and set to finish in due course. The project also includes the restitution of the Tripod dedicated to the Oracle by the Pan-hellenes (all Greeks) after their victory over the Persians in Plateai.