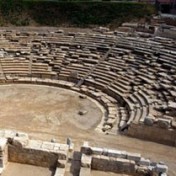 Two and a half thousand names found carved along the marbles of the ancient theater of Larisa are getting on an official corpus. The names, characterizing prominent citizens of Larissa and other Thessalian city-states, members of “Thessaloi Koeno” (Union of Thessaly’s city-states), are just a small element in a new epigraphy project taking place in the city, courtesy of the Central Archaeology Council (KAS) and French researchers. The project also includes the restoration of 8.500 inscribed fragments found in the theater area and now in storage.