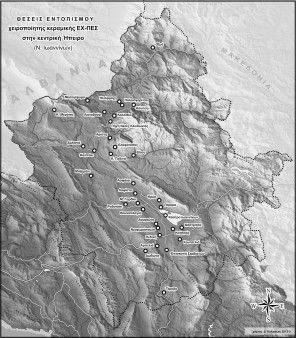 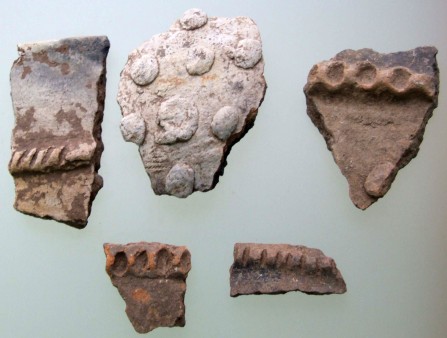 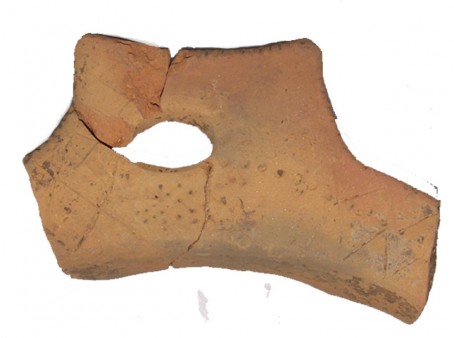 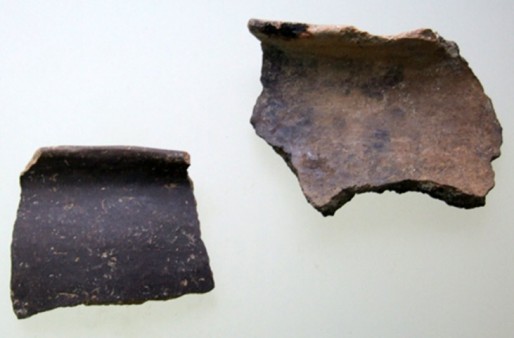 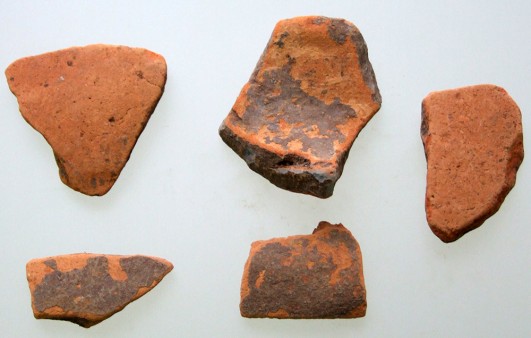 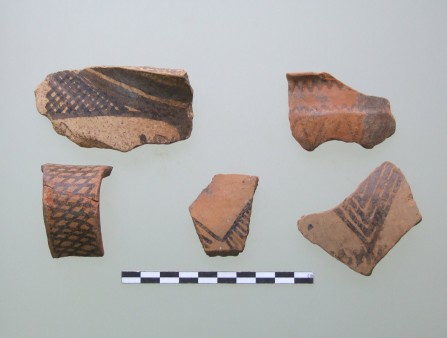 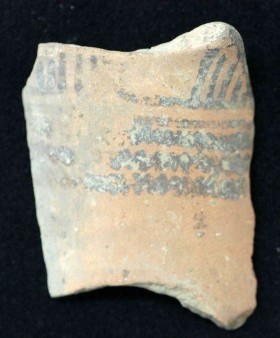 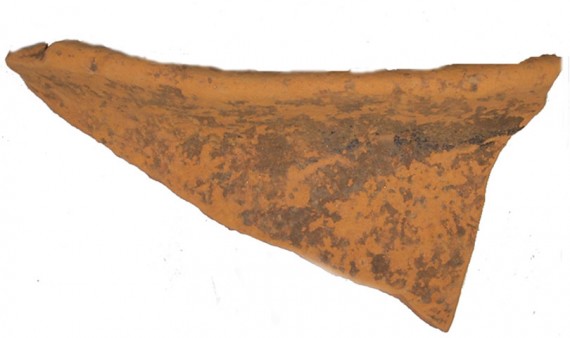 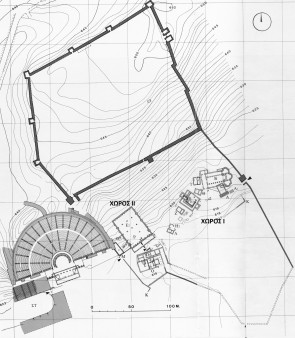 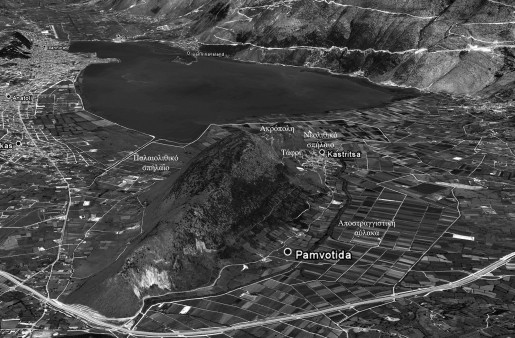 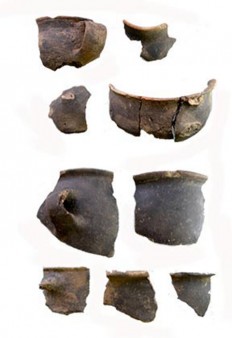 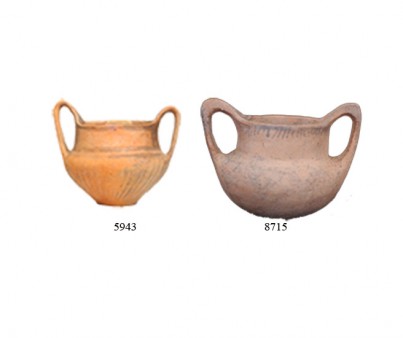 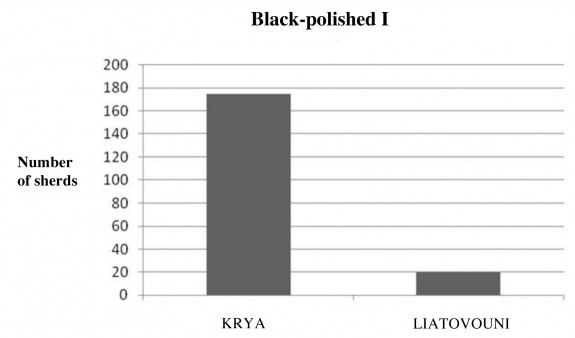 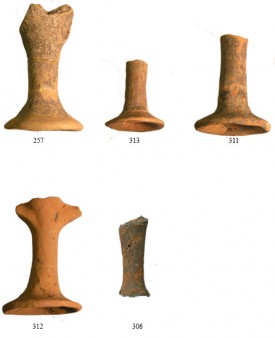 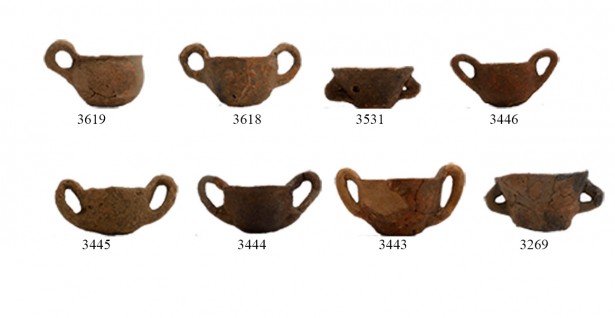 NOTES
1. The sites of Vitsa, Dodoni, Episcopi Servianon, Kastritsa, Kastro Ioanninon, Krya, Liatovouni, Palampouti have the features of a habitation, while Elafotopos, Kalpaki, Kato Konitsa, Kato Pedina, Mazaraki, Neochoropoulo have a funerary character. In two of these sites, Kastritsa and Elafotopos, the material relates to both contexts.
2. The typology was based on the selection and recording of the database from 837 diagnostic shards. These are individual shards or ones originating from the same vase, as well as complete vessels. Specifically, 344 shards were recorded from Krya, 448 from Liatovouni and 45 from other sites in Central Epirus (Dodoni, Elafotopos, Episcopi, Kastritsa, Koutselio, Lapsista, Mazaraki, Oxya Konitsas and Pedini , see fig. 1). Variants used for classification, according to types, is the form of the mouth, the outline of the vessel’s body and the arrangement of the handles. Next, based on the above variants, the rest of each type’s properties is outlined, combined with the size, surface treatment, ceramic material, firing and construction details in general.
3. See details in Yiouni P. 2015 ‘’Petrographic analysis of the hand-made Late Bronze Age-Early Iron Age pottery from the settlements of Liatovouni and Krya, in Epirus’’ Appendix I of the thesis.
4. The sites of Krya (Andreou 1988, 604; Andreou 1994, 239-240; Douzougli and Zachos 1994, 12-14; Zachos 1995, 252-253; 1997, 153-166;, Vasileiou 2011, 267-277) and Liatovouni (Douzougli 1994; Douzougli 1996; Douzougli and Papadopoulos 2011) are the ones with the least problematic stratigraphic sequence.
5. It is identical to handmade polished ceramics as named by older scholars. Handmade polished ceramics were located in a geographically extensive area (from Italy to the Eastern Mediterranean), but lasted only for a short period (LE/LMIIIB2-LEIIIC-Late). Their particular technology (handmade, brown black colour and polished surfaces) combined with their presence in layers of the Late Helladic IIIB2-IIIC led to the development of an entire literature around their origins and whether they appear in all regions as one category with uniform features.
6. Andreou (1994, 235) mentions the discovery of remains of a Late Bronze Age ceramic kiln, in the region of Glava in Kato Meropi, Pogoni.
7. The presence of both ceramic categories in most known sites (except for the graves in Neochoropoulo, Elafotopos, Mazaraki), combined with the fact that, macroscopically, the two categories do not show marked differences in the clay’s composition, led some scholars to regard them as one category (Wardle 1977, 181; Tartaron 2004, 79-81; Papaioannou 2004, 97-98).Wardle, in particular, argued that there was no real chronological difference between them. He considered that, to the naked eye at least, their clay substance was identical. The two categories differed mainly as to their range of shapes, since vases for the preparation and consumption of food were dominant in ceramics with plastic decoration, whereas vessels for drinking dominated in monochrome ceramics. In this respect, one group complemented the other, creating a complete ‘’ set’’ for domestic use. On the other hand, Dakaris (1951, 1952) and those scholars supporting the classification of ceramics (Hammond 1967• Vokotopoulou 1986), based their argument favouring the existence of two different categories, on the chronological gap between their appearance.
8. The fact that no Bronze Age architectural remains came to light in the eastern part of the Dodoni Sanctuary, further strengthens the view that perhaps some outdoor sanctuary functioned in the area. Holed stone pick axes were also linked to the practice of worship in the region, as well as a large number of pear shaped “votes” resembling those from Orchomenos in Boeotia (Fappas 2010, 713-719). Meanwhile, from the same region comes an assemblage of miniature copper objects (small knives, spear heads and tiny axes with occasional engraved and punctured decoration) which seem to imitate actual full size weapons of the period. Specifically, regarding the assemblage of copper cross axes (Kleitsas 2013, 116), their narrowness combined with their decoration enhances their votive nature. Similar types of object (miniature vases and copper weapons) were not found in the west part of the sanctuary.
BIBLIOGRAPHY
MOST POPULAR
RELATED