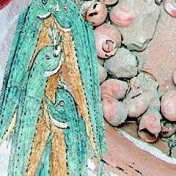 A Volcano of Tastes: food from prehistoric Thera

Fava beans, lentils, peas and beans as well as seafood, snails, fish and goat meat. This is what the inhabitants of Acrotiri, the 3.600-year-old-city buried under volcanic ash in Thera, Greece, were eating. Evidence comes not only from wall paintings and artefacts relevant to cooking and eating found in the ancient site but also by goods themselves, which were preserved under volcanic ash to come as a whole till our time.

This is what was explained by the archaeologist Christos Doumas in a recent lecture which was – surprise, surprise – accompanied by relevant dishes! The unusual “gourmet” lecture, which took place in the Megaron of Music, Athens, is, nevertheless, one of the most interesting examples of experimental archaeology targeting the wider public.