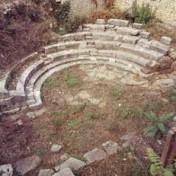 The disappearance of … half a stele

The upper part of a funerary stele formerly in the ancient necropolis of Ambracia – famous for its ancient theatre (pictured)  – was declared missing a month ago by the police authorities in Arta, Greece. The stele, surviving in fragments, had been revealed in the Western Cemetery of Ambracia in early January and, once photographed, it remained in situ till its transfer to the Arta Archaeological Museum storehouse.
The missing part was decorated in plant motifs in parallel registers, while the name of the deceased was inscribed in two registers.
Investigation is under the authority of Arta Security Office while the Head of the 36th Ephorate of Prehistoric and Classical Antiquities is also in charge.