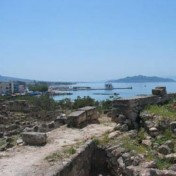 A modern port on an ancient one in Aegina, Greece.

The decision of the Central Archaeological Council of Greece to agree on the construction of a jetty at the Aegina Port has made furious archaeologists and friends of cultural heritage alike. The jetty is set to be constructed where a part of the ancient port existed – and still survives – while the works will be visible by the nearby Kolona archaeological site. The jetty’s construction seems inevitable as the Aegina Port, the second one in ships’ traffic in Greece, faces serious problems by waves and winds which threaten the safety of ships and passengers. However, certain alterations could have made to the initial plans so that both “present” and “past” to be safe.

Source: To Vima via Aρχαιολογ?α Online