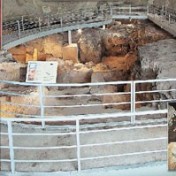 Thessaly, a European Cradle of Civilization

Thessaly was the cradle of civilization on Europe.  According to Prof. Stella Galanopoulou-Sendouka and Ms. Eleni Koniotsiotou, researchers specialized in agriculture and the emergence of civilization in Thessaly, the above statement is evident from the vast amount of finds in the area: Paleolithic tools from Rhodia (Larissa), Mesolithic objects from Plastira Lake and Peneios River, and a continuous prehistoric presence in Theopetra Cave. Seeds of wheat and barley have   been found in Argissa and Sesklo, two of the first settlements in Europe, indicating the high sophistication among the Thessalians during Prehistory.