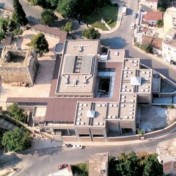 LEWISBURG, Pa. – Two Bucknell University professors have been selected to lead the first joint Greek-American archaeological dig in the ancient city of Thebes, Greece – the first such excavation of the historic Ismenion Hill area in nearly a century.

Bucknell classics professors Stephanie Larson and Kevin Daly, together with Vassilis Aravantinos, ephor of prehistoric and classical antiquities for the Greek region of Boiotia and director of the Thebes Archaeological Museum, received approval from the Central Archaeological Council of the Greek Ministry of Culture on March 29 to launch a comprehensive geophysical survey and excavation at the Ismenion Hill and surrounding areas.

"This is a great moment that could usher in a new era of exploration and understanding into the archaeology and cultural history of this important ancient Greek city-state," Larson said. "And it is only through Dr. Aravantinos' stewardship, the cooperation of the Greek government and sponsorship from the Stavros Niarchos Foundation that we are able to do this."

Stavros Niarchos Foundation grant
The joint project, or "synergasia," has received major funding through a three-year, $350,000 grant from the Stavros Niarchos Foundation, one of the world's leading international philanthropic organizations. Additional funding includes contributions from The Gladys Delmas Foundation, the Loeb Library Foundation and Bucknell University. Larson and Daly currently are seeking contributions to continue the project well beyond 2013.

"The importance of the Ismenion hill as a site for exploration cannot be overestimated," Daly added. "Ancient sources from a wide range of chronological periods attest to the Ismenion's continued use as one of the main sanctuaries of ancient Thebes. Without question, the site is of monumental architectural, literary and cultic interest for periods from the second millennium BCE onward."