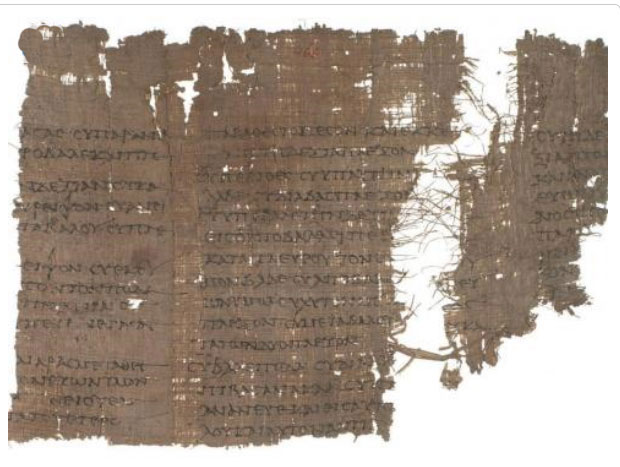 Whether he was at a youth tournament, the NCAA finals or the Olympics, the late wrestling public address announcer Ed Aliverti used to greet fans in every arena the same way.

“Welcome to the world’s oldest and greatest sport,” said Aliverti, who died in 2010.

The “greatest” part of that is a matter of taste. But when it comes to “oldest,” the sport of wrestling now is showcasing some ancient documentation to make its case.

Written in Greek on an 18-inch wide fragment of papyrus and dated to between 100 and 200 A.D., it is a list of instructions on how to wrestle.

“It’s such a historical find. It’s the oldest written instruction on any sport know to man to date,” says Lee Roy Smith, executive director of the National Wrestling Hall of Fame in Stillwater, Okla.

In a presentation Tuesday at Columbia University in New York, a replica of the artifact was presented to the Hall of Fame.

According to the Hall of Fame, the document was found in the late 1800s in Egypt by a couple of graduate students from Oxford University in England. It was found in a region southwest of Cairo that had been favored by Greek colonists.

In 1907, the artifact was among fragments of papyrus shipped to Columbia , which at that time was among the schools pioneering college wrestling in the USA.

In September of this year, Hall of Fame wrestling historian Don Sayenga published a report on the artifact.

Well, there certainly are no instructional texts dating to 100-200 A.D. on how to putt a golf ball or hit a baseball. And the language of the artifact, translated from Greek, does contain the stuff of wrestling instruction.

The Greek word “pleckson” is seen throughout the text. According to a translation published in 1987 by Yale University Press, that word translates to “fight it out.”

Here of some of the translated instructions:

•”Stand to the side of your opponent and with your right arm take a headlock and fight it out.”

•”You underhook with your right arm. You wrap your arm around his, where he has taken the underhook, and attack the side with your left foot. You push away with your left hand. You force the hold and fight it out.”

•”You stand up to his side, attack with your foot and fight it out.”

Not unlike some of the stuff wrestlers will be doing when they fight it out for medals at next summer’s Olympics in London.

Smith, a 1980 NCAA champion, 1983 world silver medalist and former coach at Arizona State, can relate to the instructions.

“Here we are today. We’re passionate about wrestling, and we see this manual and coaches and wrestlers were doing the same thing (in ancient times),” says Smith.

Says wrestling icon Dan Gable: “I like it when the sports of wrestling gets pointed out from a historical point of view.