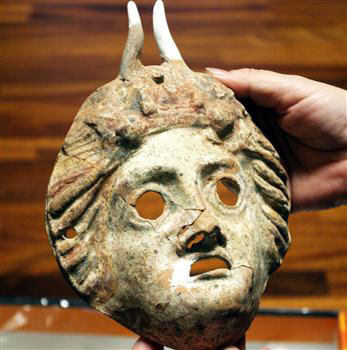 Two masks found in a grave during excavations in the central Anatolian province of Eskişehir’s Şarhöyük-Dorylaion Necropolis site are expected to shed light on ancient culture. The masks date back to 1 A.D.

Anadolu University Archaeology Department Professor Taciser Sivas said the masks were regarded as the most beautiful historical findings of the year. Excavations in the necropolis had been continuing since 2005, she said. “The masks were broken, but we have repaired the broken pieces. There are horns of a mythical figure on one of the masks, symbolizing a satyr [a half-human and half-goat god]. The other is bigger and white, with black and red hair.”

Sivas said the masks had been worn to symbolize abundance and plentitude at wine-harvest ceremonies in ancient times. They were still being produced through the end of the Roman period.

“Masks were used during religious ceremonies. It is very significant the masks were found in Şarhöyük as Eskişehir became the capital of Turkish world culture.”

The masks will be displayed at the Eskişehir Eti Archaeology Museum.