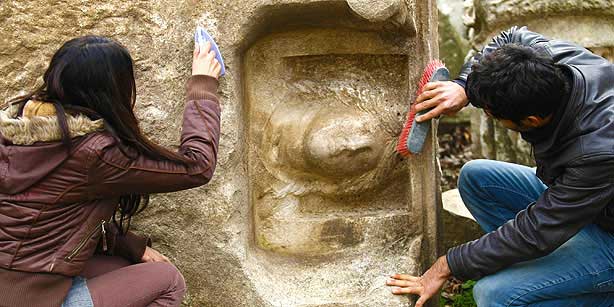 A 2,000-year-old relief bust of a king was discovered during excavations in ancient Stratonikeia in Muğla’s Yatağan district.

Dr. Bilal Söğüt, a professor of archeology at Pamukkale University and head of the excavations, told the Anatolia news agency that they found a street in the ancient city which began with a gate and was lined with columns. During their excavations, they also discovered the bust of a king dating back to the Hellenistic period. The bust, which is one-and-a-half meters tall and nearly two meters wide, features depictions of bull heads and the figure of a goddess, Söğüt said.

“The depictions of bull heads on the bust represent wealth and power. It was in this region that we previously found a racing chariot. The discovery of 1,500-year-old mosaics here was another welcome breakthrough for us,” he said.

Söğüt said he thinks the walls surrounding the ancient city are nearly 3,600 meters long. “We discovered that one 400-meter section of wall has been preserved to this day. After completing restoration, we will open the wall to visitors,” Söğüt said.

A 100-person team of academics, field workers and students discovered 460 artifacts in the ancient city in the seven-month-long excavations that took place last year, according to Söğüt. The artifacts were delivered to the Muğla Museum. The pieces date back to the Roman and Byzantine periods, he said.