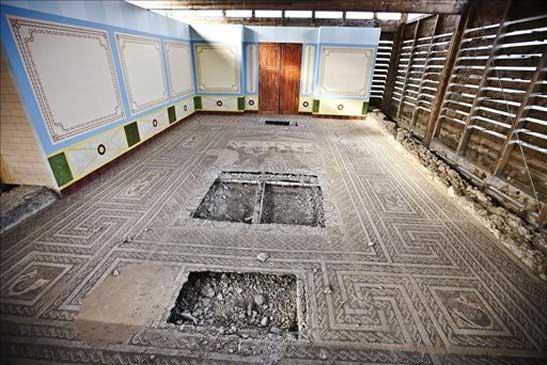 Three large sections have been chiselled out and stolen

A priceless IV Century Roman mosaic in Baños de Valderados, Burgos, has been irreparably damaged by thieves, who ripped out three separate sections, including one measuring almost 2.5 square metres, in a theft which was discovered on Wednesday.

The 66 square metre mosaic was only discovered in 1972 and depicts the Roman god Bacchus and was one of the best preserved Roman mosaics of the Iberian Peninsula. The local Mayor, Lorenzo Izcara, told El País that the thieves caused havoc and tremendous damage when they ‘barbarously’ chipped out the stolen sections, ‘probably with a chisel’.

The remains of the Roman villa where the mosaic lies is some 300 metres outside the village with no security on site in winter. Visitors who wish to enter must use a telephone at the site to call for someone to let them in, and it was two tourists from Cataluña who arrived for a visit there on Wednesday morning who noticed the break-in.

The lock had only been recently changed after a previous break-in in November, when a very small area of the mosaic was damaged. The Mayor said he warned the regional government then that security would have to be stepped up. He added that he was told by the expert who restored the damage on that occasion that it would be very difficult to steal the mosaic as it was laid on reinforced concrete.