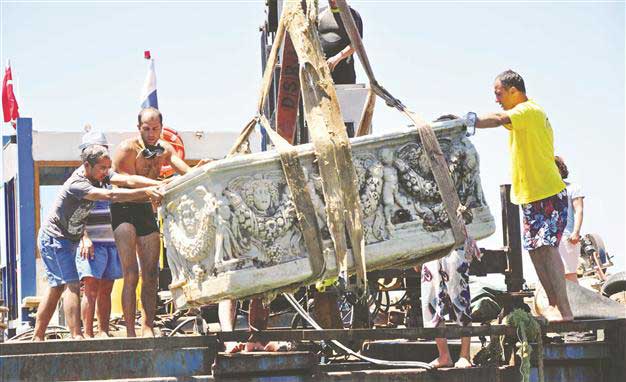 Perhaphs it was made in the sculpture school at Aphrodisias

Diving school trainer Hakan Gulec came across more than fish and flotsam during a recent trip to the bottom of the ocean near Antalya off the coast of southern Turkey. An object protruding through the sand on the sea bed caught Gulec’s attention, prompting the intrepid explorer to dislodge and photograph the mystery find. According to Hürriyet Daily News, he then showed his images to officials at Alanya museum who were taken aback by the discovery: a striking, well-preserved sarcophagus adorned with Medusa heads, cupids holding up garlands and dancing women at the corners.”The Alanya museum has gained a new piece of art,” said its director Yasar Yildiz. “The figures on it show that it dates from the Roman period.” But where has it come from? Perhaps it was made in the famous sculpture school at Aphrodisias further up the coast, which produced sculptural works for the Roman empire.