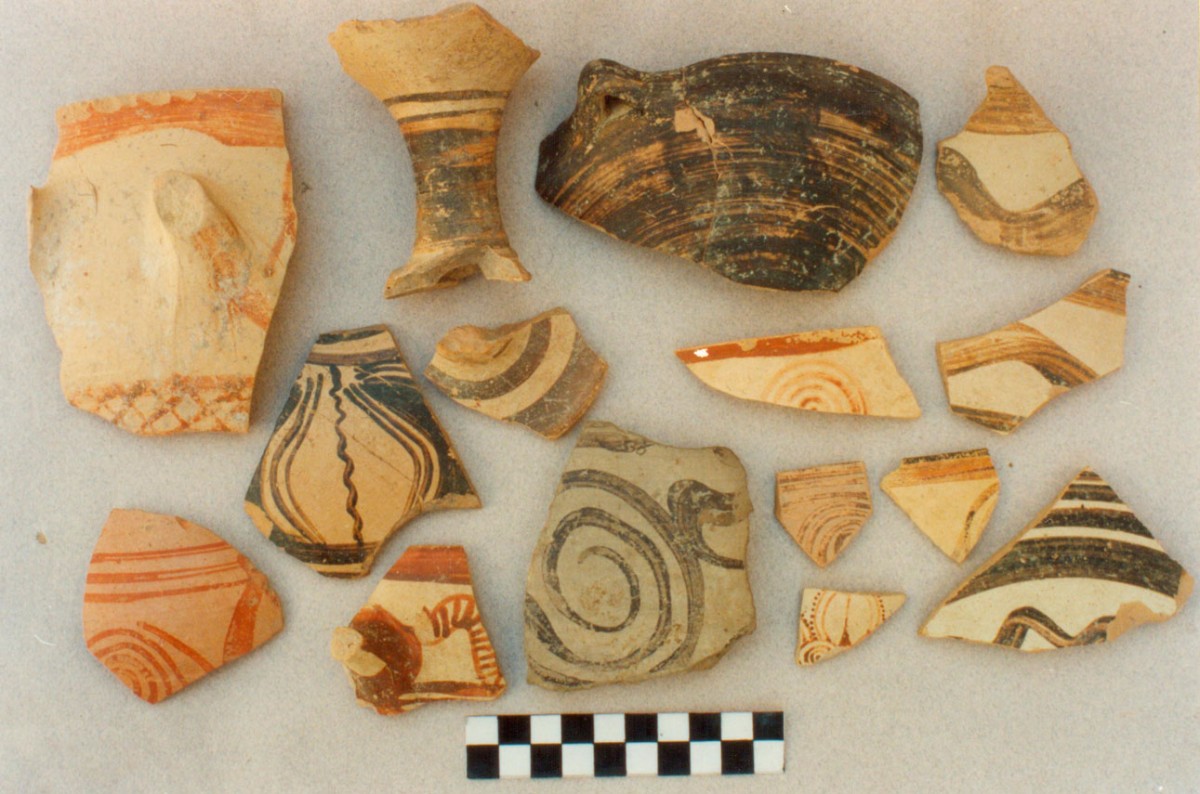 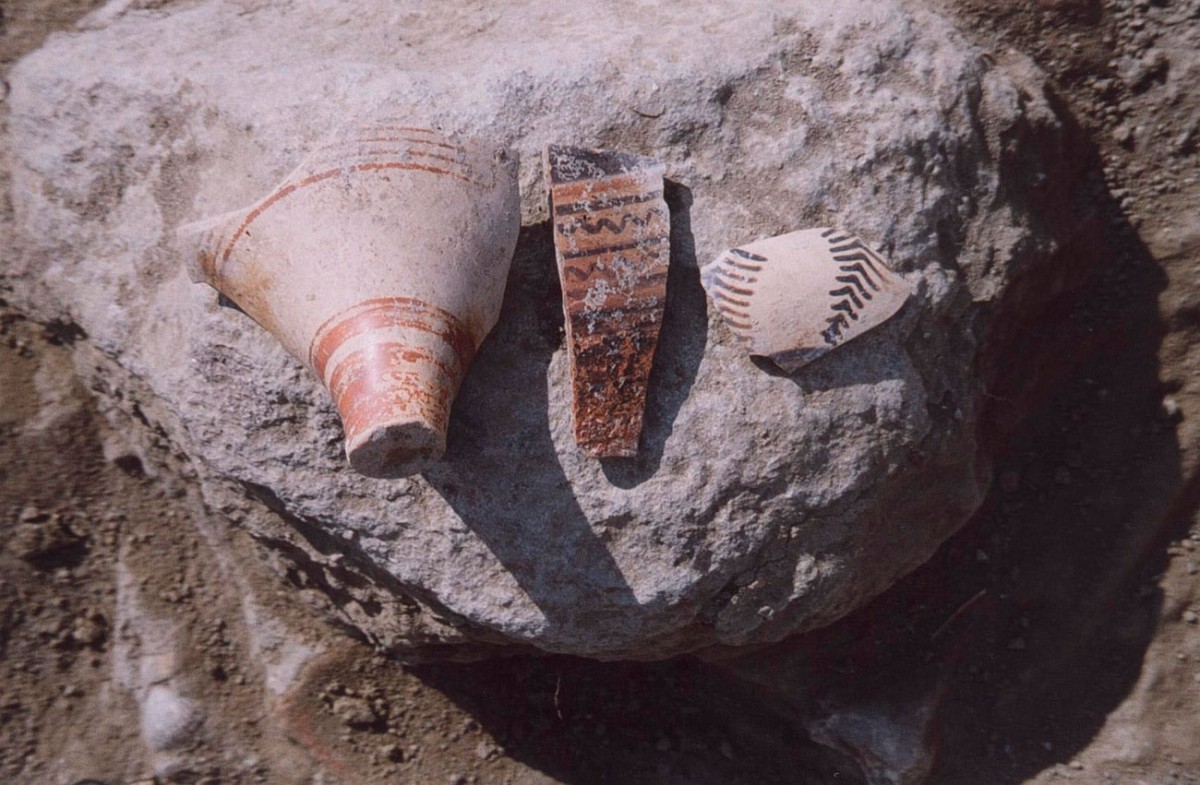 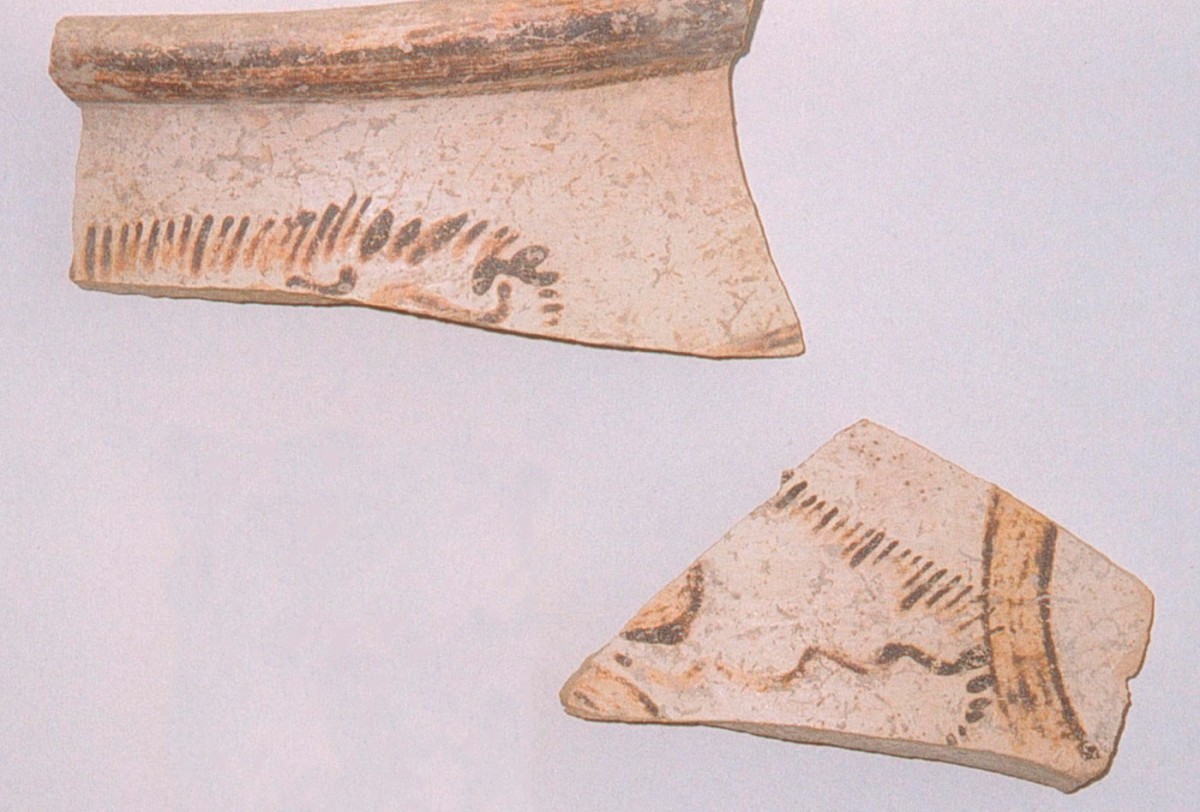 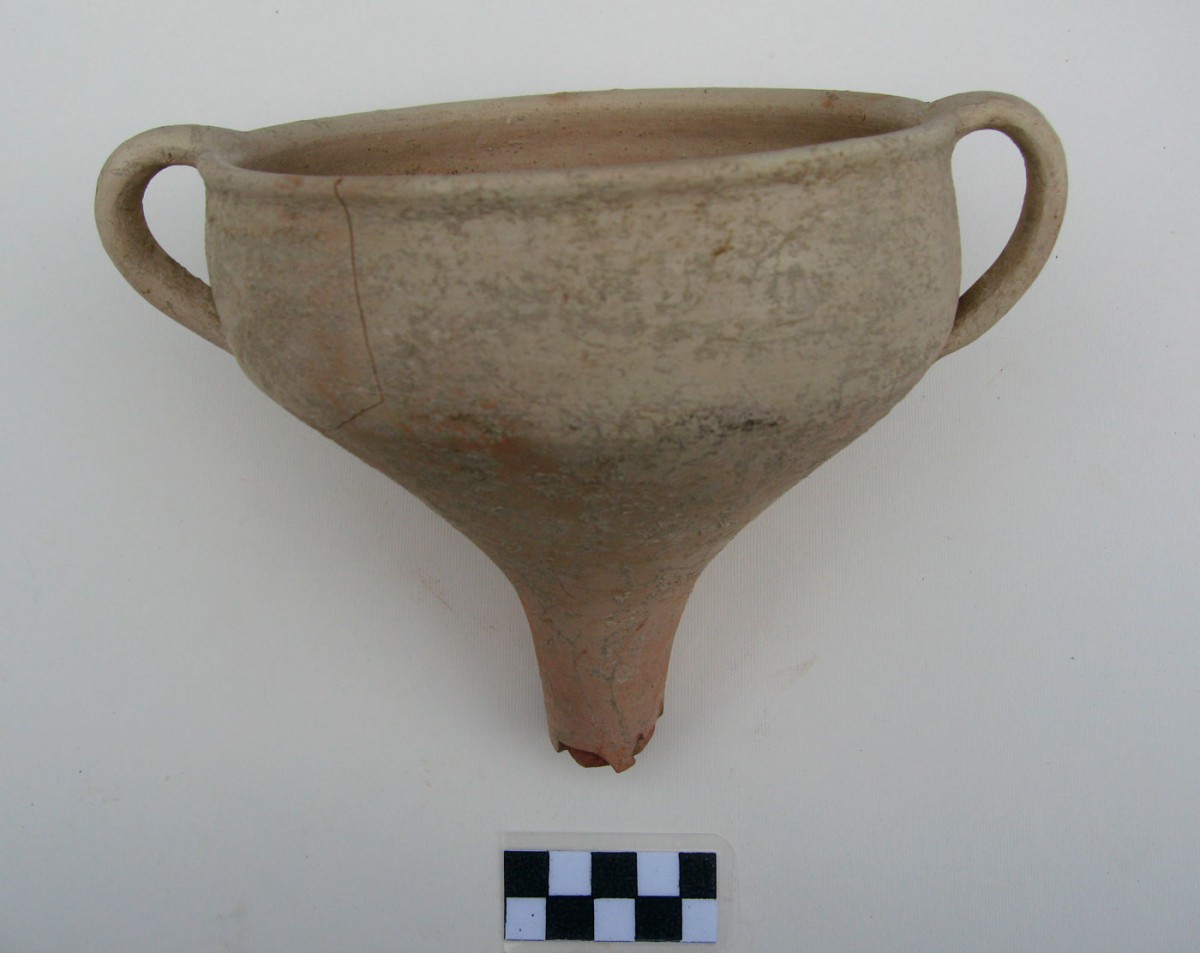 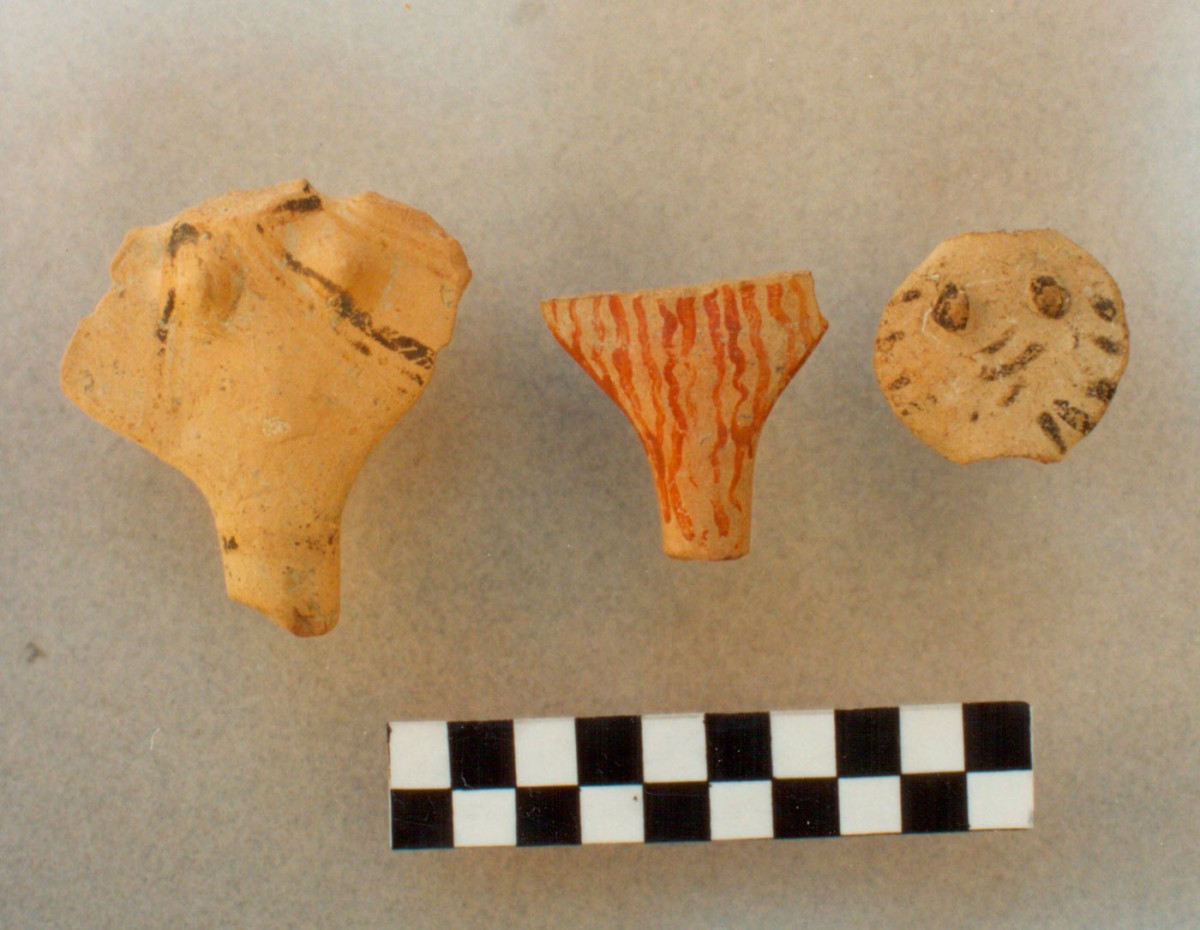 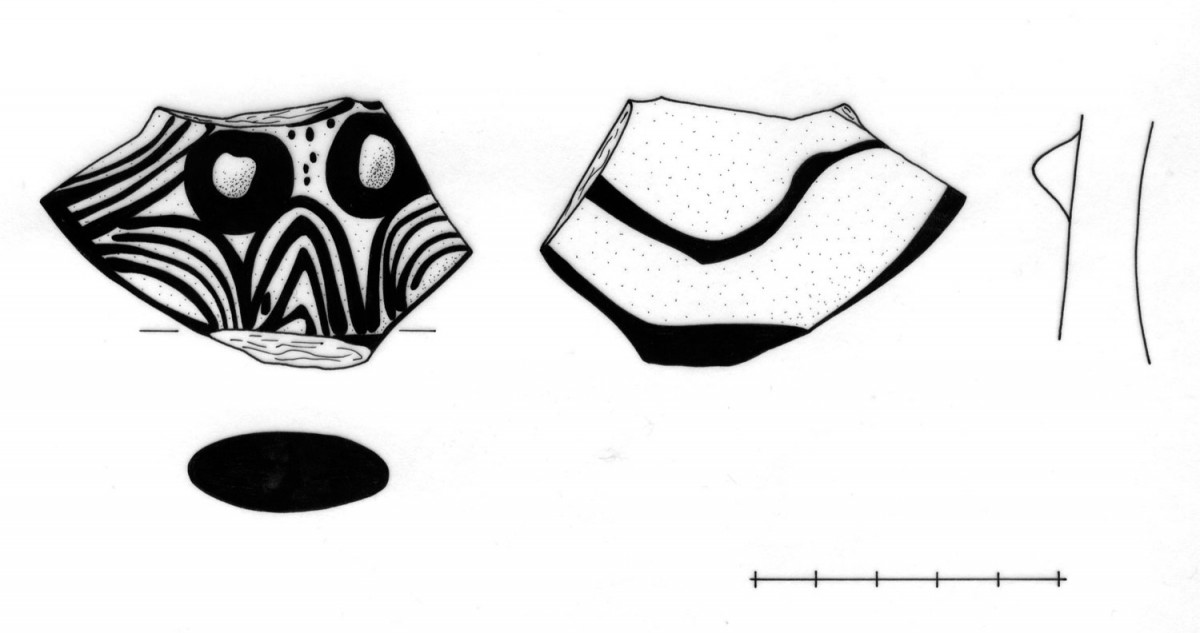 Mycenaean pottery collected during sporadic surface surveys all over the Koukonisi islet, ever since the first stages of research on it (note 1), led the director of the excavations (i.e. Dr. Chr. Boulotis) to argue that: “the Mycenaeans could not have ignored the advantages offered by Lemnos; given the crucial geo-political significance of the island for navigation within the wider area, the consequent control and penetration to Hellespont, they would have established trading and/or operational bases on Koukonisi, in Hephaestia, in Poliochni and, probably, in other sites” (note 2). On Koukonisi, in particular, the presence of numerous terracotta zoomorphic and, especially, anthropomorphic Mycenaean figurines, of the characteristic Phi and Psi types, would “testify to the existence of a, more or less, permanent installation” (note 3).

So far, Mycenaean pottery appears to be denser in the southern half of the islet, indicative, in all probability, of a habitation nucleus there, as well as in the west of the excavated area, where anthropomorphic figurines have already been collected. Nevertheless, Mycenaean stray finds, such as pottery sherds and parts of zoomorphic terracotta figurines, have been spotted even on the ground and the surface layer of the excavated area itself.

During 2005 excavation campaign, Mycenaean pottery came to light in three different areas of the site. In the Trench 6A, a hoard of sherds and broken vases were found just below the surface layer. The finds, unconnected to architectural remains, were rejected there, as it seems, during a later phase of the Late Bronze Age, since they have been laid on an earlier floor, dated to its beginning. In their vast majority, they belong to open, drinking vessels, especially kylikes (decorated or plain), deep bowls, cups, and kraters. From the closed vessels, on the other hand, large stirrup jars are the commonest shape, ideal for storage and commercial transportation of liquids, such as wine and oil. An incised, with linear motif, clay stopper, for the spout of a stirrup jar, indicates that some vessels of this kind probably ended up in Koukonisi via the commercial network. Possible, though limited enough, is the presence of vessels of the type of jug, amphora and hydria. Although quite preliminary, this pottery group has been dated from LH IIIA2 to LH IIIB1, i.e. from the middle of 14th to the beginning of 13th cent. BC.

To a slightly earlier chronological horizon belong some Mycenaean sherds, which came to light in Trench 9, in the spacious, elongated Room I, dated to the beginning of the Late Bronze Age. These sherds, evidently rejected there at a later phase, support the assumption that even in the highest plateau of the islet (Koukonos) there would have been Mycenaean architectural remains, which were destroyed by the continuous tillage and the consequent removal of architectural material by the inhabitants of the nearby modern village of Moudros. The remains of a long wall, detected in a slightly higher level, at the west edge of the excavated area, attest perhaps for contemporary (Mycenaean) buildings.

During 2005, also, numerous Mycenaean sherds came to light in a trial trench 5×5 m opened at a lower level, at the west of the prehistoric settlement (Sector Γ), where Mycenaean anthropomorphic figurines had been collected during past surveys. Unfortunately, although the digging reached a depth of 30-40 cm under the ground surface, no related architectural remains were revealed in this trench; the latter are expected, probably, at a lower level. A headless body of a quite large Mycenaean figurine (estimated height ca. 18-20 cm) found there, in addition to the collected pottery within the surface layer, stresses the significance of Sector Γ in the Mycenaean period of the islet.

The abundance of Mycenaean finds from Koukonisi, expected to proliferate by the forthcoming resumption of the excavation, sheds new light on the presence of Mycenaeans in the NE Aegean, Troy included. Scheduled petro-graphic analyses of the pottery are anticipated clarifying issues concerning its provenance, either it was imported from Mycenaean centres of the Mainland or it was produced in local workshops. In every case, indeed, we will be able to reach a better understanding of the historical setting and the expanding policy of the Mycenaeans in this key area for the trade network in the Late Bronze Age.