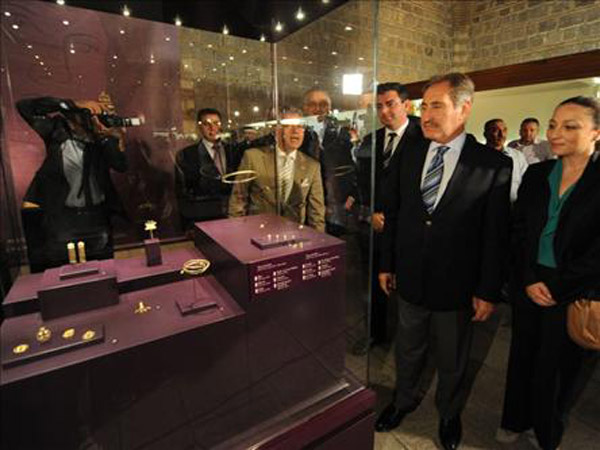 A Philadelphia archaeology museum will indefinitely loan ancient jewelry known as “Troy gold” to Turkey in an arrangement that will allow the museum to host a future exhibit of artifacts related to King Midas, officials announced Tuesday.

The deal is part of what Penn Museum officials called a landmark agreement with the Turkish Ministry of Culture and Tourism to work more collaboratively on field work and exhibitions over the next several years.

“It will lead to great opportunities — for Penn, for Philadelphia and for the wider archaeological community — to experience more of Turkey’s rich cultural history and heritage in the future,” museum director Julian Siggers said.

Ertugrul Gunay, the Turkish culture and tourism minister, said the 24 pieces of jewelry are among thousands of historical artifacts returned to the country over the past two decades, according to the state-run Anadolu news agency.

The University of Pennsylvania Museum of Archaeology and Anthropology acquired the early Bronze Age objects in 1966 from a now-defunct art dealership. But the origin of the items — including earrings, pendants and pins — was unclear.

The purchase eventually led museum officials in 1970 to adopt a then-unusual policy of refusing to acquire artifacts of unknown provenance that might have been looted.

Siggers said the jewelry remained in storage for years. Then in 2009, scholars found a grain of dirt on one piece that allowed them to identify the collection as most likely being from the historic city of Troy. Discussions for the objects’ return began with Turkish officials last year.

Brian Rose, an archaeology professor who co-directs the museum’s excavations at Troy and Gordion in Turkey, said the jewelry is on indefinite loan because the Troy provenance is likely, but not certain.

The pieces are expected to be displayed at a new archaeological museum being built in Troy that will open within two years, according to the Anadolu Agency. Troy is in northwest Turkey near the city of Canakkale, about 150 miles from Istanbul.

In 2016, the Penn institution will host an exhibition of treasures excavated from what is believed to be the tomb of King Midas’ father. It also will include “an incredibly impressive funerary assemblage” of objects from other sites, which Rose said will offer an overview of ancient aristocratic burial customs.

Midas ruled the kingdom of Phrygia, near present-day Gordion, in the mid-8th century B.C. A Penn archaeologist discovered the tomb in 1957, and the university has worked there for decades.

Many artifacts uncovered there have been displayed in the Turkish capital of Ankara, Rose said.