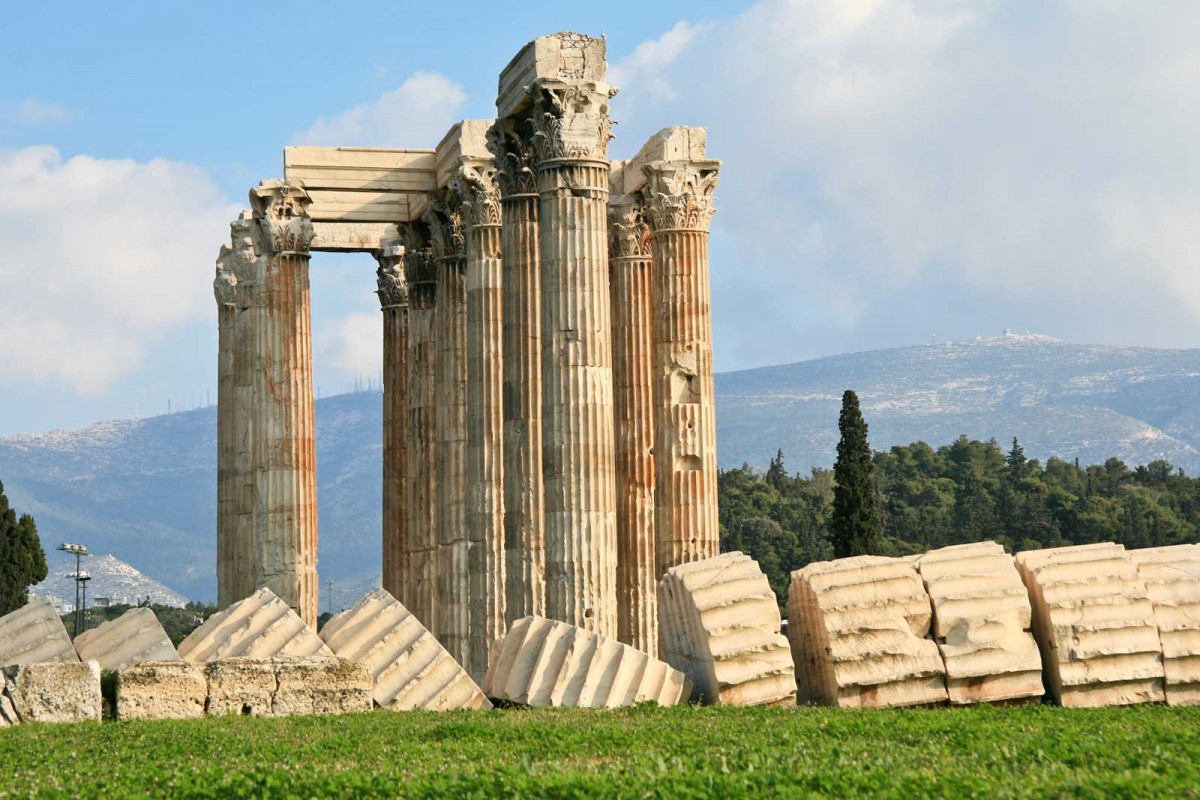 The great ruins of ancient Greek civilization are being imperiled by massive budget cuts Greece is imposing to qualify for European bailout funds after years of overspending, say preservation experts.

“Hadrian’s Arch and the Temple of Olympian Zeus are in danger of falling down,” said Despina Koutsoumba, head of the Association of Greek Archaeologists.

The carved stone statues and structures that are out in the open and important to the country’s tourism industry usually receive restoration work after every winter.

However, Hadrian’s Arch, a Roman triumphal gateway, and the Temple of Zeus, named for the greatest of the Greek gods, received no care this year because of budget cuts. They are among many examples of Greek culture that face possible erosion, Koutsoumba says.

The Ministry of Culture’s budget has been cut by 50% over the past two years, and deputy minister of culture Kostas Tzavaras says another 50% cut looms. But many here say that even if the cuts are a long time coming, they do not have to result in a reduction in care for Greece’s architectural treasures.

The Ministry of Culture has been renowned more for its spending sprees and ineptitude than its protection of monuments, analysts say.

Former Culture minister Pavlos Geroulanos said he would resign after robbers stole dozens of priceless artifacts in February from a museum. Some of the bronze and pottery pieces dated from the ninth century B.C. and were protected by a single guard at the Archaeological Museum of the history of the Ancient Olympic Games.

Still, the Culture Ministry says it has no choice but to pare back on things like paid security guards.

“I didn’t come like Santa Claus,” Tzavaras said. “I don’t have money to give away, like other ministers did.”

Greece’s growth has been negative for six consecutive years. Its debt levels total 165% of overall economic output, compared with 108% for Ireland.

The fourth round of austerity measures will be implemented this month by the Greek government under the auspices of the International Monetary Fund, the European Central Bank and the European Commission.

Tourism accounted for 15% of Greece’s economy in 2010 and employs about one-fifth of the country’s 4 million workers, well above the 2010 average for Europe. Many come here to relax on the Greek isles of the Aegean Sea, but most come to see the wonders of one of the greatest of all civilizations.

Thodoris Pelagidis, economics professor at the University of Piraeus, could not say if the spending on the Culture Ministry budget was too high.

“There are people that devote themselves to the antiquities and work day and night,” he says. “But, there are also the well-known inefficiencies.”

One reason the budget is being cut is because there are fewer things to protect, the government says. According to the Looting Department, antiquity and art theft has increased by 25% the past two years.

“War as well as financial crisis give individuals and organized groups the opportunity to [grab] cultural artifacts with higher chances of success,” said Christos Tsirogiannis, forensic archaeologist. “The financial crisis [in Greece] is forcing more people every day into illegal acts for easy money.”

But a rise in illegal excavations shows that the budget cuts are costing Greece money and treasure, say preservationists.

“You see people that have nothing to do with archaeology wanting to start digging up the earth,” Koutsoumba says. “We used to have guards on the lookout for possible illegal excavations that we don’t have any more. Only 500 seasonal guards were hired this year, while last year the number was 2,500.”

Analysts say that more than 80% of looted antiquities are smuggled abroad, where they command high prices, and the budget cuts are making it difficult to recover the pieces.

“It is impossible to trace the criminals who operate daily throughout Greece with only 38 policemen in Athens and Thessaloniki (devoted to this),” said Tsirogiannis, who has worked with the Greek police art squad.

“Greece needs more people to guard, protect and examine the phenomenon of looting, more experts, specifically educated and experienced archaeologists, policemen and scientists, to fight this kind of crime,” Tsirogiannis said. “This type of crime robs us of our past and therefore of our future.”

Read the answer to this article: