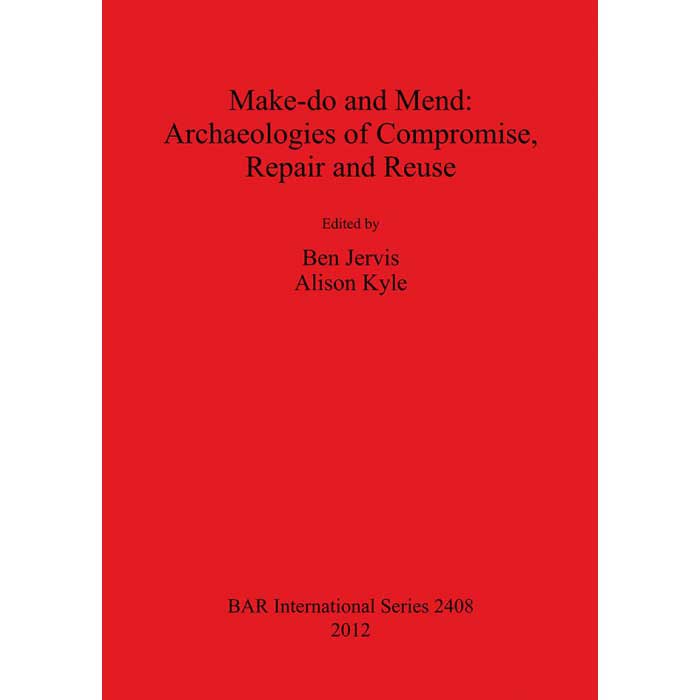 Ben Jervis and Alison Kyle (eds.), Make do and Mend

Archaeologies of Compromise, Repair and Reuse

This volume derives from a session held at the 2010 Theoretical Archaeology Group conference (Bristol University). The aims of this session were to explore occurrences of compromise (or making do) and repair (mending) in the past, with a particular focus on material culture. This original scope broadened to encompass reuse – inextricably linked to the central themes, particularly when considered through a biographical approach. Contents: Introduction: Archaeologies of Compromise, Repair and Reuse (Ben Jervis and Alison Kyle); 1) What did the apocrypha know? Glued pottery vessels from Springhead and other Romano-British sites in south and eastern England (Kayt Marter Brown and Rachael Seager Smith); 2) Modifying Material: Social biographies of Roman material culture (Lousia Campbell); 3) Reuse, Repair and Reconstruction. Functioning aqueducts in post-Roman Spain (Javier Martínez Jiménez); 4) A Hole for the Soul? Possible functions of post-firing perforations and lead plugs in early Anglo-Saxon cremation urns (Gareth Perry); 5) Riveting Biographies. The theoretical implications of early Anglo-Saxon brooch repair, customisation and use adaptation (Toby Martin); 6) Making-do or Making the World? Tempering choices in Anglo-Saxon pottery manufacture (Ben Jervis); 7) More Than Just a Quick Fix? Repair Holes on Early Medieval Souterrain Ware (Alison Kyle); 8) Beyond a ‘Make-do and Mend’ Mentality. Repair and reuse of objects from two medieval village sites in Buckinghamshire (Carole Wheeler); 9) When is a Pot Still a Pot? (Duncan H Brown); 10) Survival and Significance: Some Concluding Remarks on Reuse as an Aspect of Cultural Biography (Mark A Hall).