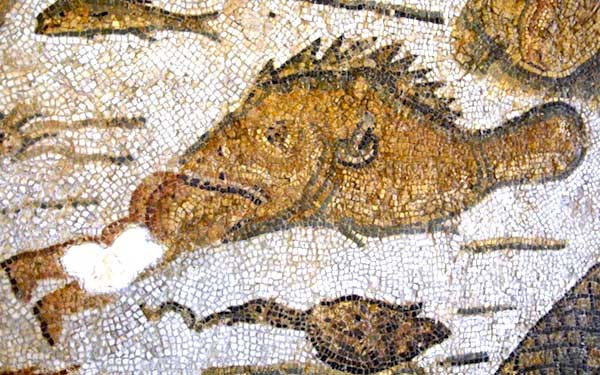 Unintentionally, art can become more than just a cultural record, but an environmental one as well. The distribution of animals in Paleolithic France can be analyzed through the Lascaux cave paintings, and an extinct animal can sometimes only be seen through an old rock carving, as is the case with the buffalo-like “Great bubalus” in Africa. This has been particularly true with mosaics, one of the best preserved types of ancient art, in which detailed depictions of animals both living and extinct can be examined for indications of how and where they lived.

The Mediterranean mosaic fish that caught the interest of University of Salento biologist Paolo Guidetti and Stanford University biologist Fiorenza Micheli was the dusky grouper, Scientific American reports. A massive fish, the dusky grouper can grow longer than four feet and weigh more than 100 pounds, with a large gaping jaw. However, it used to be even bigger, at least according to the mosaic that Guidetti came upon when perusing an ancient art book. In it, a dusky grouper swims among an array of earth-hued sea creatures, and from its wide mouth hangs the legs of a poor human it is in the process of consuming (see above).

Unfortunately, despite its hulking shape and formidable mouth, the grouper is a popular prey for its savory flesh, and it has been overfished and declared endangered by the International Union for Conservation of Nature. Few groupers even come near the surface now, decreasing their chances of taking on a man for a meal.

To get an idea of what the grouper’s profile used to be, Guidetti and Micheli investigated mosaics in museums and books, finding 73 scenes with fish or fishing, 23 of these with groupers, dating from the first to fifth centuries. In the Etruscan, Greek, and Roman mosaics, the groupers are as much monster as fish, spiked fins rising up from their monolithic bodies. While the one eating a person appeared to be an anomaly, possibly an artistic flourish, they were frequently shown to be of startling size.

The researchers’ discoveries were published last year in the “Frontiers in Ecology and the Environment” journal. Their examinations reveal a fish larger than any of those found today, as well as fishing techniques like harpooning and nets that indicate groupers once swam close to the surface. Of course, as all art is interpretive, no matter how representational, it can only offer hints. But the researchers are confident that there is something to be learned from non-scientific sources when directing the conservation efforts of a species.

As Micheli told Scientific American: “For these types of questions, we must be willing to consider the importance of less quantitative, more anecdotal evidence. We wanted to emphasize art as a form of information.”