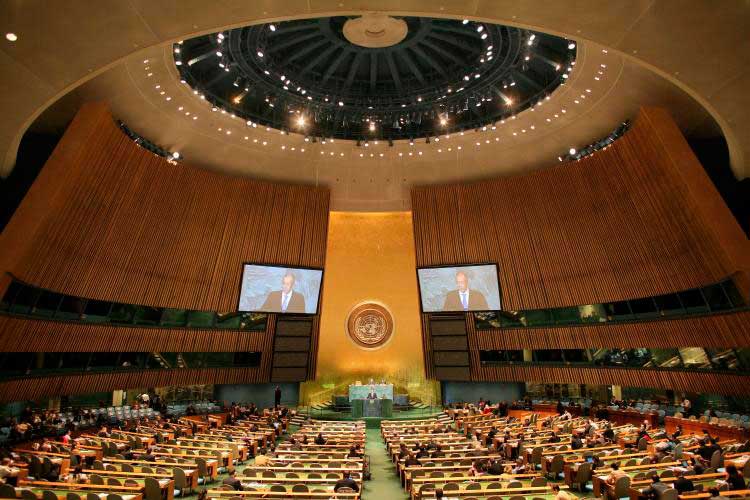 Approval of the resolution introduced by Greece

The General Assembly of the United Nations unanimously adopted the Resolution on the “Return or restitution of cultural property to the countries of origin”, introduced by Greece.

Permanent Representative of Greece to the United Nations Anastassis Mitsialis presented to the General Assembly of the UN the draft Resolution on the “Return or restitution of cultural property to the countries of origin.” The decision was co-sponsored by 98 state parties, and was adopted unanimously.

Mr. Mitsialis thanked the Secretary-General and the Director General of UNESCO for the tireless, constant and meaningful support they have provided on this issue. In his speech he referred to the important steps taken in recent years on the field of the return or restitution of cultural property to the countries of origin. In particular he mentioned the meeting of the state parties on the Convention on the Means of Prohibiting and Preventing the Illicit Import, Export and Transfer of Ownership of Cultural Property of 1970, which took place in June 2012 in Paris. In this meeting two important decisions were made: to convene a meeting every two years on this issue and to establish a subsidiary body for monitoring the implementation of the 1970 Convention.

Mr. Mitsialis referred to the great threat posed upon the cultural heritage of the nations by the illicit trade of cultural goods, in particular in times of crisis and in conflict areas, underlining that the Resolution draft condemns the recent attacks in sites of World Cultural Heritage and calls for the immediate termination of such actions. He also reminded the state parties of the Convention for the Protection of Cultural Property during armed conflicts and the obligations deriving from it.

Mr. Mitsialis also stressed the great importance of the fact that the international community has become increasingly sensitive to this issue and that actions have been taken to ensure the success of the efforts made in this field. He mentioned the systematic campaigns realized by UNESCO, in collaboration with INTERPOL, UNIDROIT and other organizations for the effective protection of cultural heritage, the measures taken to halt illegal excavations, the protection of property rights for archaeological objects which have not yet come to light. Finally, he pointed out that a collaboration with the international art market has been initiated aiming to improve the methods of particular importance in various fields of expertise, such as the origin, the research, the ethics and the return.