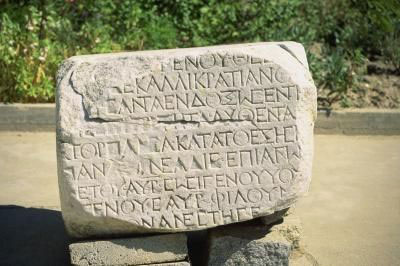 From the Hellenistic to the Byzantine Era

This conference has as its objective to give new impetus to the study of Greek literary epigrams.

This conference will investigate the changes that literary epigram underwent over the centuries, its interrelationship with other Greek literary genres and with the visual arts, as well as the factors which influenced its development through the centuries.

Abstracts (up to one page A4), along with the interested participant’s
personal data (name, affiliation, email) should be sent until the 30th of March 2013 via email to the following address: [email protected]

The conference will address the following topics: Contextualisation of literary epigrams of different periods within their religious, political, and geographical milieu; Cross-fertilisation between different epigrammatic subgenres; Poetic rivalry and imitation; Intertextuality; Poetic voice in different epigrammatists and subgenres; Development of poetic topoi within the genre; Mythic and other narrative modes; Interrelation between epigrams and inscriptions; Epigrams and patronage; Epigrams and iconography; Epigrams, anthologies, and performative context