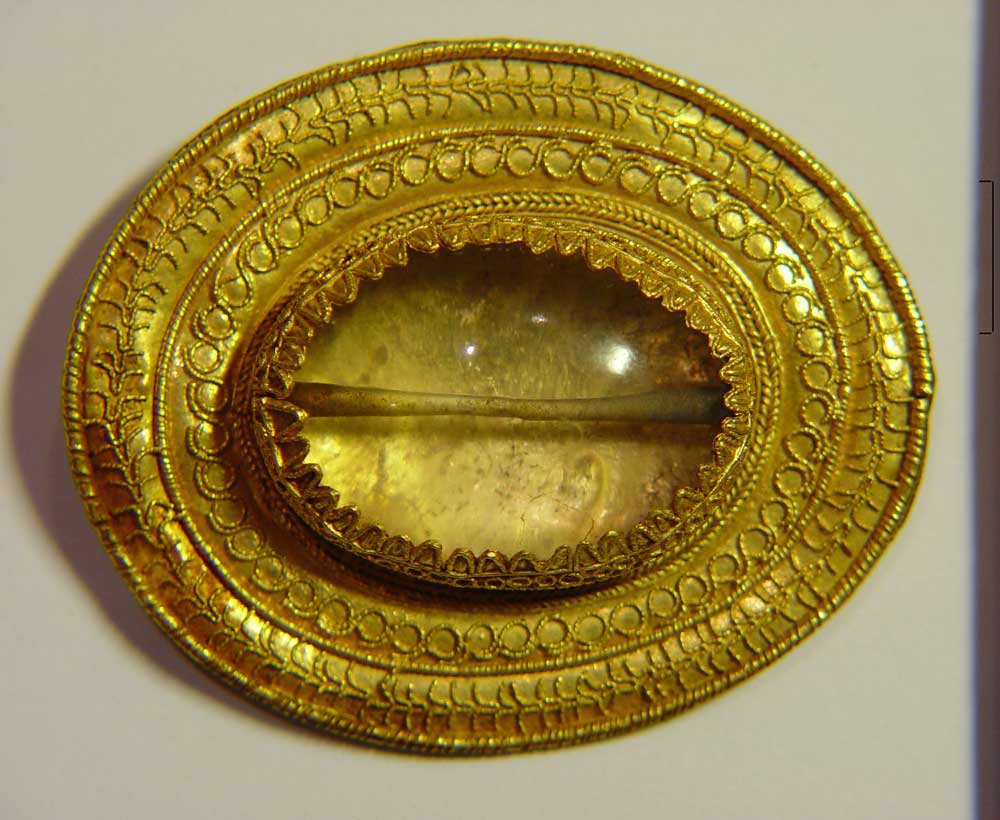 Hidden in a necropolis in the mountains of the Caucasus

Hidden in a necropolis situated high in the mountains of the Caucasus in Russia, located near the town of Mezmay, researchers have found the grave of a male warrior. The burial of the warrior was richly adorned and contained more than a dozen gold artifacts, iron chain mail and numerous weapons, including a 36-inch (91 centimeters) iron sword set between his legs.

That is just one impressive find in an abundance of ancient treasures dating back more than 2,000 years that scientists have uncovered there.

Among their finds are two bronze helmets, discovered on the surface of the necropolis. One helmet (found in fragments and restored) has relief carvings of curled sheep horns while the other has ridges, zigzags and other odd shapes.

The warrior’s grave appears to have been untouched, although the necropolis has been looted in the past. The tip of the sword he was buried with points toward his pelvis, and researchers found “a round gold plaque with a polychrome inlay” near the tip, as they write in a paper published in the most recent edition of the journal Ancient Civilizations from Scythia to Siberia.

The remains of three horses, a cow and the skull of a wild boar were also found buried near the warrior.

“These animals were particularly valuable among barbarian peoples of the ancient world. It was [a] sign of [the] great importance of the buried person, which was shown by his relatives and his tribe,” wrote team member Valentina Mordvintseva, a researcher at the Ukrainian National Academy of Sciences Institute of Archaeology, in an email to LiveScience. The animal bones and pottery remains suggest that a funeral feast was held in his honor.

Due to the lack of written records, researchers cannot say exactly who the warrior was, but rather than ruling a city or town, most likely “he was a chief of a people,” Mordvintseva said.

The site was in fact discovered by grave robbers in 2004. Rescue excavations began in 2005.

Based on the artifacts, researchers believe the warrior’s burial dates back around 2,200 years, to a time when Greek culture was popular in west Asia, while the necropolis itself appears to have been in use between the third century B.C. and the beginning of the second century A.D.

Researchers were careful to note that the artifacts cannot be associated to a specific archaeological culture. As Mordvintseva explained, “this region is very big, and not sufficiently excavated,” particularly in the area where the necropolis is located. “[I]t is situated high in mountains. Perhaps the population of this area [had] trade routes/passes with Caucasian countries — Georgia, Armenia etc.,” Mordvintseva stated.

While the people who used the necropolis were clearly influenced by Greek culture, they maintained their own way of life, said Mordvintseva. “Their material culture shows that they were rather very proud of themselves and kept their culture for centuries.”

This way of life includes a fondness for gold-working. The warrior’s burial included more than a dozen artifacts made of gold. Perhaps the most spectacular find was a gold fibula-brooch with a rock crystal at its center. Although the brooch was only 2.3 by 1.9 inches (5.8 by 4.8 centimeters), it had several layers of intricately carved decorations leading toward the mount.

“Inside the mount a rock-crystal bead has been placed with a channel drilled through it from both ends,” the researchers write.

The team was surprised to find that two of the warrior’s swords (including the one pointing toward his pelvis) had gold decorations meant to be attached. In one case a short 19-inch (48.5-cm)-long iron sword had a gold plate, with inlayed agate, that was meant to adorn its sheath. Until now, scholars had never seen this type of golden sword decorations in this part of the ancient world, the researchers write. The “actual fact that these articles were used to decorate weapons sets them apart in a category all of their own, which has so far not been recorded anywhere else.”