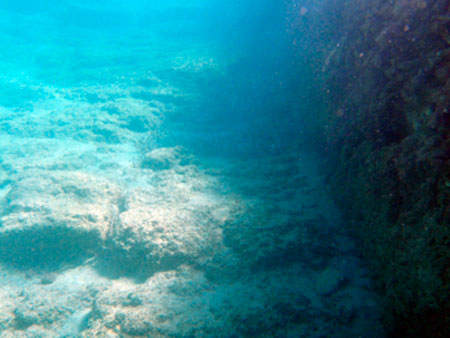 Minoan shipyard to be presented in conference

The first Minoan shipyard where big ships were constructed will be presented in a conference discussing Ancient Greek Technology. The conference will be held in Heraklion (Crete) on March 21. Researcher Dr. Minas Tsikritsis and geologist Stelios Manolioudis will give lectures about the shipyard.

As Mr. Tsikritsis claims, researchers have up to now based their findings about the development of Minoan seafaring and shipping on representations of ships which had 50 oars, so assumingly they had a length of 40-50 meters. This assumption is attested by the discovery on the coast of Agioi Theodoroi, close to the Minoan villa at Nirou Chani, of a big shipyard.

In the area there are carvings and the bases of Mionan buildings on land and in the sea, while at the north side of the sandy beach two big rectangular carvings have been found flooded with sea water. These are probably spaces where Minoan ships were built, says Mr. Tsikritsis.

The shipyard of Minoan period was first mentioned by archaeologist S. Marinatos, who wrote that the shipyard was carved deep within the small bay, where porous stone had been quarried out of a big rectangular cavity.