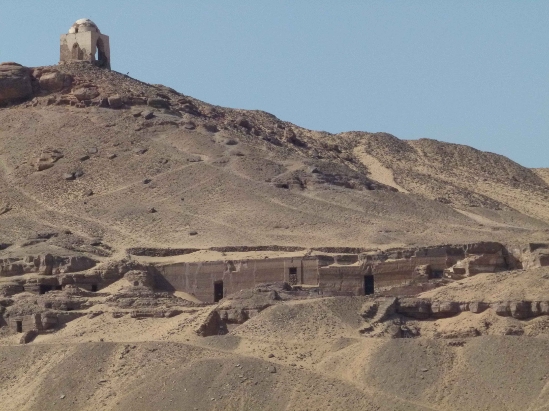 The tough life of ancient Upper Egypt’s rich and famous

The ancient Egyptians did not live as luxuriously as it was thought up to now, but, rather, suffered from hunger and malnutrition, a whole range of infectious diseases and an extremely high infant mortality rate. Furthermore, the governors of Aswan, on the border with Sudan, as well as their families, interbred with the black peoples of the neighboring country.

These are some of the conclusions drawn from the Qubbet el-Hawa research project, carried out by the University of Jaen, in which anthropologists from the University of Granada have participated, as well as the Supreme Council of Antiquities of the Arab Republic of Egypt.

The program involved excavating tomb no. 33 of the Qubbet el-Hawa necropolis, right opposite the modern-day city of Aswan, about 1000 km. south of Cairo. The tomb was constructed during the 12th Dynasty (1939-1760 BC), to house the body of one of the region of Aswan’s leading dignitaries, whose identity is still unknown.

The site was later re-used at least three times (18th, 22nd and 27th Dynasties),housing at least one chamber that remains intact, containing three decorated wooden sarcophagi. However, the bodies buried in the tomb were much more: the researchers have found over 200 skeletons and mummies belonging to the more recent occupations of the tomb (New Kingdom, 3rd Intermediate Period and Late Period).

Scientists from the UGR’s Laboratory of Physical Anthropology have been taking part in the field work to carry out the anthropological analysis of the bones of the mummies unearthed in the excavation, as well as calculating the number of individuals. The initial results of their work have led to some very interesting conclusions and have revealed new data not only about the ancient Egyptians physical characteristics, but also about the living conditions at that time. As Prof. Miguel Botella Lopez, director of the Laboratory, explains, “although the cultural level of the age was extraordinary, the anthropological analysis of the human remains reveals the population in general and the governors – the highest social class – lived in conditions in which their health was very precarious, on the edge of survival”.

According to the UGR anthropologists, life expectancy barely reached 30, “since they suffered from many problems of malnutrition and severe gastrointestinal disorders, due to drinking the polluted waters of the Nile”. This is revealed by the fact that the bones of the children had no marks on them, “which demonstrates that they died from some serious infectious disease”. Furthermore, the researchers have unearthed in the tomb a large number of mummies belonging to young adults of between 17 and 25 years old.

Prof. Botella points out that the tombs of the Qubbet el-Hawa necropolis contain inscriptions that are “of great historical importance, not only for Egypt, but for the whole of Humanity”. Thus, in the tomb of Governor Herhuf (2200 BC), the inscriptions describe the three journeys he made to central Africa, during one of which he brought back a pygmy; this is supposedly the oldest mention made of this ethnic group. Other inscriptions tell of Egypt’s relations with the neighboring region of Nubia (present-day Sudan) over a period of almost 1000 years.