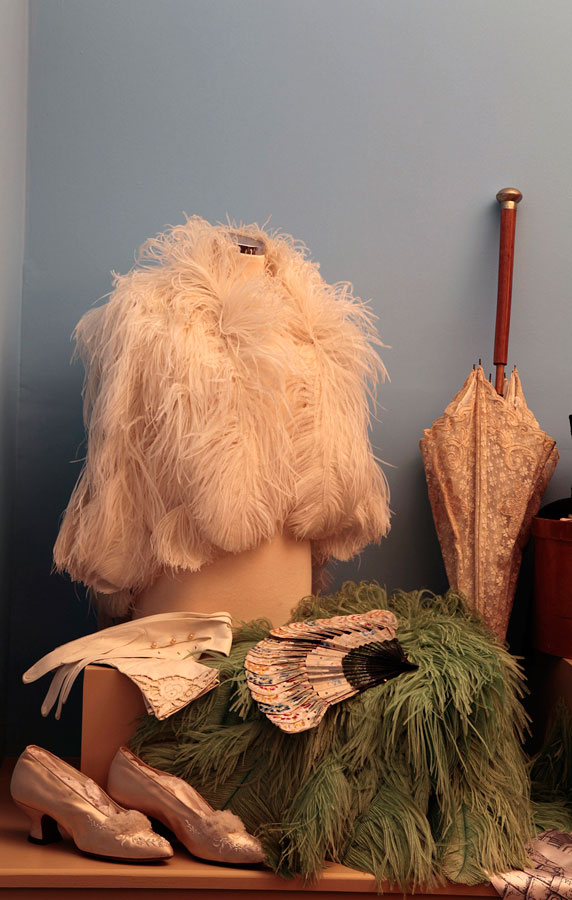 In 2014 the “V. Papantoniou” Peloponnesian Folklore Foundation will celebrate its fortieth birthday.

The PFF is based in Nafplion. It is a museum in the provinces, but in no sense can it be called a provincial museum. Ever since 1974 it has been a museum of influence and has provided the stimulus for the adoption of a scientific approach to exhibits in Greek museums, extravagant though that claim may seem. It is a member of all the international organizations concerned with costume. A tribute is due to the first Board of Directors, which was composed of: Angelos Terzakis, the writer; Popi Zora, folklorist and Director of the Museum of Greek Popular Art in Athens; Maria Barbarigou, folklorist; Georgia Tarsouli, folklorist and journalist; and Ioanna Papantoniou, the Chair of the Board. The musicologist Fivos Anoyanakis was an alternate member of the Board and acted a consultant to the PFF. A special tribute is due to Stelios Papadopoulos, the dynamic first Director of the PFF, who, after specialized studies at the École du Louvre and the Musée des Arts et Traditions Populaires, introduced into Greece new methods of studying, recording and publishing collections and research results, mainly in small museums.

In the course of the past forty years the PFF won the European Museum of the Year Award (EMYA) in 1981, but it has also been through incredible trials and tribulations, mostly financial. As an antidote, it decided to celebrate its fortieth anniversary as lavishly as possible, and on a large scale.

The festivities will open with a late-night dinner dance in the Museum at Nafplion, with a simultaneous slide show of items from the PFF collection on the outside walls of the building.

The “Brides” exhibition, a major event which will have opened in December in the new Benaki Museum in Pireos Street, Athens, will continue through January and February of 2014.

In January an exhibition of toys will be held at the PFF’s “Stathmos” Childhood Museum.

February sees the opening of an exhibition at the Hellenic Centre in London with the title “Patterns of Magnificence: Tradition and Reinvention in Greek Women’s Costume”. It is dedicated to the memory of Koula Lemos. The exhibition will be transferred to the Teloglion Art Foundation in Thessaloniki for the months of March, April and May and will then be taken to the Leventis Municipal Museum in Nicosia, another past winner (in 1991) of the European Museum of the Year Award.

Concurrently, there will be an exhibition of the PFF theatrical collection organized by our sister institution, the Foundation of the Hellenic World, in the foyer of the Theatron.

The Ilias Lalaounis Jewellery Museum will host an exhibition of priceless pieces from the PFF jewellery collection together with items from the Museum’s own collections.

The Lykeion ton Hellinidon (Lyceum Club of Greek Women) and Atopos are preparing surprise exhibitions on their own premises.

The Nafplion branch of the National Gallery of Greece will exhibit all the paintings by Linda Antoniadou-Vakirdzi in the PFF’s possession.

At the Fougaro, Cultural complex, following the exhibition of ladies’ handbags, the exhibitions of costume accessories will continue in the space made available to the PFF for the purpose.

The Dafni Cultural Centre – G. Bouzianis Museum will exhibit some of the paintings by Bouzianis’s pupil and friend, Nikos Chronopoulos, as well as two by Bouzianis himself, which were donated to the PFF by Nelly Chronopoulou.

The PFF will exhibit two ‘chitons’ designed by Paul Poiret (1920) and one ‘peplos’ by Mariano Fortuni (1910) for exhibition in the Nafplion Archaeological Museum.

Finally, the ICOM Costume Committee will once again hold its annual meeting in Greece, starting in Athens and then moving to Nafplion, with “The Political Dimension of Dress” as its working title.

The festive atmosphere will spread from the Museum to the town of Nafplion with the PFF making its presence felt in the local shops. Entrance to the Museum will be free and the exhibits in the large ground-floor showcase will be changed continually to reflect the events of 2014. The plan is that artists who work the Foundation will contribute ideas of their own to the arrangement of the other showcases, a practice initiated by the PFF in 2003 with the Cypriot artist Maria Loizidou.