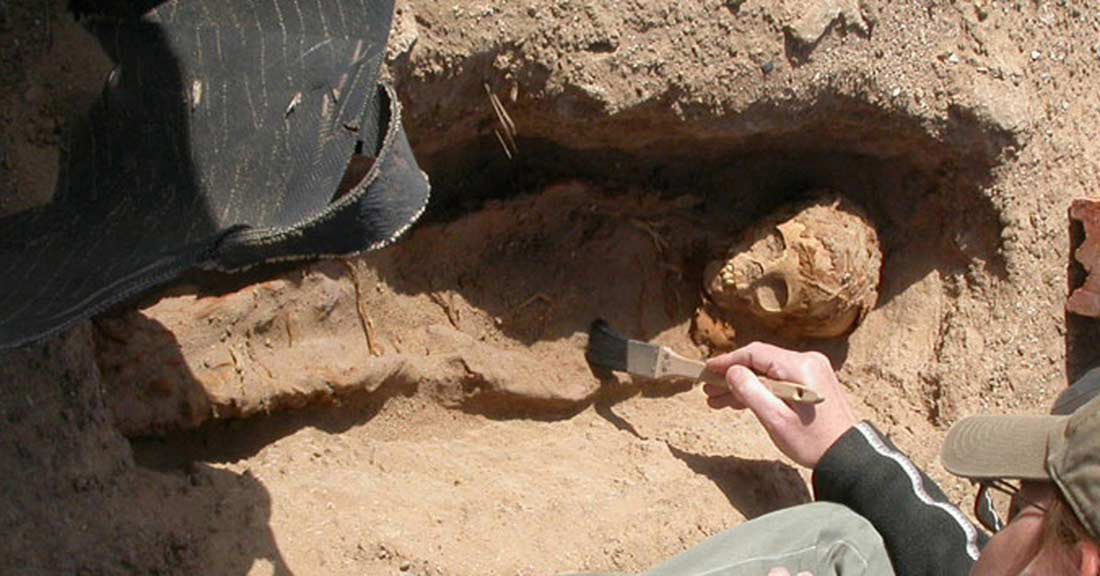 The majority of conceptions in Ancient Egypt was taking place in the summer, especially during July and August, with the majority of births happening during spring, new study suggests.

Researchers excavating the cemetery belonging to the Greco-Roman city of Kellis, in Egypt’s Dakhleh Oasis (around 720 klm. SW of Cairo), suggested that the city’s inhabitants were characterised by a relatively steady yearly pattern of procreation and birth periods, by studying the remains of stillborn babies as well as women of childbearing age.

The team examined 124 excellently preserved individuals that date to between 18 weeks and 45 weeks after conception, as well as a large number of women who presumably had died in childbirth. As the individuals’ graves were oriented toward the rising sun, something that changes predictably throughout the year, the researcher were also able to define the month of death as well as the month of the babies’ conception in each case.

The results were eye-opening. The peak period for the death of women of childbearing age, as well as of stillborn babies, was in March and April. Subsequently, the primary season for conception would be the summer! In detail, the new findings indicate that at Kellis conceptions increased by more than 20 percent above the site’s annual average.

According to Lana Williams, a professor at the University of Central Florida, the result was really important as conception didn’ t peak in summer months for other Mediterranean cultures. But how can this be explained? “Even though this was a Christian community, we know that they were still practicing, or having these social beliefs of, fertility being at its highest in the months of July and August”, Williams said. “We have local temple reliefs that show this, the annual inundation of the Nile being celebrated at Dakhleh”.

These patterns of conceptions and births would have likely continued back further into ancient times and occurred at other Egyptian sites as well, said Williams. In fact, they appear to have also continued into relatively modern times. “Interestingly, all the way up into the 1920s and 1930s, we still see this maxima in birth taking place at the same season [around March and April],” Williams said in regards to birth records from the World Health Organization that looked at rural Egypt.

On the contrary, the lowest point for conceptions during each years seems to have been January and February. This is likely to have happened due to certain sexual prohibition periods induced by the new religion, Christianity. According to Professor Peter Brown (Princeton University), Christians were supposed to avoid intercourse “on Saturday, on Sunday, on Wednesday, and on Friday, in the 40 days of Lent and before the other feasts at which they might take the Eucharist”. The people of Kellis may not have been as strict as these texts recommend, but conception did fall to a low point around January, a time close to both Advent and Lent.

The patterns also suggest some form of ancient contraceptives were in use.

“If you have this much of a tightly patterned conception, there has to be some form of contraception that was taking place,” Williams said, noting that ancient Egyptian medical texts tell of several methods that they believed acted to prevent pregnancy.

Contraceptive recipes from the Kahun Medical Papyrus, dating back about 3,800 years, included crocodile dung and honey in their ingredients. However, the way of induction into the body remains unclear. One fragment reads that for honey one was to “sprinkle [it] over her womb, this to be done on natron bed,” (translation by Stephen Quirke).

Williams said that the prospect of having to take dung filled medicine, and having sex with it in you, probably discouraged intercourse. “By aversion alone, it would probably work for contraception […]. The interesting thing is when you start to look at the ingredients, the high acid content that would be in crocodile dung, the anti-bacterial qualities of honey, it probably would take down the possibility of pregnancy by acting as a spermicide,” said Williams, adding that it would not have been as effective as modern-day contraceptives.

Still, there was one more problem to solve for the researchers. If births were occuring mostly in April and May, why Roman census records indicated May and June as the time of maximum births? “We don’t want to pay our taxes until the last moment, so let’s not do it, let’s put off filing that document until we have to,”suggests Williams, speculating on why they would have put off recording births. For the ancient Egyptians living under Roman rule, it seems sex, birth, death and taxes were all linked together.