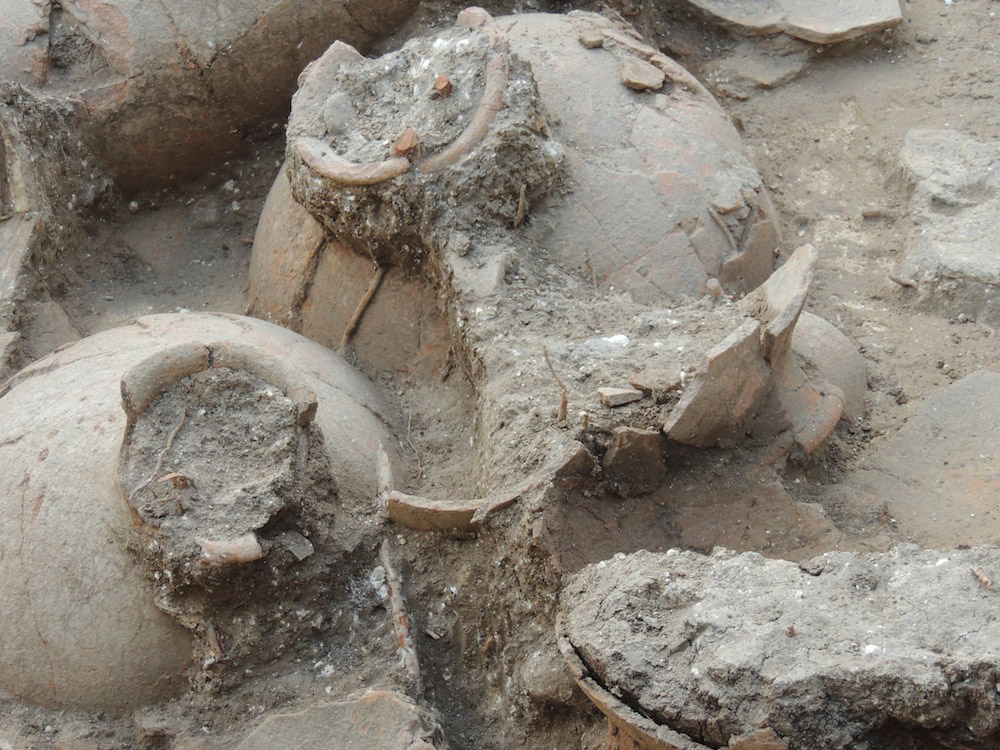 Ancient brew was similar to retsina

Archaeologists have uncovered the oldest known palatial wine cellar in the Middle East at the site of Tel Kabri in Northern Israel.

The wine storage room was revealed within the remains of a sprawling palace dating back to about 1700 B.C. that was built and occupied by the Canaanites. The palace was destroyed around 1600 B.C. by a sudden cataclysm, possibly an earthquake. It may have been this earthquake that crushed the wine storage room, leaving toppled jars for archaeologists to uncover.

The storage room stocked at least 3,000 bottles’ worth of the intoxicating beverage in massive pottery jars, researchers reported on Nov. 22 at the annual meeting of the American Schools of Oriental Research in Baltimore. The ancient wine bore little resemblance to the Bordeaux and Chianti of today — it was preserved and spiced with resin and herbs, including juniper, mint and myrtle.

Instead, the closest modern analogue is retsina, the Greek wine flavored with pine resin, study researcher Assaf Yasur-Landau of the University of Haifa, told reporters. “If you take retsina and you pour a bit of cough syrup inside, I guess you get something quite similar,” Yasur-Landau said.

The find is important less for the wine’s palate and more for what it reveals about the culture of the ancient Canaanites, a group that dominated what is now Israel and Lebanon. Texts and inscriptions from the era describe herbal wines, but this is the first true chemical evidence of their existence.

The researchers were digging in a spot they believed to be outside the palace walls in July when they came across a large jar about 3 feet (1 meter) tall, on its side. They dubbed the jar “Bessie” and started excavating it. By the time Bessie was free from the dirt, the team had found 39 other jars surrounding it. They estimate that the jars were held in a storage room measuring about 16 feet by 26 feet (5 m by 8 m). Together, the 40 jars could have held about 2,000 liters (500 gallons) of wine, the team said.

The field team, led by Yasur-Landau and Eric Cline (The George Washington University), and consisting also of student workers, pulled double shifts working on the excavation. They unearthed the last jar with two days to spare before the end of the season.

At the excavation site, Brandeis University researcher Andrew Koh, who specializes in archaeological chemistry, took shards of the pots and carefully boiled them in solvents to extract any organic material that had soaked into the clay. He then took the resulting solutions back to the United States and chemically analyzed them to determine what the jars held. The project was unusually thorough in that the researchers tested all 40 jars, not just a sample of one or two.

The results revealed a luxurious ancient concoction, Yasur-Landau said. Tartaric and syringic acids, both hallmarks of wine, proved that the jars indeed held vino. Resins would have helped preserve the wines. If the ancient wineswere anything like retsina, the resins also would have lent a distinctive turpentine flavor to the beverage.

Honey sweetened the wine, the researchers found, and juniper, mint, cinnamon bark and other herbs flavored it. The jars were remarkably consistent in their contents, suggesting that winemakers were sticking to a recipe. The vesselsare plain and without markings or labels to reveal their contents.

The storage room is next to a large hall that archaeologists think was used for banquets. Cattle bones and other signs of meat consumption have been found in the palace, Yasur-Landau said. The Canaanite leader who lived in the compound may have entertained foreign guests in the hall. The palace contains Aegean art, and the wine includes imported ingredients, pointing to maritime trade around the Mediterranean.

Doors from the storage room may lead to at least one other storage chamber, but the area has yet to be excavated, the researchers said.

Texts from the ancient town of Mari, Syria, describe herbed wines from this time period, Yasur-Landau said. “This time, we have not only the physical evidence of jars, but also we have the scientific evidence for the contents of these jars,” he said.

“We’re making attempts [to recreate the wine] right now, in the coming months and even as we speak to identify all of these [additives] with a level of sophistication we don’t think has ever been seen before,” Koh said.

The chemical analysis of the ancient wine continues — perhaps in enough detail for creative winemakers to one day recreate this ancient Canaanite brew.