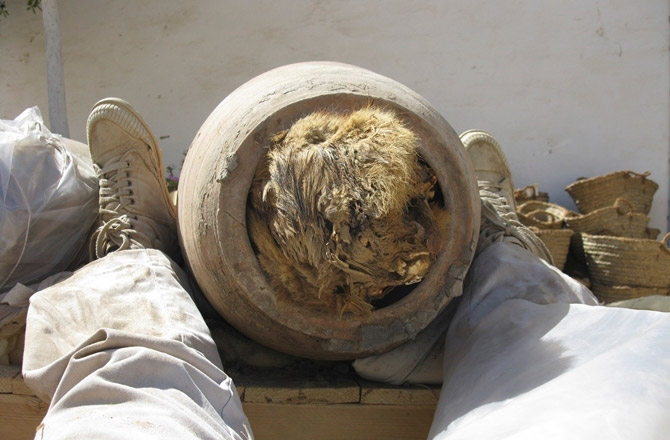 Five curious canine burials, among them two of extreme importance, were revealed recently by  the North Abydos Project team at Shunet ez-Zebib, Abydos.

Shunet ez Zebib, is a large mud-brick structure, and is considered one of Egypt’s oldest standing royal monuments. The site was built around 2750 BC and was dedicated to Khasekhemwy, a second dynasty king. So far, it was known for the the thousands of ibis burials in jars that had been recovered in the dunes nearby. It was there where archaeologists located five pots, each one containing the remains of a dog, buried some 3,000 years ago. Of the five dogs,  two were so well preserved they might be crucial for our knowledge of Egyptian embalming methods. Nicknamed  Houdini and Chewie, these two dogs are to become our guides to the past.

“The site provided a very secure structure, with conveniently soft, sandy fill that was easy for quick burials within a sacred space,” Salima Ikram, professor of Egyptology at The American University in Cairo, wrote on Shunet ez Zebib in a Festschrift in honor of animal cult and Egyptian religion specialist Dieter Kessler.“Although it is common to find birds in pots, it is rare to find other animals buried in this way,” she says, as no canine burials in pots have been recorded in the many dog cemeteries scattered throughout Egypt.

“Of the many jars that were recovered, only 13 have thus far been properly investigated. Of these, four were empty, three contained ibises, and five were filled with dogs,” Ikram states. While three pots contained skeletonized remains of dogs, the last two housed Houdini and Chewie, two animals with their fur largely intact.

“These jars were probably made and used for some sort of storage, and then re-used as coffins for the dogs. They are quite charming as the dogs are curled up in the pots,” Ikram said.

A Close Look at the Burials

Houdini was found in a large two-handled pot, and was buried without any wrappings. The animal’s fur was brown to auburn-coppery, with portions darker and stiffer, as if they had been anointed by some substance such as oil or even resin.

“It seems as if he were put into the pot, hind limbs first, then adjusted and the rest of the body pushed in so that he was curled around,” Ikram said.

Although it is likely that Houdini is a dog, certain identification of the species is impossible as the animal could not be removed from the jar without compromising its integrity.

“The color of his almost auburn fur is unusual in a dog, as is the length of the hairs, which tend to be shorter in Egyptian dogs than the 3.5 inches found in the case of Houdini,” Ikram said.

“The only other viable identification would be a fox, but the fur’s color is not in keeping with the foxes found in Egypt today,” she added.

Not as well preserved as Houdini, Chewie was found in a large jar filled with the broken pieces of another large pot, which was used as a packing material to keep the dog in situ. The lack of evidence of any textile in the jar suggests Chewie was buried without bandages.

“Once the broken bits of pottery were removed, the dog contained within the pot was completely visible. The bones from his right foreleg were pushing through the skin and yellow fur,” Ikram added.

According to the researcher, both animals were mature, probably around five years of age.

“They were probably votive offerings unless they held the position of sacred animals — perhaps the pot burials are indicative of their being Sacred rather than just Votive,”Ikram said.

“We could not figure out how such a large animal was fit into the pot, so we named him after the magician, Houdini,” Ikram said on the first dog, although it seems that Chewie was also a similar case. How the two animals were pushed into pots from which they cannot be extracted now remains a mystery. Another mystery revolves around their embalming method.

“Without further examination and chemical testing it is not possible to understand the process by which these two animals were preserved,” Ikram said.

Among the possible embalming scenarios, the most likely treatment would include evisceration, dessication and defatting with natron salt. Oiled and resined, the animals were then pushed into the jars.

“Sealed and buried in layers of protective sand, and cocooned in their jars, the animals’ bodies were well preserved so that they could serve as vehicles for their spirits, or Ka, for eternity,” Ikram said.