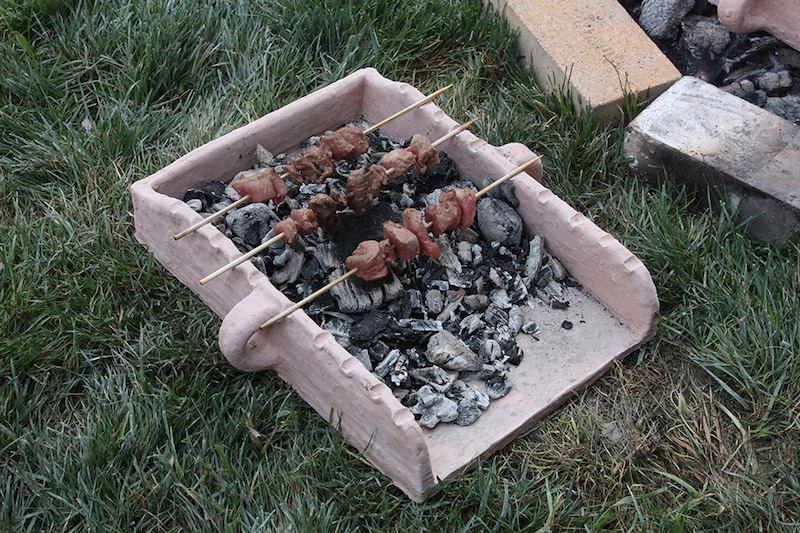 Revealing the Secrets of Mycenaean Barbecue

They used portable grills at their picnics

Among the ruins of Mycenaean palatial settlements, archaeologists have repeatedly found clay griddles and trays. Despite they had defined the finds’ general use, it was yet unknown how these artefacts were used in detail.

For example, it was unknown whether the clay trays -rectangular ceramic pans that sat underneath skewers of meat- would have been placed directly over a fire, catching fat drippings from the meat, or if the pans would have held hot coals like a portable barbeque pit.

Also, the round griddles were covered with tiny holes on their one side, while the other was smooth. Which side was facing up cooking was still a mystery.

This is what scientist Julie Hruby, of Dartmouth College, has tried to explain through her research, which she presented at the Archaeological Institute of America’s annual meeting in Chicago last Saturday (Jan. 4).

“We don’t have any recipes. What we do have are tablets that talk about provisions for feasts, so we have some idea of what the ingredients might have been, but in terms of understanding how people cooked, the cooking pots are really our best bet.”, said Hruby in an interview with Live Science.

To solve these culinary mysteries, Hruby and ceramicist Connie Podleski, of the Oregon College of Art and Craft, turned to experiments. After mixing American clays to mimic Mycenaean clay, they created two griddles and two trays in the ancient style. With their replica coarsewares, they tried to cook meat and bread.

On the trays, they found that when placed over a fire pit, their surface is too thick to produce a well-cooked meal. On the contrary, meat came out cooked and tasty when coals were placed inside the tray, with the meat skewers placed just over the trays’ coal-covered area. It is also suggested that the trays were used outdoors.

“We should probably envision these as portable cooking devices — perhaps used during Mycenaean picnics,” Hruby said.

Griddles, generally connected with bread-making, were likely indicating an ancient non-stick technology. While the bread was most likely to stick when placed over the smooth side, it could be removed without a problem when cooked on the hole-covered side, although, even in that case, cookers should spread oil on the surface quite often.