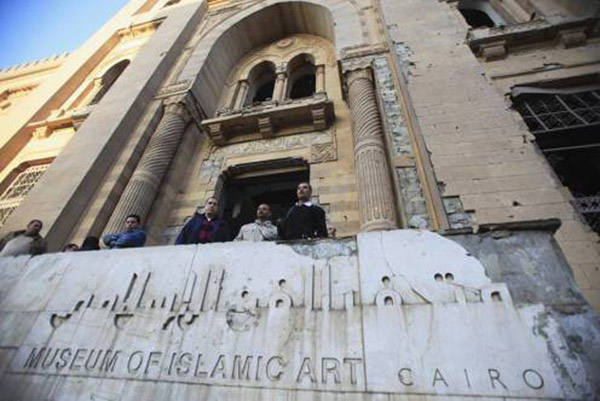 The façade of the Museum of Islamic Art in central Cairo has been seriously destroyed by a powerful car bomb that exploded outside the adjacent Cairo Security Directorate early on Friday morning. The blast also destroyed the façade of the nearby Egyptian National Library and of the Ministry of State for Antiquities’ Archives building. According to a report by the Egyptian Ministry of Health, four people were killed and at least 76 were injured.

Minister of State for Antiquities Mohamed Ibrahim, who inspected the museum to assess damages,  confirmed that the blast had destroyed the façade of the building, which had featured rich patterns and elaborate decoration in the Islamic style. The columns at the front of the building have also been destroyed. “The museum building is in a real mess,” said Ibrahim, describing the interior of the museum as “topsy-turvy.” According to Ibrahim’s account on Ahram Online, a number of ceilings inside the building collapsed, and some artefacts were damaged. The Minister also told the CBC TV channel that a large number of antiquities were destroyed as a result of the explosion, adding that glassware pieces were the most affected.

Security Director of the Egyptian National Library and Archives Emad al-Qahwagy told Youm7 Friday that the explosion damaged the water pipes of the museum. This led to the destruction of many manuscripts whose protective glass cases were broken, by water.

The Ministry of State for Antiquities has since announced a restoration campaign, insisting that all of the damaged objects can be fully restored. UNESCO has pledged $100,000 for the museum’s restoration.