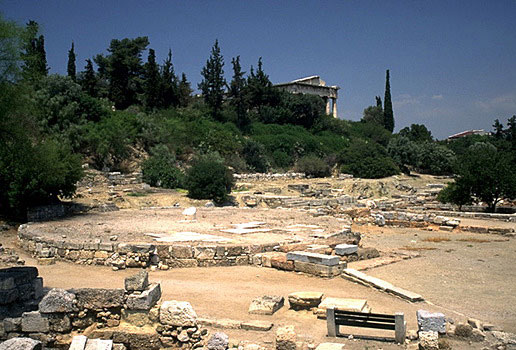 Next Thursday, February 27, 2014 (7.00 p.m.) Ann Steiner (NEH Fellow, ASCSA; Shirley Watkins Steinman Professor of Classics, Franklin & Marshall College) will give a lecture at the ASCSA about the dining customs of the Prytaneis in the Athenian Agora.

In the 1930’s, the American School of Classical Studies Excavations in the Athenian Agora recovered the architectural history of the Tholos, constructed around 460 B.C.E. Several key deposits of pottery helped to identify the long history of this building, striking because of its round plan.

A research project begun in 2013, 75 years later, analyzes fully for the first time the pottery deposits associated with the building to learn more about the dining customs of the magistrates who occupied it, the Prytaneis, chairmen of the Council of 500. This group included a diverse set of citizens, selected by lot, from three property classes and varied locations in Attica. They had to find common ground quickly, to come together to enable self-government by the polis.

Did the habits of consumption at the Tholos require sophisticated social competence like that needed to succeed at elite symposia? Or were they more egalitarian, reflecting the isonomia that the democratic reforms of Ephialtes sought to buttress?

This lecture focuses on the earliest deposit in the Tholos, looking at what the repertory of ceramics at the time of the building’s inauguration as the seat of the Prytaneis can tell us about the ambience of their shared commensality. Evidence from other dining in the Agora, both private and public, which has come to light in subsequent excavations, helps to illuminate the unique character of dining at the Tholos and the surprising clarity with which it expressed the ideals of the Athenian polis.