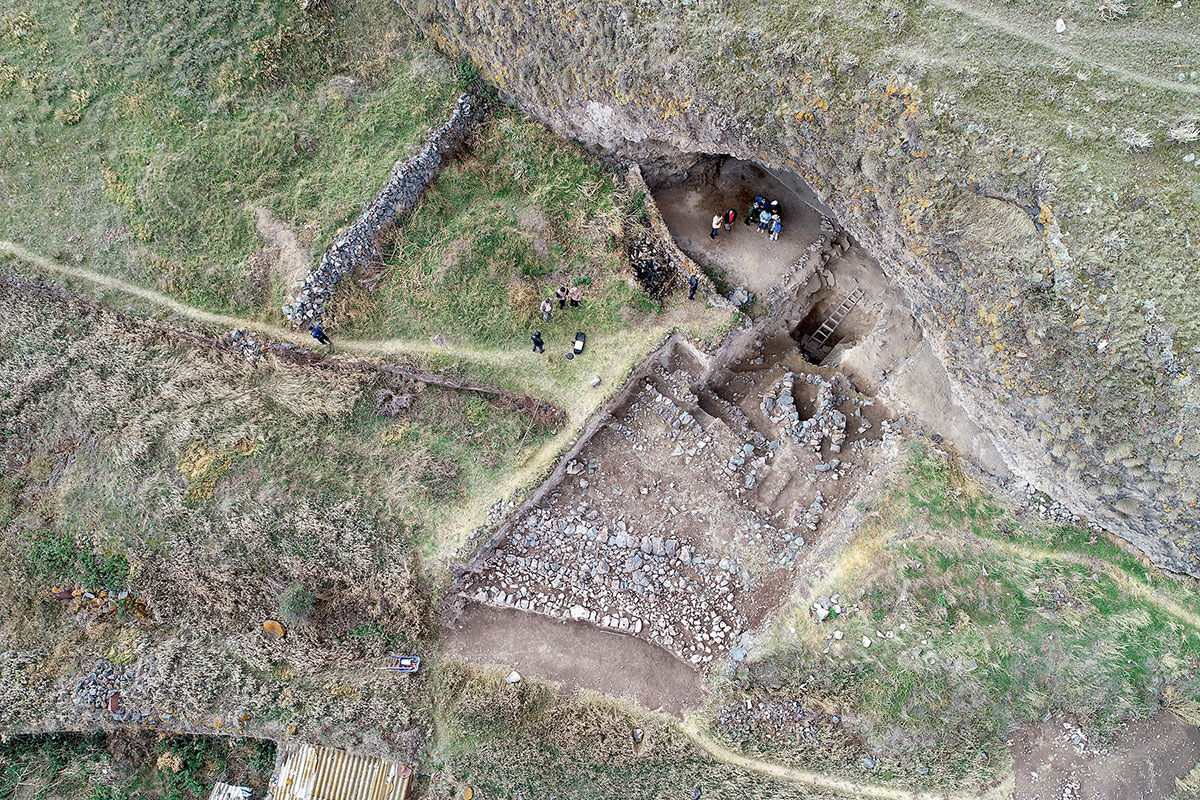 The Thread to the Needle: How our Ancestors Used the Native Flora

Under the aegis of the University of Oslo, an international research team has extracted and analyzed plant DNA from the sediments of the Armenian “Aghitu-3” cave. About 40,000 to 25,000 years ago, the cave was used as a shelter by humans of the Upper Paleolithic. A detailed analysis of the DNA shows that the cave’s inhabitants may have used numerous plant species for a variety of purposes, including for medicine, dye, or yarn. The excavations were led by the National Academy of Sciences of Armenia and the research project “The Role of Culture in Early Expansions of Humans (ROCEEH),” which is based at the University of Tübingen and the Senckenberg Research Institute and Natural History Museum in Frankfurt. The study was recently published in the “Journal of Human Evolution.”

At first glance, there is nothing that sets the “Aghitu-3” cave apart from the numerous other basalt caves in the highlands of southern Armenia. However, the 11-meter-deep, 18-meter-wide, and 6-meter-high cave holds something special: it is one of just a few sites containing finds from the Upper Paleolithic in the Republic of Armenia. The cave sediments reveal information about human settlement during a period of about 39,000 to 24,000 years before present. “Stone artifacts, animal remains, bones, tools, shell beads, and charcoal from campfires have already been found in the cave,” explains Dr. Andrew Kandel, the excavation’s scientific director from the ROCEEH project at the University of Tübingen, Germany, and he continues, “Although we know that plants played a fundamental role in the lives of prehistoric people beyond serving as food, plant parts such as seeds, leaves, fruits, and roots are rarely preserved, since they are organic and usually decay quickly, which makes them difficult for us to study.”

In order to still be able to provide information about plant use in the Paleolithic period, the research team extracted plant DNA from the cave sediments. The results of the DNA analyses indicate that the sediments contained a larger amount of genetic material from plants during periods of heavy human use of the cave than during periods when people visited the cave less frequently. “We therefore attribute most of the plants found to human involvement. People collected the plants during their daily activities. Once used, the remains of the plants were left in the cave where, to our delight, the DNA was preserved in the sediments. By analyzing the DNA and comparing it with previously identified pollen types, we gain a more complete picture of the plants that were available to people and how people might have used them,” explains co-author PD Dr. Angela Bruch from the ROCEEH project at the Senckenberg Research Institute and Natural History Museum Frankfurt.

The researchers were able to identify a total of 43 plant orders – all but five of which are suitable for human use, according to the study. Some of the plants have medicinal properties, while others can be used as food, as flavoring, or as a mosquito repellent. The discovery of DNA from plants that provide dyes or fibers suggests that people in this region used plants to make sewing thread or twine and to string up shell beads. “This find fits into the overall picture of “Aghitu-3” like a missing puzzle piece – needles made from animal bones were also found in the cave during our excavations. We now know with a high degree of probability that our ancestors sewed in the cave, and how they did it,” Kandel said.

According to the researchers, analyzing plant DNA from sediments is an exciting new tool for studying human behavior in prehistoric times. “In the future, we will use this method at other sites to learn even more about our ancestors,” concludes Bruch.