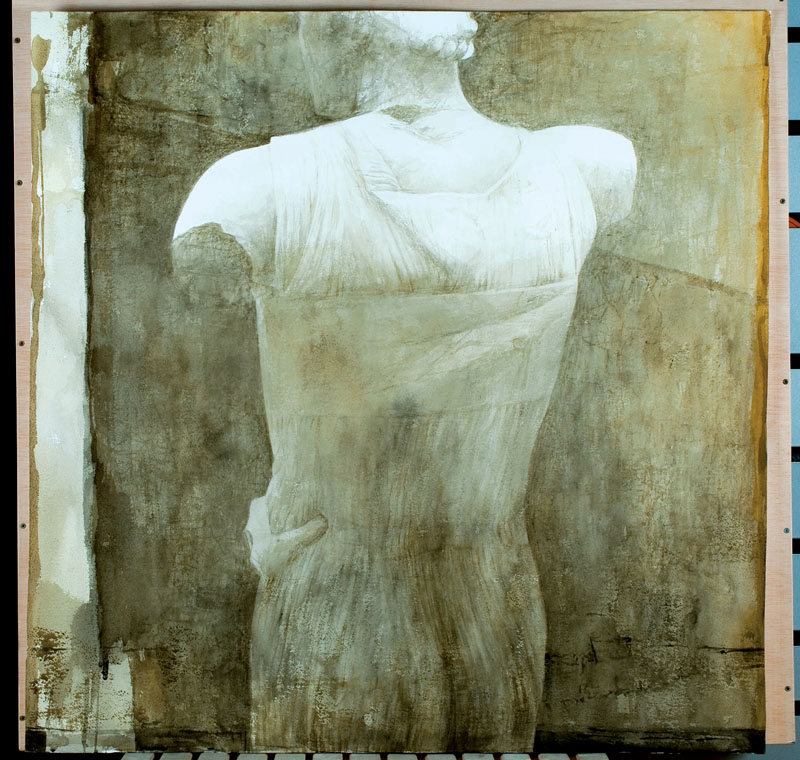 Mediterranean sea, routes, ports, nature, people, culture. The Archaeological Museum of Thessaloniki in collaboration with the Fundación Pedro Cano, in Spain, presents the temporary exhibition of Pedro Cano paintings entitled ”IX Mediterranean Seas”. The exhibition will be inaugurated on June 18, 2014 and run through October 19, 2014.

The exhibition represents 54 aquarelles and drafts of the Spanish artist with themes inspired by the landscape, life and the ancient monuments of the Mediterranean. In particular the exhibition “travels” to three islands, Mallorca, Patmos, Sicily, and six cities, Alexandria, Carthagena, Istanbul, Naples, Split and Venice. Nine Mediterranean symbols, nine mythical sites. A long journey taking place with the magic invocation of watercolours through the filter of Pedro Cano’s personal experience and memory becomes a journey to the culture of the Mediterranean and his paintings become the thread offered by the artist in an imaginary labyrinth of an imposing story.

“Alexandria… I could feel, however, the strong relation that it had kept with Greece. I could eat and drink using my precarious Greek and, most of all, I was thrilled to know that there was a daily trip to Heraklion, the Capital of Crete, which unfortunately was suspended shortly thereafter… When I started thinking about how to present the city of Alexandria, the first image that came to my mind were books, even though, in the legendary library, the book did not yet exist. I have worked with open books. It is very exciting to visit the house where Kavafis lived, or have a coffee at Pastroudis, where Durrell once did, and gradually descend down to the Corniche, so close to the sea that it looks like the water will overflow at any moment…” (Pedro Cano)

Pedro Cano’s work, with exceptional sensitivity and historical insight, depicts symbols, places, monuments, memories and scenes of daily life. Thus the Mediterranean unfolds in front of us, like an emotional journey from port to port, like a timeless theatrical scene of present and past cultures, like a crucible of peoples and traditions with different languages and religions.

“Patmos… The first few times I came to this small island in the Dodecanese archipelago, I found wreaths and dried fruit garlands crowning the doors of the white houses across the island, especially in Hora – the city where the fortress-monastery is. Little by little, I learned that these garlands were called Protomaia and they were prepared on May 1st. They are a sort of lucky charm for people, and are made with what the field and orchards offer at the time. On that day, everyone leaves their homes as in a pilgrimage and spend part of the morning outdoors. On their return home, they weave leaves, flowers and fruits to make wreaths of different sizes, which the sun, rain and water will subsequently tear down. My six wreaths tell this story, with plants, flowers and fruits that have much to say about the place they grow in…” (Pedro Cano)

Pedro Cano depicts elusive places, with an aura of eternity, permeated with light refracted into mirages. The artist chooses to describe each of them not merely by mentioning the cultural heritage of Mediterranean civilizations, but also capturing new aspects and unusual extensions.

His artworks bring to mind the words of Fernand Braudel «… in the Mediterranean, every gulf is a small homeland and by itself a complex world”.

“Venice… I eventually opted for something that has always filled me with curiosity, and about which no one has ever given me an exact explanation: the significance and colours of those wooden poles sticking out of the water, which are sometimes used as moorings for gondolas and other boats, though many of them are completely unused… just as in the wonderful book that Joseph Brodsky wrote about Venice, where he talks about old mirrors imprisoned in dark palaces along the canals which, according to the Russian Nobel Prize, have forgotten how to reflect images because nobody looks at them anymore…” (Pedro Cano)

The exhibition “IX Seas of the Mediterranean” by Pedro Cano is presented at the Archaeological Museum of Thessaloniki as a parallel exhibition of the main temporary exhibition of 2014-2015 “The Europe of Greece. Colonies and coins from the Alpha Bank collection”.

In the framework of the exhibition, a workshop  will be held from Monday 16 to Saturday 21, June, 2014, under the supervision of the artist, with the participation of artists from Spain, Italy and Greece.

The opening ceremony will be accompanied by Greek and foreign songs repertoire of the musicians Costas Kizakis and Pavlos Karathanassis.