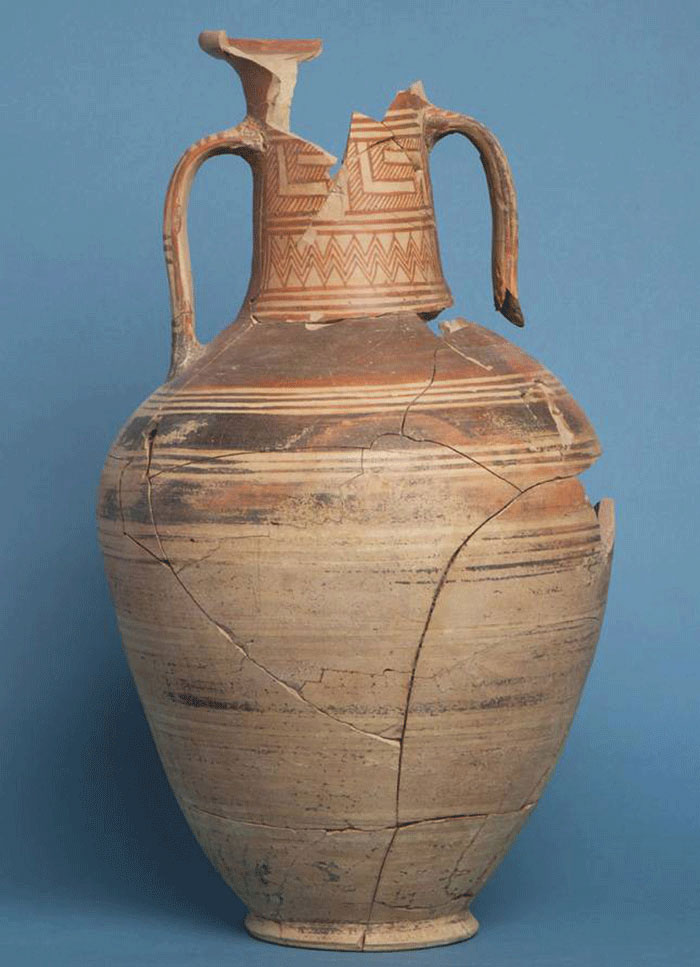 Geometric pottery trove revealed in Corinth has been proved a true case study of the pottery production in the area during the 8th century BC.

The group of well preserved decorated pottery vessels has been the most important group of finds from a tomb dated to 800-760 BC and unearthed back in 2006 in Panayia, Corinth, near the narrow piece of land joining Attica with the Peloponnese in central Greece. The tomb hoasted a single deceased who was found interred in a limestone sarcophagus. Pottery vessels were accompanying the deceased, placed beside the sarcophagus, while a larger pottery group, consisting of 13 mostly complete pots, was found within a niche dug on one of the funerary pit’s “walls”. Archaeologists from the American School of Classical Studies, who excavated the tomb, published their study on its contents only recently, in the journal Hesperia.

What did they specify? That “the wealth of the occupant here is indicated by the sarcophagus and the large number of vessels,”, which was mostly locally produced. Apart from two Athenian imports, all the other vessels were Corinthian. As it was the habit during the Geometric period, the vessels were decorated with a variety of designs, including wavy, zigzagging lines and meandering patterns that look like a maze. And while the style was developed primarily in Attica, Corinth doas not seem to have had stayed behind in following the trend.

Indeed, Corinth was a rising powere during that period. According to ancient records, a group of rulers called the Bacchiadae came to power in Corinth in 747 B.C. (a few decades after the tomb was constructed. Bacciadae supported Corinth’s colonial activity, founding colonies in modern-day Sicily and Corfu, thus reinforcing Corinth’s trade activity and increasing its wealth. Corinthian goods, including the city’s fine pottery, would be traded throughout the Mediterranean world. In that light, the tomb’s content indicate that even before the Bacciadae, Corinthian workshops already produced quality products, a fact which would have been “the foundation stone” for the wealth that was to come.