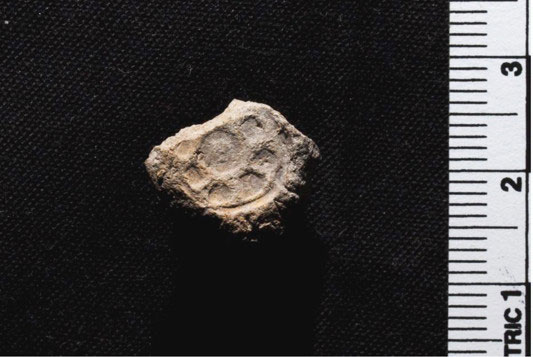 Many modern scholars dismiss David and Solomon as mythological figures and believe no kingdom could have existed in the region at the time the Bible recounted their activities. The new finds provide evidence that some type of government activity was conducted there in that period.

Jimmy Hardin, associate professor in the MSU Department of Anthropology and Middle Eastern Cultures, said these clay bullae were used to seal official correspondence in much the same way wax seals were used on official documents in later periods.

Hardin, co-director of the Hesi Regional Project, has been excavating each summer at Khirbet Summeily, a site east of Gaza in southern Israel, since 2011. Hardin’s findings were published in the December 2014 issue of Near Eastern Archaeology, a leading, peer-reviewed journal for this field.

“Our preliminary results indicated that this site is integrated into a political entity that is typified by elite activities, suggesting that a state was already being formed in the 10th century B.C.,” Hardin said. “We are very positive that these bullae are associated with the Iron Age IIA, which we date to the 10th century B.C., and which lends general support to the historical veracity of David and Solomon as recorded in the Hebrew biblical texts.

“These appear to be the only known examples of bullae from the 10th century, making this discovery unique,” he said.

The finds contribute significantly to an ongoing debate in the archaeological community about whether governments or states existed in the early Iron Ages. The artifacts hold far-reaching implications for the growing number of scholars who maintain that such political organization occurred much later than biblical texts suggest.

“Some text scholars and archaeologists have dismissed the historic reliability of the biblical text surrounding kings David and Solomon, such as recorded in the Bible in the books of Kings and Second Samuel, which scholars often date to the Iron Age IIA or 10th century B.C,” Hardin said.

Political and/or administrative activities in a borderland area

“The fact that these bullae came off of sealed written documents shows that this site — located out on the periphery of pretty much everything — is integrated at a level far beyond subsistence,” he said. “You have either political or administrative activities going on at a level well beyond those typical of a rural farmstead.”

The journal article describes the dig site as a borderland area between the heartlands of Judah and Philistia. It was originally assumed to be a small Iron Age farmstead. However, the excavation of the bullae and other recent archaeological finds indicate a level of political organization previously thought not to exist at that time.

“We believe that the aggregate material culture remains that have been discovered at Summeily demonstrate a level of political-economic activity that has not been suspected recently for the late Iron Age I and early Iron Age IIA,” the journal article states. “This is especially the case if one integrates data from nearby Hesi [a much more extensively excavated site].

“It is our contention that, when taken together, these reflect a greater political complexity and integration across the transitional Iron I/IIA landscape than has been appreciated recently, as scholars have tended to dismiss trends toward political complexity (e.g., state formation) occurring prior to the arrival of the Assyrians in the region in the later eighth century B.C.E.”

Two of the bullae Hardin’s team excavated have complete seal impressions, two have partial seal impressions, and two others have none. Two bullae were blackened by fire. One bulla has a well-preserved hole where the string used to seal the document passed through the clay. The impressions in the bullae do not contain writing.

The dig site was chosen so researchers could study border dynamics between the nations of Philistia and Judea in the area previously dated to the 10th century B.C.

“We were trying to identify in the archaeological record the differences between Philistia and Judah,” Hardin said. “Why is there a border in this area and only at this time? We’re trying to learn what was the process by which these political entities were created. Within that larger question, you have a number of questions about whether the archaeological record matches the historical record from the texts, and if it disagrees, how do we reconcile the two.”

The bullae the team found were in the layer of material tested by the National Science Foundation-funded Center for Rock Magnetism at the University of Minnesota. The markings were examined and dated by Christopher Rollston, an epigrapher in the Department of Classical and Near Eastern Languages and Civilizations at George Washington University.

Jeff Blakely of the University of Wisconsin-Madison is co-director of the Hesi Regional Project and has studied the region for 40 years. Blakely explained how the age of the bullae was determined.

“In addition, archaeomagnetism dating, which is based on the strength and direction of the earth’s magnetic fields in the past, also suggested the layers in which the bullae were found must be 10th century. Further research and analysis should refine our dating to decades rather than a century,” he said.

From the start of the project, archaeologists have tried to determine what people were doing in the region of Khirbet Summeily, Blakely said.

“Generations of scholarship have suggested farming, but over the past few years, we have slowly realized that humans rarely farmed this region,” he said. “It was a pasture. Shepherds tended sheep and goats under the protection of their government. Finding the bullae this past summer strongly supports our idea that Khirbet Summeily was a governmental installation.”