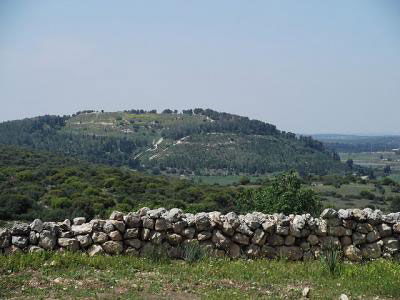 This summer, Tel Aviv University’s Sonia and Marco Nadler Institute of Archaeology is adding another excavation to their already expansive list of seven active digs. Azekah, a city of the ancient kingdom of Judah that features prominently in the Bible — both as a main border city and the fortification which towers above the Ellah valley — is the site of the legendary battle between David and giant Goliath. The new dig will be led by TAU’s Prof. Oded Lipschits, Dr. Yuval Gadot, and Prof. Manfred Oeming from Heidelberg University, Germany.

The Assyrian king Sennacherib described Azekah as “an eagle’s nest … with towers that project to the sky like swords.” The Judahite stronghold bordered the land of the Philistines and was strategically positioned for military action and trade. This culturally significant city could hold the answer to historically significant riddles about the development of the Kingdom of Judah, the relationship between Judah and its neighbors, and the Judahite culture.

The dig’s first season will run from July 15 – August 24, 2012. Registration is now open to volunteers for the first season of what the directors call a truly international dig, with partner universities from all over the world. “In every square that we are excavating, there will be participants from all over the world,” says Dr. Gadot. “It’s a great way to get to know new people and gain valuable experience.” More details about the new dig are available at www.azekah.com.

Beneath the layers of destruction

After years of excavation at Ramat Rahel near Jerusalem, the heart of the Kingdom of Judah, the researchers are looking to Azekah for insight into what life was like on the periphery of that ancient kingdom. “We are asking questions about the history of Judah from the westernmost border,” says Prof. Lipschits, noting that the main Philistine Kingdom of Gat was located just a few kilometres to the west of Azekah. The site probably served as the setting for the tale of David and Goliath, the story of an unlikely Judahite hero who overcame the Philistine’s champion warrior, because Azekah was truly “a meeting point of the two different cultures,” he explains.

Beyond its cultural significance, Azekah was also a gateway to the Judahite kingdom, positioned along the main roads leading from the coastal plains to the Judean Hills at the heart of the kingdom. Although the city flourished for millennia, its natural riches and strategic position made it an inviting target for foreign powers.

The researchers hope that extraordinary findings await them beneath the destruction layers of the city, which was conquered in 701 B.C.E. by the Assyrians and in 586 B.C.E. by the Babylonians. When a site is abandoned, the people who once lived there would usually collect their gatherings and move on. But this wasn’t possible in the wake of a sudden and catastrophic event, such as war, says Dr. Gadot. Under the destruction layer, cultural artefacts are well-preserved, and there could also be remnants of an invasion, like a siege ramp, like the one that was found in the Judahite city of Lachich.

The Lautenschläger Azekah Expedition is a continuation of a scientific cooperation started in 2003 between Tel Aviv University and Heidelberg Universities at the excavation Ramat Rahel. The new excavation of Azekah brings together a team of international scholars, students, and volunteers. Participants in the dig need an optimistic attitude and an adventurous spirit, say the excavation directors.

Over the course of the dig, volunteers will be living and working together in the nearby Nes Harim guest house in the north of Israel, which belongs to the Jewish National Fund. All participants will be invited to attend lectures and cultural and social activities. Students can also complete classes for university credit.

“This is a very multi-national experience, and the friendships that people build are truly amazing,” says Dr. Gadot. He adds that the project is looking forward to accepting volunteers who are new to the field. Team spirit is the most important qualification, he says, and students of archaeology, enthusiasts, and adventurers are all welcome.