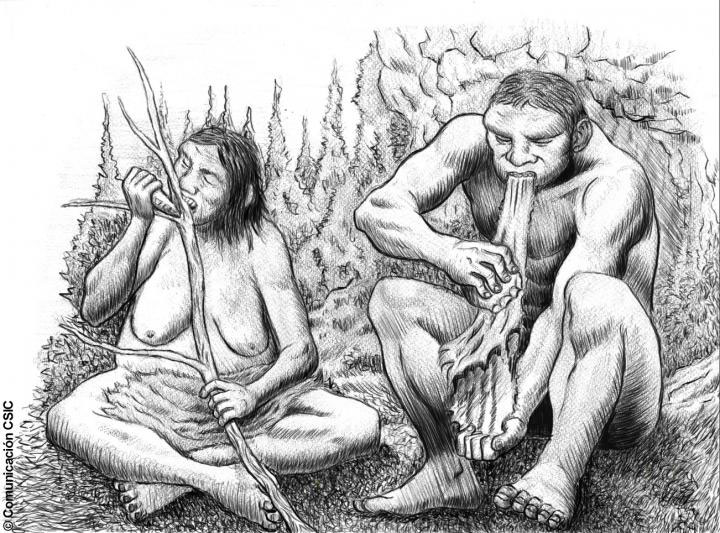 Neanderthals based their lifestyle on a sexual division of labor

Neanderthal communities divided some of their tasks according to their sex. This is one of the main conclusions reached by a study performed by the Spanish National Research Council (CSIC), published in the Journal of Human Evolution. Their discovery is important, as until now the sexual division of labor was thought to be typical of sapiens societies.

This study, which analyzed 99 incisors and canine teeth of 19 individuals from three different sites (El Sidron, in Asturias – Spain, L’Hortus in France, and Spy in Belgium), reveals that the dental grooves present in the female fossils follow the same pattern, which is different to that found in male individuals. Analyses show that all Neanderthal individuals, regardless of age, had dental grooves.

Using the mouth as a third hand

According to Antonio Rosas, CSIC researcher at the Spanish National Museum of Natural Sciences: “This is due to the custom of these societies to use the mouth as a third hand, as in some current populations, for tasks such as preparing the furs or chopping meat, for instance”. Rosas specifies that “what we have now discovered is that the grooves detected in the teeth of adult women are longer than those found in adult men. Therefore we assume that the tasks performed were different”.

Other variables analyzed are the tiny spalls of the teeth enamel. Male individuals show a greater number of nicks in the enamel and dentin of the upper parts, while in female individuals these imperfections appear in the lower parts.

Women for garments, men for tools

It is still unclear which activities corresponded to women and which ones to men. However, the authors of the study note that, as in modern hunter-gatherer societies, women may have been responsible for the preparation of furs and the elaboration of garments. Researchers state that the retouching of the edges of stone tools seems to have been a male task.

Almudena Estalrrich, CSIC researcher at the Spanish National Museum of Natural Sciences, adds: “Nevertheless, we believe that the specialization of labor by sex of the individuals was probably limited to a few tasks, as it is possible that both men and women participated equally in the hunting of big animals”.

Rosas concludes: “The study of Neanderthals has provided numerous discoveries in recent years. We have moved from thinking of them as little evolved beings, to know that they took care of the sick persons, buried their deceased, ate seafood, and even had different physical features than expected: there were redhead individuals, and with light skin and eyes. So far, we thought that the sexual division of labor was typical of sapiens societies, but apparently that’s not true”.