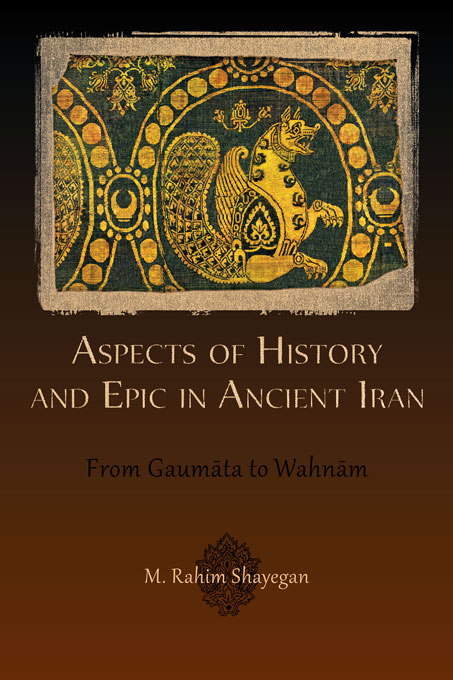 Aspects of History and Epic in Ancient Iran: From Gaumāta to Wahnām

The Center for Hellenic Studies has announced the forthcoming online publication of Aspects of History and Epic in Ancient Iran: From Gaumāta to Wahnām, by M. Rahim Shayegan on the CHS website. The work is available for purchase in print via Harvard University Press.

Aspects of History and Epic in Ancient Iran focuses on the content of one of the most important inscriptions of the Ancient Near East: the Bisotun inscription of the Achaemenid king Darius I (6th century BCE), which in essence reports on a suspicious fratricide and subsequent coup d’état. Moreover, the study shows how the inscription’s narrative would decisively influence the Iranian epic, epigraphic, and historiographical traditions well into the Sasanian and early Islamic periods.

Intriguingly, our assessment of the impact of the Bisotun narrative on later literary traditions—in particular, the inscription of the Sasanian king Narseh at Paikuli (3rd–4th centuries CE)—necessarily relies on the reception of the oral rendition of the Bisotun story captured by Greek historians. As Rahim Shayegan argues, this oral tradition had an immeasurable impact upon the historiographical writings and epic compositions of later Iranian empires. It would have otherwise remained unknown to modern scholars, had it not been partially preserved and recorded by Hellanicus of Lesbos, Herodotus, Ctesias, and other Greek authors. The elucidation of Bisotun’s thematic composition therefore not only allows us to solve an ancient murder but also to reevaluate pre-Thucydidean Greek historiography as one of the most important repositories of Iranian epic themes.

M. Rahim Shayegan is Associate Professor of Iranian at the University of California, Los Angeles.