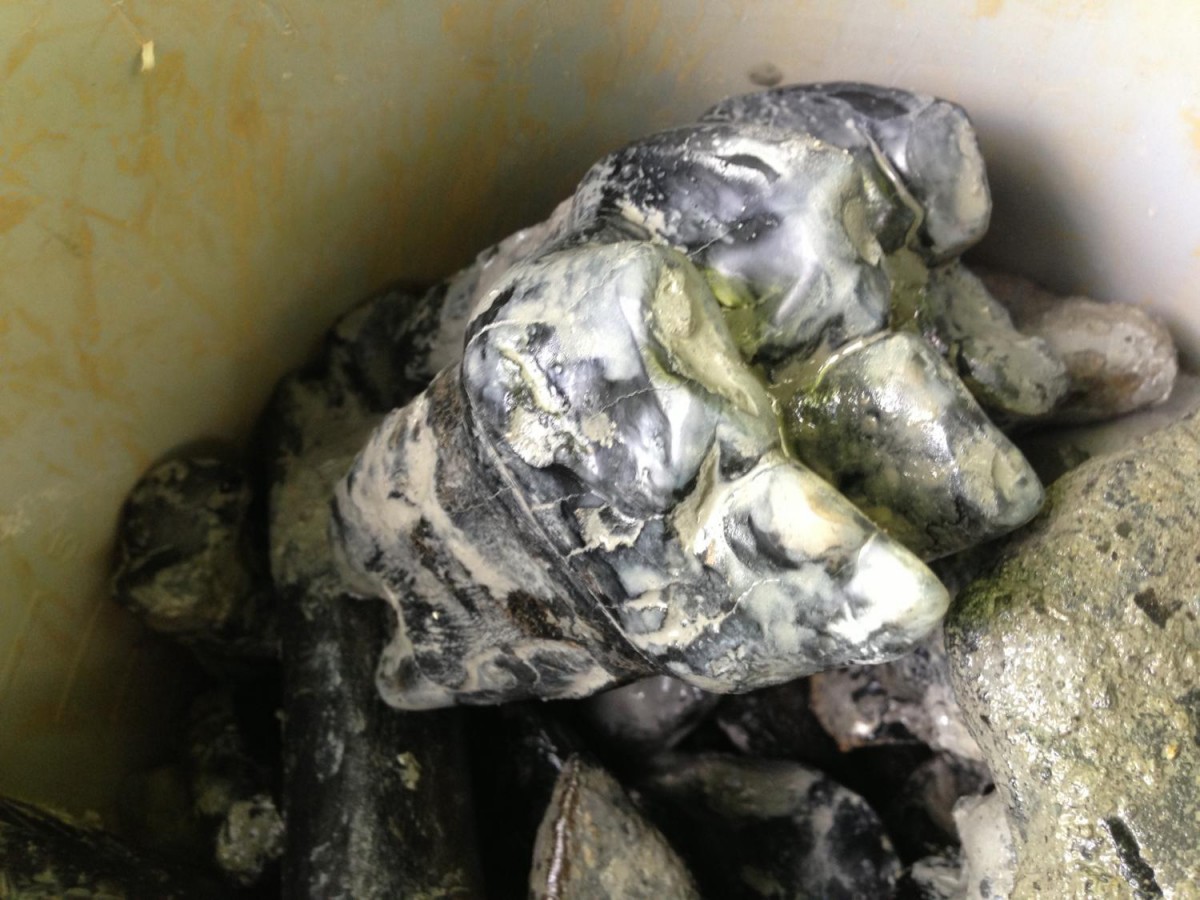 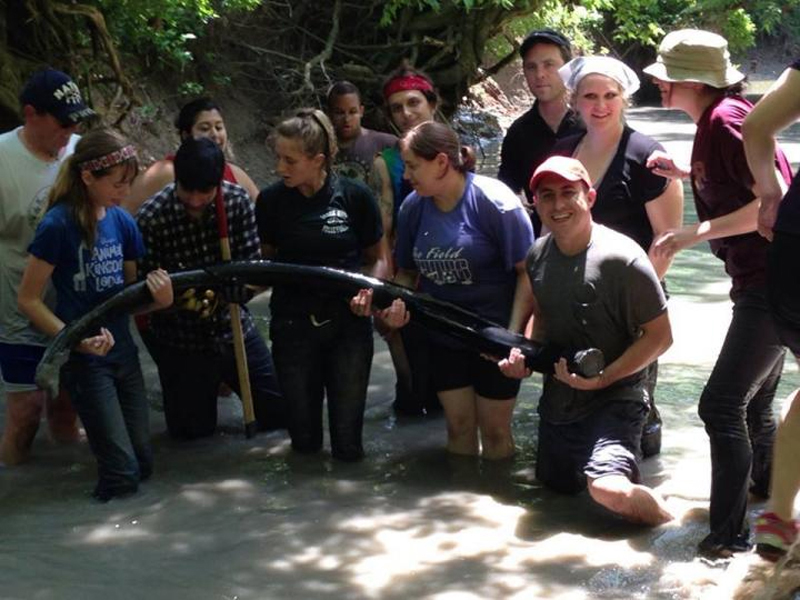 Or died off in their old Kentucky home...

Researchers at an old geological site talk ‘dirt’ about how Ice Age climate change led to the extinction of mammoths and mastodons, but to the evolution and survival of bison, deer and other present-day species.

“The answers to extinction, survival and evolution are right here in the dirt,” says University of Cincinnati Quaternary science researcher Ken Tankersley, associate professor of anthropology and geology. “And we are continually surprised by what we find.” While many scientists focus on species’ extinction wherever there has been rapid and profound climate change, Tankersley looks closely at why certain species survived.

For many years he has invited students and faculty from archeology and geology, and representatives from the Cincinnati Museum Center and Kentucky State Parks to participate in an in-the-field investigation at a rich paleontological and archeological site not too far from UC’s campus.

Through scores of scientific data extracted from fossilized vegetation and the bones and teeth of animals and humans, Tankersley has been able to trace periods of dramatic climate change, what animals roamed the Earth during those epochs and how they survived. And his most recent evidence reveals when humans came on the scene and how they helped change the environment in Big Bone Lick, Kentucky.

“What we found is that deforestation efforts over 5,000 years ago by humans significantly modified the environment to the degree that the erosion began filling in the Ohio River Valley, killing off much of the essential plant life,” says Tankersley. “At that point animals had to either move, evolve or they simply died off.”

His recent paper on the findings is published online in the March issue of the prestigious journal Quaternary Research titled, “Quaternary chronostratigraphy and stable isotope paleoecology of Big Bone Lick, Kentucky, USA.”

Big Bone Lick (BBL) State Park in north-central Kentucky has over 25,000 years of well-preserved bones, rocks and other archeological treasures that have been easily accessible since the 1700s. But until recently, the evidence for why some of this region’s former inhabitants evolved into present-day animals, while others simply died off, was buried deep in the sediment.

Only 20 minutes away from UC’s main campus by interstate, Tankersley and his students have been taking advantage of BBL’s rich and accessible history for the past three years. By digging through layers of soil, scavenging around in creek bottoms and scraping specimens from bone fragments, they have unearthed a treasure trove of ancient specimens – some more than 25,000 years old.

“One of my students, Stephanie Miller, discovered a 10-foot mastodon tusk beneath the water table at the bottom of a creek when she reached below the mud and felt a hard object pointed at the end,” says Tankersley. “That tusk is now on display at the Cincinnati Museum Center.”

Possessing a proud ancestry of part Native American Cherokee, Tankersley feels a strong need for all this discovery is in his bones, too.

Tankersley originally thought that when the ice reached its maximum advance 25,000 years ago – covering the area now known as Sharonville – the mammoths were grazing on C4 tundra vegetation of herbaceous plants and sedges. To his surprise, what he found is that he couldn’t have been more wrong.

While mammoths and mastodons are two distinct species of the proboscidean family, they were originally thought to have lived in different epochs in time and in separate areas of the world:

-Mastodons existed earlier, about 27-30 million years ago primarily in North and Central America.

-Mammoths came on the scene 5.1 million years ago arising out of Africa.

The evidence at BBL now shows that mammoths and mastodons both roamed together – possibly through intercontinental migration – and were both eating the same vegetation, even with the difference in the shape of their molars.

The original model of the changing landscape botanically, and in terms of the animals’ diet was completely wrong, and was a big shock to Tankersley.

Tankersley’s evidence also revealed significant periods of radical shifts in environmental temperature since the last glacial maximum more than 25,000 years ago, which caused an increase in the deposit of sediment that was greater than the system was able to support. And those radical shifts from cold and dry to warm and moist significantly altered the landscape and the vegetation and plant life.

“To determine what animals roamed the area and how they survived, we looked at the stable carbon and nitrogen isotope chemistry of both the animals and plants that were in the sediment for the past 25,000 years,” says Tankersley. “Since we are what we eat, we discovered that the mammoths, mastodons and bison were not eating the plants we originally thought. As it turns out, they were eating more C3 vegetation, which is tree leaves and weedy vegetation more like we see outside today.”

After incidents like cataclysmic cosmic events caused temperatures to drop and darkened the air with clouds of poisonous gas, the resulting climate change presented challenges for most plant and animal species to continue living. According to Tankersley, life at that time became a true test of survival skills for all living things, so those that could move or adapt to their new surroundings survived – many by evolving into a smaller, lighter and faster species.

Larger animal species that could not move fast or for long distances starved or were imprisoned in the muddy landscape and became easy prey for hungry predators.

“My students discovered all of this,” says Tankersley. “My job in this ‘Surviving Climate Change’ project was to give them the resources and tools and teach them the scientific techniques we use, but then let them be the discoverers, which is exactly what happened.”

Survival of the most flexible

At BBL, Tankersley focused on which species survived and which ones went extinct. They determined that during times when food sources were declining, animals had to move to more fruitful environments or learn to do with less food, which ultimately led to the evolution of today’s surviving species.

Looking closer at those survival patterns, Tankersley found that species like caribou could no longer make a living in this area, but they could up north. And although bison are still around, they are a lot smaller than they were thousands of years ago.

The moral to this story, explains Tankersley, is that many species evolved into smaller animals over time as their food sources started to decline. While some larger species simply died off from a lack of necessary resources, bison and deer were two mammals that were able to survive by evolving with a smaller body mass and shorter stature.

“If you look at a species and you have an environmental downturn or major change in the amount of solar radiation, the amount of water moisture and the amount of frost-free days, can all plants respond to that equally? Of course not,” says Tankersley. “As individuals, we all have different tolerance levels for change. So in the case of the caribou, when the climate changed rapidly and profoundly it could no longer make a living at BBL. But it could continue to make a living up north where it had the environment for survival.

“Species get bigger when there is a lot of food available and smaller when there is not. So the bison downsized, but the mammoth and mastodon did not. They could neither move nor downsize quickly enough so they simply died off.”

Beavers the size of black bears

Tankersley’s team also discovered different species within a species. For example, while there were small beavers then just like there are now, from 25,000 until 10,000 years ago there were also large beavers the size of black bears.

“The larger extinct beaver lost its battle to survive because it was dependent on a certain environment that was dying off, but the modern beaver could make its own environment and consequently survived,” says Tankersley. “So there is a lesson there. Animals had to adapt, downsize or go extinct.”

Last year Tankersley and his students excavated over 17,000 specimens that are now housed at the Cincinnati Museum Center. While digging up animal bones they found evidence of humans who had butchered these animals.

To effectively date the plant and animal specimens, Tankersley’s students examined radiocarbon and optically stimulated luminescence (OSL) ages. Dating much of the material to 5,000 years ago using OSL procedures, Tankersley was shocked to find the evidence for human activity and a new anthropological time period now called the Anthropocene – when humans became the most powerful, natural force.

“So much of science is serendipitous,” claims Tankersley. “What the students discovered serendipitously, by dating these deposits, was that humans came in and broke the sod.

Deeper into the sediment, Tankersley found that humans had dug pits into the ground to process animal skins to wear as clothing. Based on ethnographic French literature, the Native Americans had put piles of rocks inside the pits along with hickory nuts, then they used hot rocks to boil the water. The oily, greasy meat of the hickory nut would float to the top and the non-edible remains like the shell and hull would sink to the bottom.

“They would skim it off and drink the water, as it was very nutritious,” says Tankersley. “When they were finished, they would grab the softened deerskin and leave the rocks and nutshells behind, which is what we found.”

To protect their hickory-nut trees from squirrels and other animals, Tankersley found evidence for human deforestation, where large areas of trees were cleared to create separate hickory-tree orchards, protecting them from animal invasion. That deforestation and degradation resulted in substantial erosion of the uplands, which caused the overbank and backwater flooding of the Ohio Valley area.

The changing vegetation, as a result of this deforestation also contributed to the demise, adaptation or evolution of several species.

Furthermore, Tankersley and his students uncovered evidence for animals being hunted by humans during this same period. Looking closely at the hash marks in animal bones, there was strong clues that humans had greatly contributed to the extinction of some of the species in BBL like the larger bison.

Consequently, through deforestation and arboriculture behavior, and the hunting and extinction of many species of animals, Tankersley found clear evidence that humans indeed contributed to the changing landscape even as far back as 5,000 years ago.

“It’s hard to believe, but there is no volcano, no earthquake or tsunami that is moving more sediment than we are,” says Tankersley. “Humans are the most powerful force on the planet right now.”

To help prevent an underlying assumption of landscape change or stability where it does not exist, Tankersley’s team efforts show that both natural and human anthropogenic erosional processes were taking place 5,000 years ago. This activity is directly responsible for the primary and secondary deposits of animal, plant and human artifact remains at Big Bone Lick, Kentucky.