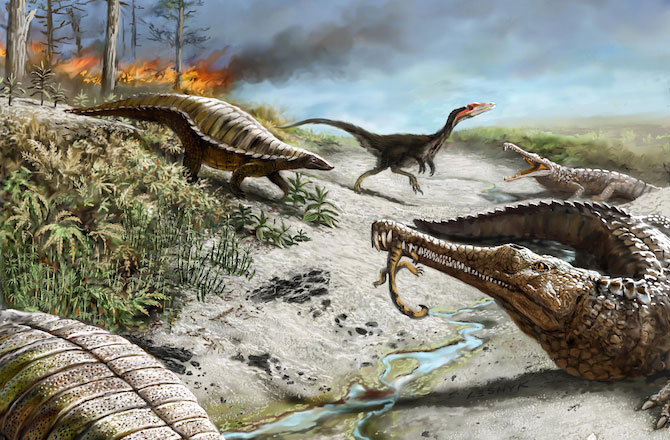 Climate swings lasting millions of years too much for dinos

For more than 30 million years after dinosaurs first appeared, they remained inexplicably rare near the equator, where only a few small-bodied meat-eating dinosaurs made a living.

The long absence at low latitudes has been one of the great, unanswered questions about the rise of the dinosaurs.

Now the mystery has a solution, according to scientists who pieced together a detailed picture of the climate and ecology more than 200 million years ago at Ghost Ranch in northern New Mexico, a site rich with fossils.

The findings, reported today in the journal Proceedings of the National Academy of Sciences (PNAS), show that the tropical climate swung wildly with extremes of drought and intense heat.

Wildfires swept the landscape during arid regimes and reshaped the vegetation available for plant-eating animals.

“Our data suggest it was not a fun place,” says scientist Randall Irmis of the University of Utah.

“It was a time of climate extremes that went back and forth unpredictably. Large, warm-blooded dinosaurian herbivores weren’t able to exist close to the equator–there was not enough dependable plant food.”

The study, led by geochemist Jessica Whiteside, now of the University of Southampton, is the first to provide a detailed look at climate and ecology during the emergence of the dinosaurs.

Atmospheric carbon dioxide levels then were four to six times current levels. “If we continue along our present course, similar conditions in a high-CO2 world may develop, and suppress low-latitude ecosystems,” Irmis says.

“These scientists have developed a new explanation for the perplexing near-absence of dinosaurs in late Triassic [the Triassic was between 248 million and 205 million years ago] equatorial settings,” says Rich Lane, program director in the National Science Foundation’s (NSF) Division of Earth Sciences, which funded the research.

“That includes rapid vegetation changes related to climate fluctuations between arid and moist climates and the resulting extensive wildfires of the time.”