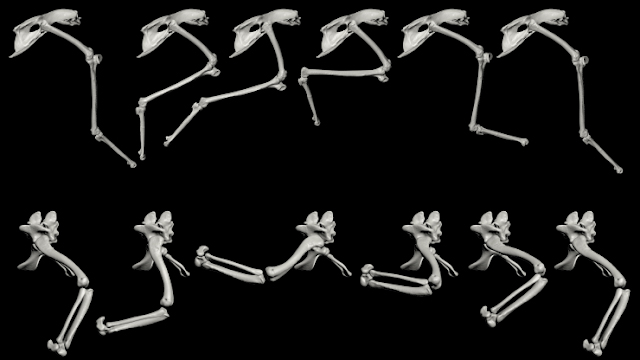 To figure out how dinosaurs walked, start with how they didn’t

By analyzing limb poses from modern birds and alligators with innovative 3D imaging technology developed at Brown University, scientists have developed a better way to infer how extinct animals might have moved from place to place.

Paleontologists have made great strides in understanding how extinct animals like dinosaurs walked, ran, swam and flew when they were alive — but much about the mechanics of how different species moved remains uncertain. A new study led by researchers at Brown University offers a new perspective on this long-standing conundrum.

The research, published on Monday, Feb. 8, in Proceedings of the National Academy of Sciences, used an innovative 3D imaging technology developed at Brown called X-ray Reconstruction of Moving Morphology — or XROMM — to develop a method that could unlock new insights into how dinosaurs and other animals moved.

“By combining the latest technology for studying joint motion with unprecedented amounts of joint pose data, we’ve uncovered surprising new information that will improve reconstructions of locomotion in extinct animals,” said Armita Manafzadeh, a Ph.D. candidate in ecology and evolutionary biology at Brown and lead author of the research.

And improving the ability for scientists to study animal biomechanics is important, Manafzadeh says, because knowledge of how individual species moved can be used to advance understanding of major evolutionary transitions and transformations, “like how animals with backbones came out of the water and started walking on land, how they went from walking on four legs to two, and how flight evolved.”

Traditional methods for studying how extinct animals walked rely on process of elimination. Fossil bones are fit together and manipulated to determine a joint’s mobility — all of the poses that can be assumed without the bones bumping into each other or coming apart. But because that approach only rules out how joints couldn’t have moved, scientists must then turn to other data sources — musculoskeletal models, trackway measurements, robotic simulations — to figure out how an animal’s joints realistically moved in life. In short, the approach has its limitations.

To determine whether joint mobility data might actually be more informative than paleontologists have tended to assume, Manafzadeh worked with two colleagues: Stephen M. Gatesy, a Brown professor of biology and co-director of the XROMM Technology Development Project; and Robert Kambic, who earned his Ph.D. from Brown as a student in Gatesy’s lab and is now at the Center for Movement Studies at the Kennedy Krieger Institute and the department of neuroscience at Johns Hopkins University School of Medicine.

Using XROMM’s 3D imaging technology, the researchers designed a study involving two living animals, the helmeted guineafowl and the American alligator, that are closely related to extinct dinosaurs. The researchers captured X-ray videos of the animals walking and having their limbs manipulated, took CT scans of the skeletons, and then used XROMM to measure nearly 600,000 joint poses. The researchers plotted these poses on three-dimensional joint mobility maps.

Manafzadeh and her colleagues were excited to find consistent patterns that relate joint mobility to the specific poses used during locomotion in birds and alligators. These patterns, they say, can be applied to more accurately reconstruct the walking and running cycles of animals that no longer roam the earth.

“Thanks to these pose usage patterns, it turns out that what dinosaurs couldn’t do with their joints will give us some big clues about how they walked,” Manafzadeh said. “What’s more, this information has been right in front of us, hidden within the data that paleontologists are already collecting. We just didn’t know how to appreciate it yet.”

The researchers say that their confidence in the patterns is supported by the hundreds of thousands of joint poses they’ve been able to measure and analyze. “We can now pursue future research to ask how broad those patterns are, how they evolved and why,” Gatesy said.

They also hope that future studies will adopt their new approach to help determine whether similar movement constraints can be applied to other extinct animals, like early mammals; other joints, like forelimbs; and other modes of locomotion, like flying.

“We’ve given our colleagues the tools to improve their reconstructions of extinct animals, and to test whether their existing hypotheses about locomotion fall into the patterns we find,” Manafzadeh said. “But our next big goal is to figure out why these patterns exist.”

This work was supported by the National Science Foundation, the Bushnell Research and Education Fund, a Sigma Xi Grant-in-Aid of Research, the Society of Vertebrate Paleontology Cohen Award for Student Research, an Association for Women Geoscientists/Paleontological Society Winifred Goldring Award, and a Brown University Presidential Fellowship.