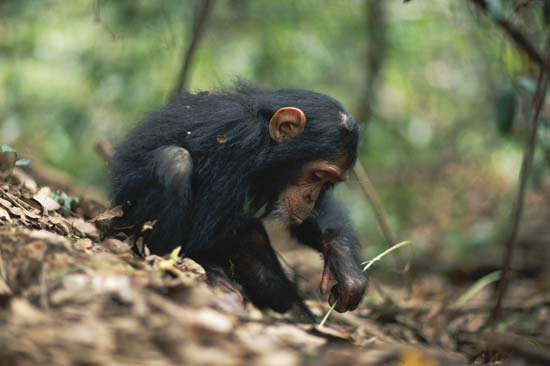 Tool use is ‘innate’ in chimpanzees

First evidence for a species difference in the innate predisposition for tool use in our closest evolutionary cousins could provide insight into how humans became the ultimate tool-using ape.

Chimpanzees show the most diverse range of tool use outside of humans. For example, chimpanzees use sticks to ‘fish’ for ants and termites, stones to crack nuts, as well as tools for grooming and communication. Bonobos rarely use tools and never to forage for food.

The question of ‘what makes a tool user?’ is a key one in human evolution, says researcher Dr Kathelijne Koops, and the origins of human tool mastery could lie in the gulf between tool use in chimpanzees and bonobos.

Is it to do with the environment the apes live in and the surrounding opportunities for tool use? Or perhaps the opportunities to learn from other apes through social contact? Or something deep-rooted. Something intrinsic.

Koops, in collaboration with colleagues from Kyoto University, conducted painstaking research tracking communities of wild chimpanzees and bonobos in Uganda and Congo for months, cataloguing not just all tool use, but also all potential for tool use in terms of the different environments and social time spent.

They also investigated the innate propensity for object manipulation in young apes, regardless of whether said object was deployed as a ‘tool’ – the first wild inter-species comparison of its kind.

The researchers found that environmental opportunities did not explain the difference in tool use. From nut trees to ant nests, stones to shrubs, the bonobos had access to as many tools and promising foraging opportunities in their stomping ground as the chimpanzees.

However, immature chimpanzees manipulated and played a lot more with objects than bonobos, and played with objects on their own. This was a difference already visible in very young individuals, says Koops. In fact, she says this is the first evidence for a species difference in the innate predisposition for tool use in our closest evolutionary cousins.

“Chimpanzees are object-oriented, in a way that bonobos are not,” said Koops, who conducted the work at Cambridge University’s Division of Biological Anthropology and at Zurich University’s Anthropological Institute and Museum.

“Given the close evolutionary relationship between these two species and humans, insights into the tool use difference between chimpanzees and bonobos can help us identify the conditions that drove the evolution of human technology.

“Our findings suggest that an innate predisposition, or intrinsic motivation, to manipulate objects was likely also selected for in the hominin lineage and played a key role in the evolution of technology in our own lineage,” she said.

The research was published on June 16, 2015 in the journal Scientific Reports.