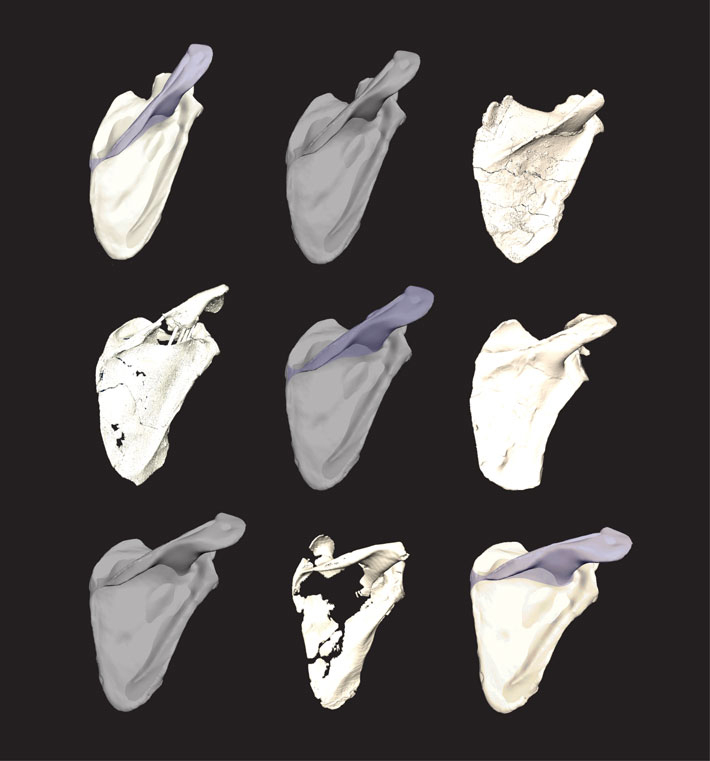 Shouldering the Burden of Evolution

UCSF study shows how early tool use shaped our body

As early humans increasingly left forests and utilized tools, they took an evolutionary step away from apes. But what this last common ancestor with apes looked like has remained unclear. A new study led by researchers at UC San Francisco shows that important clues lie in the shoulder.

What did the last common ancestor with apes look like?

Humans split from our closest African ape relatives in the genus Pan – including chimpanzees and bonobos – 6 to 7 million years ago. Yet certain human traits resemble the more distantly related orangutan or even monkeys. This combination of characteristics calls into question whether the last common ancestor of modern humans and African apes looked more like modern day chimps and gorillas or an ancient ape unlike any living group.

“Humans are unique in many ways. We have features that clearly link us with African apes, but we also have features that appear more primitive, leading to uncertainty about what our common ancestor looked like,” said Nathan Young, PhD, assistant professor at UC San Francisco School of Medicine and lead author of the study. “Our study suggests that the simplest explanation, that the ancestor looked a lot like a chimp or gorilla, is the right one, at least in the shoulder.”

The answer lies in the shoulder

It appears, he said, that shoulder shape tracks changes in early human behavior such as reduced climbing and increased tool use. The paper, titled “Fossil Hominin Shoulders Support an African Ape-like Last Common Ancestor of Chimpanzees and Humans,” published online Sept. 7, in the journal PNAS.

The shoulders of African apes consist of a trowel-shaped blade and a handle-like spine that points the joint with the arm up toward the skull, giving an advantage to the arms when climbing or swinging through the branches. In contrast, the scapular spine of monkeys is pointed more downwards. In humans this trait is even more pronounced, indicating behaviors such as stone tool making and high-speed throwing. The prevailing question was whether humans evolved this configuration from a more primitive ape, or from a modern African ape-like creature, but later reverted back to the downward angle.

The researchers tested these competing theories by comparing 3-D measurements of fossil shoulder blades of early hominins and modern humans against African apes, orangutan, gibbons and large, tree-dwelling monkeys. They found that the modern human’s shoulder shape is unique in that it shares the lateral orientation with orangutans and the scapular blade shape with African apes; a primate in the middle.

“Human shoulder blades are odd, separated from all the apes. Primitive in some ways, derived in other ways, and different from all of them,” Young said. “How did the human lineage evolve and where did the common ancestor to modern humans evolve a shoulder like ours?”

To find out, Young and his team analyzed two early human Australopithecus species, the primitive A. afarensisand younger A. sediba, as well as H. ergaster and Neandertals, to see where they fit on the shoulder spectrum.

“Finding fossil remains of the common ancestor would be ideal, however, when fossils are absent, employing such multifaceted techniques is the next best solution,” said Zeray Alemseged, PhD, senior curator of Anthropology at the California Academy of Sciences.

On the way of becoming human

The results showed that australopiths were intermediate between African apes and humans: the A. afarensisshoulder was more like an African ape than a human, and A. sediba closer to human’s than to an ape’s. This positioning is consistent with evidence for increasingly sophisticated tool use in Australopithecus.

“The mix of ape and human features observed in A. afarensis’ shoulder support the notion that, while bipedal, the species engaged in tree climbing and wielded stone tools. This is a primate clearly on its way to becoming human,” Alemseged said.

These shifts in the shoulder also enabled the evolution of another critical behavior – human’s ability to throw objects with speed and accuracy, said Neil T. Roach, PhD, a fellow of human evolutionary biology at Harvard University. A laterally facing shoulder blade allows humans to store energy in their shoulders, much like a slingshot, facilitating high-speed throwing, an important and uniquely human behavior.

“These changes in the shoulder, which were probably initially driven by the use of tools well back into human evolution, also made us great throwers,” Roach said. “Our unique throwing ability likely helped our ancestors hunt and protect themselves, turning our species into the most dominant predators on earth.”

However, this remarkable ability has trade offs — partly because of that downward scapular tilt, humans can throw fastballs, but are also prone to shoulder injuries. Today, Americans get approximately 2 million rotator cuff injuries each year, but not everyone is at equal risk. Because shoulder shape varies widely among modern humans, understanding these variations could help predict which people are more prone to injury.

”We could potentially use information about the shape of an individual’s shoulder to predict if they have a higher likelihood of injury and then recommend personalized exercise programs that would best help to prevent them,” Young said. “For a baseball pitcher, depending on your shoulder shape, you might want to emphasize some strengthening exercises over others to protect your rotator cuff.”

The researchers’ next step will be to analyze variability in the shoulder blade of modern humans and the genetic sequences that cause those differences to understand how these factors influence the likelihood to get rotator cuff injuries.

“Once we understand how the shape of the shoulder blade affects who gets injured, the next step is to find out what genes contribute to those injury prone shapes,” said Terence Capellini, PhD, assistant professor of human evolutionary biology at Harvard University. “With that information, we hope that one day doctors can diagnose and help prevent shoulder injuries years before they happen, simply by rubbing a cotton swab on a patient’s cheek to collect their DNA”.