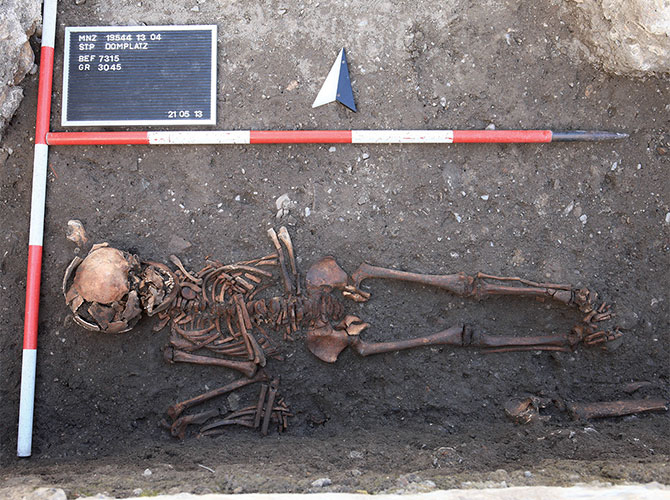 Syphilis widespread in Central Europe even before Columbus’ voyage to America

In 1495, a “new” disease spread throughout Europe: syphilis. Christopher Columbus was said to have brought this sexually transmitted disease back from his voyage to America.

At least, that has been the accepted theory up until now. Using morphological and structural evidence, researchers from the Department of Forensic Medicine and the Center for Anatomy and Cell Biology (bone laboratory) at MedUni Vienna have now identified several cases of congenital syphilis dating back to as early as 1320 AD in skeletons from excavations at the cathedral square of St. Pölten, Austria “The discovery clearly refutes the previous theory,” say study leaders Karl Großschmidt and Fabian Kanz of MedUni Vienna.

Congenital syphilis, which is passed from a pregnant mother to her unborn child, was primarily identified by changes to the teeth of skeletons from the 14th century. “We found so-called Hutchinson’s teeth with central notches and converging edges and mulberry molars, which are characteristic signs of syphilis,” study authors Kanz and Großschmidt (Department of Cell and Developmental Biology) explained. Their findings have now been published in the renowned Journal of Biological and Clinical Anthropology.

Thin sections of bones provide perfect examination results
The researchers at the Center for Anatomy and Cell Biology of the Medical University of Vienna prepared undecalcified bone thin sections from the bones and teeth of the skeletons for histological examination and analysis. These thin sections, which can only be produced in a few places throughout the world, where subsequently examined by a special light microscopy technique to morphologically determine the pathogen involved.

Up to now, a total of 9000 skeletons as old as the 9th century AD have been recovered from the excavations in the cathedral square in St. Pölten. The large number of unearthed individuals at one archaeological site is unique in Europe. The recovery was conducted in close collaboration with the Urban Archaeology Department of the state capital of Lower Austria. Additional studies of the living conditions and diseases evident from the skeletons were started.

This remarkable discovery of the earliest evidence of syphilis between 1320 and 1390 now awaits confirmation by molecular biological tests and proteomics (examination of the proteome using biochemical methods). The scientists hope to gain further insights from the proteomic analysis, in particular, because the DNA of syphilis decays very rapidly.